On 25 May 1795 the Sceptre 64, Captain William Essington, arrived at St. Helena from England in order to convoy home the East India Company trade. She brought with her news that the French invasion of the Netherlands had resulted in the subjugation of the Dutch, and although Captain Essington would not have been aware of the reformation of the Netherlands as the Batavian Republic, and its subsequent declaration of war against Britain on 15 May, he was able to advise St. Helena’s governor, Robert Brooke, that the Dutch possessions and shipping in the South Atlantic were now liable to occupation and detention.

Governor Brooke had seen extensive military service with the East India Company and had risen to the rank of lieutenant-colonel in the Army of Bengal. An enterprising man, he immediately held consultations with Essington and the island’s council with a view to attempting the seizure of the Dutch colony at the Cape of Good Hope before the French could arrive to take possession, it being understood that there were Dutch parties at the Cape who, although ignorant of the proceedings in Europe, would almost certainly prefer British to French rule.

An expedition being approved, discussions were then held with the captains of the East Indiamen in the harbour over the possibility of their joining the venture, and these centered on the danger a hostile Dutch force at the Cape would pose to the Company’s trade with India if it were free to co-operate with the French at Mauritius. Brooke’s proposals met with a mixed response, for although the governor received a conditional offer of assistance from the senior captain, John Strover of the Essex, and a more robust support from Captain William Taylor Money of the General Goddard, four of the other captains were less enthusiastic, and even Essington, who had been sent to St. Helena by the Admiralty to remove him from a delicate situation arising from his conviction for the murder of a whaler he was trying to press for service a year earlier, appeared more circumspect after further contemplation. Nevertheless, the hawks prevailed, and on 28 May orders for the mission were drafted.

Over the next few days three hundred troops, one hundred volunteer seamen, the governor, fieldpieces, and a treasure trove of money were embarked aboard the Sceptre and the East India Company ships General Goddard and Manship, Captain John Lloyd, together with a fast-sailing sugar ship, the Orpheus. No sooner was the expedition ready to depart however, than the East India Company packet Swallow, Captain William Clifton, arrived from the Cape on 31 May. She had been in the Dutch colony for the previous six weeks after delivering dispatches to the British resident, and she brought the interesting news that there were twenty Dutch East Indiamen at the Cape preparing to sail home, and that at least ten of these vessels were of a significant value.

On 2 June a further conference was held between Brooke, Essington, and the East India captains, in which it was agreed that the Dutch ships should be intercepted before the dispatch of any expedition to the Cape, and this decision was unexpectedly 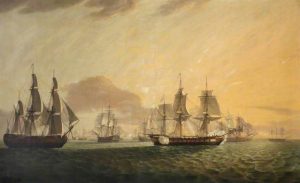 The capture of the Dutch East Indiaman Fleet.

corroborated later that day when the East Indiaman Arniston, aboard which the governor’s family was travelling to St. Helena, arrived from Portsmouth with correspondence from Rear-Admiral Sir George Keith Elphinstone announcing that he was bringing out a force to take possession of the Cape. Accordingly, the fieldpieces and treasure were disembarked, and sixty of the troops were taken aboard the Sceptre, with the remaining men, all of whom were trained in the use of artillery, being allocated to the General Goddard and Manship. A number of additional cannons were also placed aboard the two East Indiamen, and this force, to which the Swallow was added, sailed on the evening of 3 June to cruise to windward of the island in search of the Dutch fleet. Back on land, work continued to furnish more of the company ships with the armament they would require before being sent out to search for the Dutch.

Although the British did not know it at this time, sixteen Dutch East Indiamen had already sailed from the Cape on 18 May under the escort of the sloop Scipio 20 and brig Komeet 18. Eight of these vessels had later been forced back to the Cape by bad weather before sailing again on 22 May, and one of these, the richly laden Hougly, had soon lost company with her consorts in a gale. On 10 June, Essington’s improvised squadron intercepted the Hougly, and she was sent into St. Helena with the Swallow. Brooke immediately ordered the packet back to sea, and she departed in the company of the East Indiamen Busbridge, Captain Samuel Maitland, with additional men from the garrison having been placed aboard both vessels.

Throughout this period the unfavourable weather had made it difficult for Essington’s rudimentary squadron to keep in company, whilst the Lord Hawkesbury, Captain John Price, and Asia, Captain John Davy Foulkes, had been forced back to harbour after failing to weather the island. Eventually with the weather beginning to moderate, the Lord Hawkesbury, Essex, Asia, and Airly Castle, commanded by first officer Samuel Barnard following the death on the island of Captain John Gale, were able to get to sea and join in the hunt for the Dutch.

At 10 p.m. on the evening of 13 June, the General Goddard signalled to the rest of Essington’s force that she had discovered a fleet of seven sail in the north-east, and with the Asia, Essex, and Airly Castle also in sight a general chase began. These seven sail would prove to be those Dutchmen which had been forced back to the Cape before sailing without their escort on 22 May. That night the General Goddard passed through the Dutch ships without making any attempt to engage them, and at 8 o’clock the next morning, in clear weather and light winds, and with the squadron almost seventy miles to the north-east of St. Helena, the Sceptre fired a gun to bring the strangers to. At this time, the Swallow and General Goddard were still in company with the man-of-war, whilst the Busbridge was also in sight. In response the Dutch ships, still unaware of their country’s change in circumstances, hoisted their national colours and continued on their course. Captain Essington then ordered four 18-pound cannon to fire across their bows, to which the Dutch responded with several shot at the Sceptre and her consorts. All suitable warnings having been given, the man-of-war now fired two broadsides, and with the General Goddard letting fly with her own cannons the Dutch surrendered. No casualties on either side were incurred during this brief action.

According to Captain Money’s later testimony, the seven Dutch vessels were boarded by two boats from the Sceptre, four from the General Goddard, and one from the Swallow. During the course of these proceedings, several of the Dutch vessels reportedly attempted to make good their escape but were brought to by the guns of the General Goddard, and on the evening of 17 June, the Sceptre, General Goddard, Swallow, Asia and Busbridge, the latter two vessels having joined Essington after the Dutch surrender, returned to the island with the seven prizes to add to the Hougly.

By now all involved were calculating the value of the Dutch captures, and whilst Essington’s initial conclusion was that it was significantly higher than had at first been anticipated, some reports would later claim that the ships and their cargo were worth one and a half a million pounds, or around one hundred and eighty million pounds in today’s money. But who would benefit from the prizemoney? The commander of the garrison on St. Helena wasted little time in writing to Governor Brooke demanding a share for those troops who had been left on the island to do the duty of the men who had been taken to sea. His letter was forwarded to Essington, who replied that he did not believe any such claim would be valid, but it would in due course be settled by the Board of Admiralty. Others on the island also came forward to lay claim to a share of the prizes, and it soon became evident that the matter would long remain in contention.

Meanwhile, on 2 July, the Sceptre left St. Helena with a convoy consisting of nine East India Company ships, seven Dutch prizes, and seven other vessels. On 21 August they fell in with the sloop Discovery, Captain George Vancouver, which was returning to England from the Pacific Ocean after her four-year voyage of exploration, and which in company with her consort, the Chatham, and the Arniston had also taken a Dutch East Indiaman off St. Helena. The voyage northwards was steady if slow, as the Dutch ships were in a poor condition and had to be towed, but the weather remained boisterous and it eventually accounted for the Hougly, which had to be destroyed once her cargo had been removed. On 12 September the convoy eventually arrived in the Shannon where it remained until a more substantial force could arrive to escort it through the Channel. Here it was deemed that all but one of the five remaining Dutch East Indiamen were unseaworthy, and so their cargo was unloaded to be forwarded to England on other vessels. The remaining Dutch East Indiaman with nine homeward-bound British East Indiamen finally left the Shannon on 8 October with the Sceptre having been joined by the Apollo 38, Captain John Manley, Diana 38, Captain Jonathon Faulknor, Cerberus 32, Captain John Drew, and the Seahorse 38, Captain John Goodwin Gregory Peyton. Passing Portsmouth on 14 October, the convoy sailed around to the Downs from where the Indiamen proceeded up the Thames

As early as 7 August an officer had arrived at the Admiralty with Essington’s dispatches announcing the capture of the Dutch East India fleet, and so delighted with the loss to the Batavian coffers were the government that once the convoy was safely harboured the lord chancellor, Lord Loughborough, the prime minister, William Pitt, the secretary of state for war, Henry Dundas and his wife, Lady Jane, undertook a visit to the Sceptre off Deal on 17 October. In turn, Captain Essington was honoured with an invitation to Pitt’s residence at Walmer Castle.

There followed the expected protracted dispute over the allocation of prize money, with the initial contention being whether the prizes should be deemed Droits to the Crown, as the captors had not been aware that war had been declared on the Batavian Republic before their capture. With that matter settled by a court in June 1796, the matter of the value of the cargo was investigated, for the sale of the goods had only realised £96,000, which was far less than the original estimation. An Admiralty official was sent to the Shannon to find out why, and his report was to claim that plunder on a grand scale had taken place, not least by Naval officers who had since disappeared.

In November 1797 the Lords of Council produced a complicated formula that allowed funds to be distributed to the various parties, dependent on the level of their involvement in the enterprise. Thus, all the ships involved in the capture, or which had been present at St. Helena, in addition to the governor, garrison officers and troops, enjoyed varying shares, with a portion also being retained for the Exchequer. Yet three months later, although the East India Company had been ordered to make a pay out, Essington had to write to Pitt seeking his help in obtaining the money, whereupon in response the company claimed that they could not pay as they were waiting for overdue funds from the government! Eventually the money was released, but still counter claim followed counter claim, and even as late as 1824 Essington and his crew were to receive a further pay-out.