The Navy Conveys Princess Caroline of Brunswick to England – March 1795

Captain John Willett Payne had long been a friend and confidant of George, the Prince of Wales, enjoying riotous times with him throughout the 1780’s and earning the dubious honour of being appointed his ‘secretary’. Thus, when the Navy was detailed in the autumn of 1794 to send a squadron of yachts to collect the prince’s bride, Her Royal Highness Princess Caroline of Brunswick, from the continent and bring her to England, it was no surprise that Captain Payne was appointed to lead it. He therefore relinquished his command of the Russell 74 to an acting captain, Thomas Larcom, and raised his broad pennant aboard the yacht Augusta.

Unfortunately, in what would prove to be a most bitter winter, the weather was to long detain the squadron, and suggestions in October 1794 that the princess would be arriving ‘within the course of the next month’ soon proved to be wildly inaccurate. During the delay it was decided that an armed force should accompany the yachts, and in November it was reported that Payne would sail in the first week of January for Hamburg to collect the princess. In the second week of December the commodore and Captains Hon. Robert Stopford of the Phaeton 38, Hon. Arthur Kaye Legge of the Latona 38, and the newly promoted Captains William Browell of the yacht Princess Augusta and Richard Bagot of the yacht Mary, kissed hands with the King prior to taking their leave. Shortly afterwards the squadron dropped down the Thames for Sheerness where the captains were to join their ships prior to sailing for Margate where a collection of royal flunkeys, including the prince’s mistress Lady Jersey, his horse-racing intimate, the Earl of Clermont, and his personal physician and the ex-physician of the fleet, Sir Gilbert Blaine, were expected to embark. Payne was also to have the responsibility of delivering a diamond present to the princess, worth ten thousand pounds, or £1.2m in today’s money. 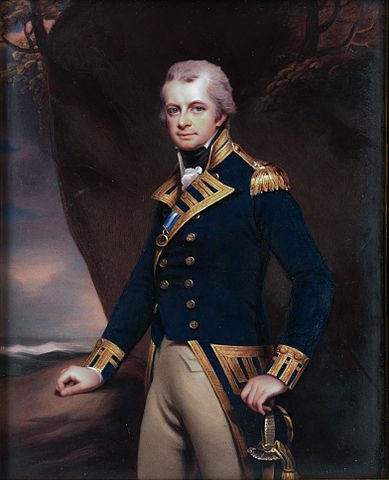 Raising his commodore’s broad pennant at sunrise on New Year’s Eve off Sheerness aboard the Jupiter 50, Captain William Lechmere, and offering a thirteen-gun salute to the flag of Vice-Admiral John Dalrymple, Payne’s squadron put to sea that Wednesday morning at 7 a.m. and an express was sent to the Prince of Wales at Carleton House with the happy tidings. The next news received in London from the squadron was not so promising, for by Sunday 4 January it was no nearer the continent than off the Nore, where it had remained wind bound. Payne, who at the time was in the news both as a putative lord of the Admiralty and the prime witness for the overdue court-martial on Captain Anthony James Pye Molloy to investigate that officer’ conduct at the Battle of the Glorious First of June, was then advised by the captain of a Dutch schuyt that the coast of Holland was impenetrable due to thick ice, and so he decided to return with his ships to Sheerness.

Learning of the aborted mission, the Prince of Wales gallantly set out for the Kentish port on Friday 9 January to accompany Lady Jersey back to London, and the next evening Payne himself arrived in town. News received from Brunswick shortly afterwards indicated that Caroline was still in the city and would not depart for another six weeks unless an early winter thaw set in. Meanwhile, rumours at home frivolously attributed the return of Payne’s squadron to a mutiny, that is to say not on behalf of the ship’s company but rather due to a disagreement between the commodore, Lady Jersey and Lord Clermont as to who would have the honour of hosting the royal bride on her passage to England, with Payne claiming that his vessel’s accommodation was superior to the yachts on which the others had embarked.

On 17 February Payne took leave of the Admiralty after a messenger had been sent abroad advising the princess that she could be collected from Cuxhaven at the mouth of the Elbe. Again the squadron, led by the Jupiter which had been fully fitted out to accommodate Caroline, remained wind bound, but at least this time the commodore did not have to worry about Lady Jersey who had stayed behind in London, presumably to keep the prince’s bed warm pending the arrival of his bride.

At 5 a.m. on Monday 2 March the squadron consisting of the Jupiter, two frigates, three sloops, four cutters and the royal yachts, was able to unmoor from the Nore and put to sea. By noon the next day it was some twenty miles to the north-west of the Texel, and on the 4th it sailed past the Terschelling Islands. The next morning was foggy, and Payne despatched the cutter Coburg to reconnoitre the land whilst the remainder of the squadron dropped anchor for the rest of the day. On the morning of the 6th the weather cleared, allowing not only for the identification of the Heligoland light to the north, but also the chilling realisation that the sloop Lark 16, Commander Josias Rowley, was no longer in company. The cutter Rose was sent to collect pilots from the island, and they eventually arrived on board the Jupiter at midday, perhaps somewhat awed by the requirement to find a safe mooring for what was one of the biggest ships ever to seek shelter there. Next day, in thick rainy weather, the squadron without the missing Lark came too off Cuxhaven.

It was now that the squadron’s difficulties really began, for as well as having to contend with bitter winter gales and heavy snow, the ships were assailed by ice floes which tore away the marker buoys, and indeed by whole fields of ice hurtling out of the blocked River Elbe. On board the Jupiter the lower yards and topgallant masts were struck down on deck, but then the sloop Hawke 16, Commander George Bowen, which had suffered extensive damage to the elements, smashed into her side. Fortunately, daylight allowed rudimentary repairs to be effected to the Hawke, and with the weather beginning to moderate on the morning of the 9th her crew was able to stabilise her. In the meantime the commodore had dispatched a messenger to the British diplomat attending Princess Caroline at Brunswick, Lord Malmesbury, advising of the squadron’s arrival, but the bride’s prompt appearance was not expected due to the almost impassable roads, and in any event there were concerns that the ice or a strong gale might force the ships back to sea at any moment.

On the 11th there was some good news when the Lark reappeared, but three days later the weather deteriorated once more and the lower yards and topgallant masts were struck down on deck again. At 2 o’clock in the morning the Jupiter was struck athwart ships by a massive ice floe which also carried her best bower aboard, and in the dead of night she began driving towards the shore. Desperately, the frozen crew pawed at the ice-covered sheets and cables until she eventually brought to under her best bower, and this enabled her to be re-berthed on her small bower. However, no sooner had she anchored than another sheet of ice smacked into her sides and sent the small bower aboard. Once more the best bower was let out, only for the crew to watch in horrified disbelief as it crashed down on to the ice without penetrating through it. The ship began drifting towards an apparently inevitable demise until at length a crack in the ice allowed the cable to slip through it, and with the spare anchor also being let go she providentially held fast. Such had been the Jupiter’s perilous situation and the appalling weather conditions however, that reports of her loss soon began to circulate back home. 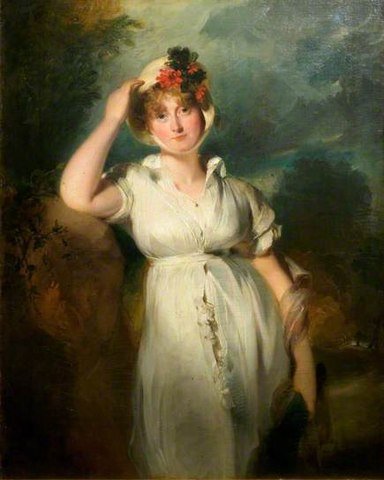 The atrocious winter weather continued for another week or more, during which period the frigate Phaeton was driven out to sea, prior to rejoining two days later. When the conditions did begin to relent repairs to the vessels were undertaken at Cuxhaven, and at last, on the much calmer late afternoon of Saturday 28 March, a cutter flying the princess’ standard put out of the Elbe. The Jupiter’s first lieutenant, Jemmett Brown Mainwaring, set off in the ship’s barge attended by all the boats of the squadron to greet her, and when the royal standard was unfurled on the barge indicating that Caroline was under the Navy’s protection the ships fired a twenty-one-gun salute. Finally, with the sun setting at 6 pm, the princess and her suite led by Lord Malmesbury and Mrs Mary Harcourt, and with a Dutch admiral in attendance, were received upon the Jupiter.

At 8 a.m. on Sunday 29 March the squadron weighed anchor and set sail from Cuxhaven with a promising east north-easterly wind which it retained until Wednesday, but then a thick fog forced the ships to drop anchor and they could only maintain contact by firing hourly fog-guns. They remained in this situation throughout Thursday, by which time the change in the weather had affected the hitherto cheerful princess who became indisposed. Happily, at 4 a.m. on Friday, a significant improvement in the weather allowed the squadron to weigh anchor, it was off Harwich by noon, and at 6 p.m. it received the salute of the Nore guardship Sandwich 90, Captain James Robert Mosse.

Proceeding up the Thames, at 7.30 on the evening of 3 April the squadron arrived off Gravesend where the princess slept aboard that evening. At sunrise the next morning the commander-in-chief at the Nore, Vice-Admiral Charles Buckner, paid his respects, and later that day Caroline removed to the yacht Augusta commanded by Captain William Browell. Her voyage ended at about noon when she was escorted ashore at Greenwich to be greeted by the governor of the hospital, Admiral Sir Hugh Palliser, and here she was turned over by the Navy to the care of the Horse Guards in order to set off for town.

To honour their participation in this mission, Commander Josias Rowley of the Lark 16, Commander Charles Garnier of the Martin 16, and Commander George Bowen of the Hawke 16 were all posted captain on 6 April, whilst on the same day Lieutenants Jemmett Brown Mainwaring and Hon. Courtenay Boyle of the Jupiter enjoyed promotions to the rank of commander. Unhappily, Commodore Payne enjoyed no such benefit from his leadership of the mission, for although he had formed a friendship with Princess Caroline, it was reported towards the end of April that he had resigned his role in the Prince of Wales’ household as a consequence of ‘the inflexible displeasure’ of a lady at court ‘whom he was to have carried out to meet the princess’. Clearly, Lady Jersey had engineered his removal from favour.

As for the Prince of Wales, he was without doubt the biggest loser of all, for upon meeting his bride, who at best had been described by the newspapers as ‘en bon point’, but at worst was reported to be fat, ugly, uncouth and with appalling body odour, he demanded a glass of brandy and remained in a drunken stupor until his wedding day on 8 April. After fulfilling his patriotic duty by conceiving a child he quickly discarded the princess, and she took up residence at Blackheath to enjoy the alternative favour of several prominent gentlemen including Captains Sir William Sidney Smith and Thomas Manby. The latter officer in particular would remain a firm favourite, and at Caroline’s funeral in 1821, where her popularity amongst the general public led to remarkable scenes of disorder, he was seen to weep openly.