Captain Bligh and the Mutiny on HMS Defiance – 19 October 1795

The Defiance 74, Captain Sir George Home, which formed part of Rear-Admiral Thomas Pringle’s northern-based squadron from Admiral Adam Duncan’s North Sea Fleet, was at anchor in the Leith Roads during October 1795 when disaffection amongst her crew led to a night of increasingly serious disturbances, including shot-rolling and break-ins to the spirit room. The next morning, Captain Home and his officers seized and placed eight leaders of the riot in irons, whereupon the remainder of the crew broke out in mutiny and refused to attend to their duty. That evening, the men demanded the release of the ringleaders, whereupon Home had to accede, there being no marines aboard the Defiance to support him.

Ostensibly, the men of the Defiance were outraged because of their captain’s insistence in giving them five-water, rather than three-water grog. Such a complaint may have appeared inconsequential when compared to the enormity of the crime of mutiny, but the men had recently endured a long cruise off the Norwegian coast with little in the provision of warmth and comfort, and their discontent had been fed by Horne’s refusal of leave ashore upon their return to Leith, and by a ban on all women bar wives from coming aboard the Defiance. 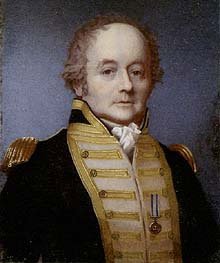 With a crew consisting predominantly of tough, hardened, and independently minded fishermen and north-eastern collier-men, and with many Irishmen aboard, the resolution amongst the hands had grown quickly; indeed, even a number of previously loyal and sensible men had thrown their weight behind the insurrection, although those who were truly loyal were labelled ‘royalists’ with the demand that they should immediately be turned out of the ship. Appropriating the revolutionary term ‘Liberty!’, the mutineers insisted on new officers to replace their captain and first lieutenant, and more shore leave in addition to less water in their grog.

Come the next morning, Pringle despatched Captains William Lechmere of the Jupiter 50 and John M’Dougal of the flagship Asia 64 to order the men to return to their duty, and to receive aboard a party of soldiers in order that discipline could be maintained, for the crew of the Defiance had not only rebelled against their officers but had also taken to fighting amongst themselves. Unsurprisingly, the mutineers refused to accede to both instructions.

Pringle characteristically prevaricated over what action to take next, and seeking assistance and advice he wrote to the Admiralty and to the local Army commander-in-chief, Lord Adam Gordon. In the meantime, his other ships in the roads stood guard over the Defiance, prominent amongst which were the Edgar 74, Captain Sir Charles Knowles, who was a well-known pacifier of explosive situations, and the Calcutta 54, Captain William ‘Breadfruit’ Bligh, who of course had an entirely contrasting reputation due to the mutiny on the Bounty six years earlier. The possibility of a general outbreak amongst the all the ships in the roads, and in particular aboard the Edgar, was not lost on the officers however, and there were strong reservations as to whether the crews would open fire upon the Defiance if it were required to bring her back to duty. Fortunately, Bligh was to prove instrumental and influential in planning a sensible solution to the situation in the lieu of any positive action from his admiral.

Bligh recommended that the best method of subduing the men was to embark a body of troops on board one of the other sail of the line and lay her alongside the Defiance to allow the soldiers to scramble across. The suggestion being accepted, two hundred men were embarked for this purpose, but then no doubt reflecting on the general concern that the seamen on his ships might not prove steadfast, Pringle changed the plan and ordered Bligh to subdue the Defiance with a boarding party of eighty soldiers in the ships’ boats.

Splitting the boats provided for the enterprise into two divisions so as to board the rebellious ship from either gangway, Bligh and the major commanding the troops took to the water. Ignoring threats from the Defiance to sink the boats, mainly because their rapid approach had not left the mutineers time to do so anyway, Bligh encouraged his force to keep advancing. Even so, one boat was stove in by a shot thrown through a gun port. Once alongside, Bligh forced his way aboard the disaffected ship and onto the poop deck, and although a few men did threaten him, the majority of the Defiance’s crew proved to be subservient. Thereupon, the soldiers gained entry to the ship without hindrance, the mutineers were compelled to stand down without any further mischief, and the eight men who had originally been placed in irons, in addition to another nine, were arrested.

So it was that in one of the great ironies of naval history, Captain Bligh had brought a mutinous ship back to duty without bloodshed, although typically, and probably justifiably, the ‘Bounty Bastard’ complained fervently at the failure of Admiral Pringle and Captain Home to help the loyalists amongst the Defiance’s crew in subduing the insurrection in the first place.

On 4 February 1796 the court martial on the mutineers concluded at Sheerness after an unprecedented three-week long trial. Nine men were sentenced to hang, six to receive floggings around the fleet of between one hundred and three hundred lashes each, and two men were acquitted. The nine men condemned to death were removed from the Jupiter by a strong guard of marines, and although four were reprieved with a rope around their necks after receiving the King’s Pardon, the other five were hung aboard the flagship Sandwich 90 at the Nore on 8 March.