The British frigates Dido 28, Captain George Towry, and Lowestoffe 32, Captain Robert Gambier Middleton, had been in passage for only one day from Minorca for the Hyères Islands, having been dispatched by the commander-in-chief of the Mediterranean Fleet, Admiral William Hotham, to seek information as to the whereabouts of the French fleet, when in the early hours of 24 June, some hundred miles to the north-east of Minorca, they discovered two larger French frigates in their path. These vessels would prove to be the Minerve 40 and the Artémise 32, and they had been dispatched under the command of Commodore Jean-Baptiste -Emmanuel Perrée of the larger frigate on a similar mission by the commander-in-chief of the Toulon Fleet, Vice-Admiral Pierre Martin, to discover the whereabouts of Hotham’s fleet.

Recent studies indicate that the Dido had probably been named after Dido Elizabeth Belle, the daughter of the influential Captain Sir John Lindsay, and of a West Indian slave, Maria Belle. The frigate had been commissioned in 1787 and carried an armament of twenty-four 9-pounder cannons on her upper deck, four 6-pounder cannons on her quarterdeck, and four 18-pounder carronades on her quarterdeck and forecastle, giving her a broadside weight of metal of one hundred and fifty-six pounds. She had a compliment at this time of one hundred and ninety-three men, and her captain, 28-year-old George Henry Towry, was the son of a commissioner in the Victualling Office, had seen a good deal of service with Prince William, and was a post captain of a mere one year’s seniority. 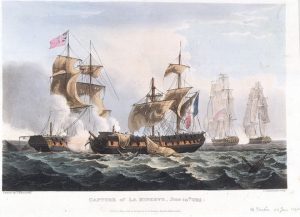 The capture of the Minerve.

The Dido’s consort, Lowestoffe, was an aged frigate, having first been commissioned in 1761. Both Horatio Nelson and Cuthbert Collingwood had served aboard her as lieutenants in the late 1780’s but she had not been able to attain any great distinction in her career to date. She boasted an armament of twenty-six 12-pounder cannons on her gun deck, and six 6-pounders on her quarterdeck and forecastle, together with four 18-pounder carronades which gave her a broadside weight of metal of two hundred and ten pounds. She had a crew of two hundred and twelve men, and her captain, 30 year-old Robert Gambier Middleton, was the nephew of the recently installed First Naval Lord, Admiral Sir Charles Middleton, and a post captain of just ten months standing.

The Minerve was a new ship that had only been commissioned in the previous October. She carried twenty-eight 18-pounder cannons on her gun deck, and twelve 8-pounder cannons and two 36-pounder carronades on her quarterdeck and forecastle, equating to a broadside weight of metal of three hundred and thirty six pounds. Her crew at the time of the engagement numbered three hundred and eighteen men and her commander, the thirty-three year-old Commodore Perrée, was an accomplished frigate captain who as a lone raider and squadron leader had taken almost a hundred British merchant vessels since the beginning of the war. The Artémise had been commissioned a month later, in November 1794, and appears to have carried an armament of twenty-six 12-pounder cannons on her gun deck, ten 6-pounder cannons on her quarterdeck and forecastle, and four 36-pounder carronades, giving her a broadside weight of metal of two hundred and fifty eight pounds, although various reliable sources have since quoted a figure of two hundred and eighty-three pounds. She was designed for a crew of two hundred and sixty-four men.

At the time that the British frigates came upon their enemy, the Dido and Lowestoffe were standing close-hauled on the larboard tack with the wind coming in from the north-west. Being the senior officer, Captain Towry raised the signal of recognition, but this failed to generate a response. Meanwhile, having initially gone about and stood away, the French frigates suddenly displayed an inclination to take on the British vessels, and the Minerve bore down upon them under easy sail at 8 a.m. with the Artémise some distance in arrears. A half-hour later, being about a mile off the Dido’s larboard and weather-bow, Commodore Perrée wore ship on to the same tack as his enemy and opened fire. Towry did not immediately respond but kept his powder dry for a further quarter-hour until the Dido had come up on her larger opponent’s starboard beam, whereupon she commenced a persistent cannonade.

Within as little as five minutes it became apparent to Towry that the Minerve, being almost twice her size, intended to ram the Dido, and he threw his helm up in the nick of time to absorb what could have been a fatal blow. Instead, the Dido received the Minerve’s bowsprit in her mizzen rigging as the French frigate’s starboard bow crashed into her larboard quarter. Under a fusillade of musketry the French tried to board, but they were met with the stout resistance of the pike-men on the Dido’s quarterdeck, whilst the huge swell that was running created its own disadvantage by smashing the Dido’s hull repeatedly into her opponent and then carrying it away again. Under these circumstances the two spars that held the ships together, these being the Dido’s mizzen mast and the Minerve’s bowsprit, were only able to survive the initial impact for a quarter hour before they came down, drowning eight or more Frenchmen as their bowsprit tumbled into the sea. Freed from this encumbrance, the Minerve then grinded along the Dido’s larboard beam as the contest between the gunners resumed, and before she passed clear ahead her lower yards had torn away the British frigate’s fore and main topsails.

Up until this point the Lowestoffe had been unable to join the action because of the Dido’s position, but with both ships trying desperately to clear away the wreckage, Captain Middleton moved up on the Minerve’s larboard bow at 9 a.m. and from close range poured in several broadsides. During the next ten minutes his command carried away the Minerve’s foremast, together with her main and mizzen topmasts, whereupon the Artémise, which had been firing into the melee from long range, decided to flee and leave her disabled compatriot to her fate.

At this point, being confident that the disabled Minerve was in no condition to effect an escape, Captain Towry ordered the Lowestoft off in pursuit of the Artémise. The chase of the smaller French frigate saw only the respective party’s chaser guns come into play, and when the Lowestoffe suffered a wounded mizzen mast that prevented her from carrying a topsail she gradually lost ground on her quarry. Sensing the futility of maintaining the chase, Towry signalled the Lowestoft’s recall at 10.30. Both British frigates then bore down upon the Minerve, and at 11.30 Captain Middleton commenced a raking fire which fifteen minutes later brought down the Frenchman’s mizzenmast, taking with it her colours and leaving Commodore Perrée with little option but to hail his surrender.

The Minerve was carried into Mahon by the two frigates from where Towry wrote his dispatch on 27 June and sent the cutter Fox to appraise Admiral Hotham in Martello Bay, Corsica, of the capture. In his dispatch Towry reported four men killed and eleven wounded aboard the Dido, and he advised that his first lieutenant, Richard Buckol, was in a severe condition, although happily he was to survive. These casualty figures were later revised by historians to number six men killed and fifteen wounded. Additionally, three men were wounded aboard the Lowestoffe, whilst the Minerve’s casualties were reported to number more than thirty. The commander of the Artémise, who it is understood was Lieutenant de Vaisseau Decasse, later faced a court martial into his conduct but was acquitted of any blame for the loss of the Minerve.

The capture was well received in Britain, with the first lord of the Admiralty, Earl Spencer, personally sending his congratulations to the senior captain’s father, Commissioner Towry. Captain Towry was rewarded with the command of the Minerve, although he only enjoyed her for a year before moving into the Diadem 64, which he later commanded at the Battle of St. Vincent in 1797. After being invalided ashore in 1804, he filled several civil positions but died after a short illness in 1809, aged 42. Meanwhile, the first lieutenants, Richard Buckoll of the Dido and Joshua Sydney Horton of the Lowestoft, were promoted commander for their part in the action. For his part, Commodore Perrée was soon exchanged, and after returning to Toulon in August he remained a thorn in the British side until his death in action aboard the Généreux four and a half years later.

The Minerve was subsequently commanded by Captain George Cockburn, and she flew Commodore Horatio Nelson’s broad pennant when capturing the Spanish frigate Santa Sabina 40 in December 1796; however, she was retaken by the French in July 1803 when she went aground and was forced to surrender after enduring a ten-hour bombardment off Cherbourg under the command of Captain Jahleel Brenton. The Dido retired from active service in 1800 having had no further opportunities for distinction, whilst the Lowestoffe was wrecked on the Jamaican station in August 1801 under the command of Captain Robert Plampin, but without loss of life.