At the beginning of the year Britain had eighty sail of the line in commission, and with Parliament voting to pay for eighty-five thousand men it ensured that the equivalent of roughly one per cent of the population would be available for employment in the Navy. In December Prime Minister William Pitt, disdaining nepotism in an age when it was rife, wisely decided to replace his ineffectual brother, the Earl of Chatham, as first lord of the Admiralty, and to trust this investment to the abler Earl Spencer.

The French purge of the aristocracy from their officer corps continued with the esteemed American War of Independence veteran, Charles Henri Jean-Baptiste, the Comte d’Estaing, being condemned to death in April, and the ‘Reign of Terror’ only ended with Robespierre’s own execution in July. His demise allowed the release of many experienced officers who had been imprisoned awaiting their fate, and many of these would find employment under the new Republic. On land, French armies earned victory in sixteen pitched battles against the First Coalition, capturing over a hundred cities, expelling the allies from Belgium and the Netherlands, and establishing a new frontier on the Rhine 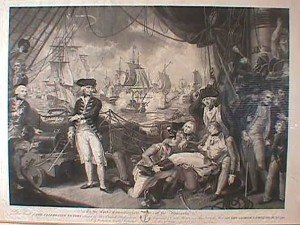 The most important engagement in 1794 was the Battle of the Glorious first of June.

The French necessity to see their West Indian and American convoys safely home occasioned the first battle of the war, that of the Glorious First of June, when Rear-Admiral Louis Thomas Villaret-Joyeuse’s Brest fleet was engaged by the Channel Fleet under the command of Admiral Lord Howe in the Atlantic. The battle resulted in a defeat for the French and was celebrated by a monarchy and nation who had wished to put the disappointment of the Channel’s Fleet’s 1793 campaign behind them; however, it was far from the annihilation that would have removed the threat of the Brest fleet for the duration of the war, whilst the confrontation also allowed the desperately needed American convoy to slip past the British and reach the mainland. Throughout the rest of the year Lord Howe maintained a loose blockade of Brest in order to preserve his fleet, and one of the consequences of this policy was the capture of the Alexander 74 by a flying squadron under Rear-Admiral Joseph Marie Nielly on 6 November. Fortunately, the frigate Hind 28 escaped capture by five French frigates off Alderney on 13 January, whilst only the daring and local knowledge of Captain Sir James Saumarez saved his small squadron from a superior French force off Guernsey on 8 June. Britain’s greatest success in the Channel lay with Commodore Sir John Borlase Warren’s frigate squadron which took two French frigates and a corvette off the coast of Brittany on 23 April, destroyed the frigate Volontaire 36 off Brittany on 23 August and captured the frigate Révolutionnaire 40 on 21 October.

In the Mediterranean Vice-Admiral Lord Hood kept watch off Toulon as the French hurriedly refitted following the previous year’s occupation, whilst detachments of his fleet eventually took Corsica in August after opening their campaign in February. When the French fleet did come out any hopes of a conclusive action were dashed by a failing wind in the Golfe Juan on 12 June. At the end of the year Hood returned home in poor health, being temporarily succeeded by Vice-Admiral William Hotham. The only action of note was the capture by the Romney 50 of the French frigate Sibylle 36 off Mykonos on 17 June, but there was a fortunate escape for Captain Samuel Hood of the frigate Juno 32, who being unaware of his cousin’s departure the previous December entered Toulon Harbour on 11 January, and was obliged to extricate his command under heavy fire.

After Rear-Admiral Alan Gardner’s insipid Leeward Islands campaign of 1793, Vice-Admiral Sir John Jervis and General Sir Charles Grey arrived at Barbados in January 1794 to commence what would prove to be an ultimately mixed yearlong campaign against the French West Indian possessions. They captured Martinique in a brilliant amphibious assault on 22 March, but although St. Lucia was conquered on 4 April and Guadeloupe on the 20th, half of the latter island was retaken by the French on 3 June. Yellow fever soon accounted for a large part of the British force, resulting in their final departure from the island on 10 December. In his ensuing determination to establish the island as a republican stronghold, the conqueror, a commissioner from the French Convention by the name of Victor Hugues, put twelve hundred royalists to death. Meanwhile Jervis and Grey had already resigned in the autumn after the secretary of war, Rt. Hon. Henry Dundas, had refused to support them against corruption claims, and by the end of the year they were heading back to Britain.

The commander-in-chief of the Jamaican station, Commodore John Ford, took Port au Prince on Saint- Domingue in a combined operation on 4 June, before the French drove out the British garrison in December.

In the East Indies, the sole British sloop left behind by Rear-Admiral Hon. William Cornwallis on his departure in 1793 was joined in the spring of 1794 by four men-of-war. The Orpheus 32, commanded by the temporary commander-in-chief, Commodore Henry Newcome, captured the French Duguay-Trouin 34 on 5 May, but a brutal yet indecisive action with a French squadron off the Isle de France on 22 October involving the Centurion 50 and Diomede 44 led to the court-martial and dismissal of the latter’s captain, Matthew Henry Scott, although he was later reinstated. In September Cornwallis’s successor, Commodore Peter Rainier, arrived at Madras.

Leading citizens in Hull called for justice after Captain William Essington of the frigate Aurora caused the death of a man he was trying to press on 19 July, and jurisdiction was also required to settle a claim for prizemoney by the officers and crew of the frigate Carysfort, which re-took the Castor on 29 May after this frigate had been captured by the French nineteen days previously. Elsewhere, a mutiny aboard the Culloden 74 at Spithead on 3 December would result in five men being court-martialled and hung.