With the wind veering to the east the next evening, the squadron shaped a course for Ushant in the hope of cutting off any French ships coming out of Brest with that same favourable wind. This decision proved to be vindicated when at dawn on the 21st October, some twenty-five miles to the west of Ushant, they sighted an unknown frigate to leeward which would prove to be the Révolutionnaire 40. With the British squadron holding the weather gauge the Frenchman was cut off from the land, and a pursuit began which saw Nagle’s command soon outstrip her consorts.

The Artois, which had only been launched on 3 January at Rotherhithe, carried twenty-eight 18-pounder cannon on her upper gun deck, twelve 9-pounder cannon on her quarterdeck and forecastle, in addition to four 32-pound carronades, giving her a broadside weight of metal of three hundred and seventy pounds. She had a crew of two hundred and eighty-one men, and her captain, the 37-year-old Nagle, was an experienced officer who had only joined her three months previously. An Irishman by birth, he had been orphaned at an early age, and his upbringing had been greatly influenced by his second cousin, the eminent politician and philosopher, Edmund Burke. 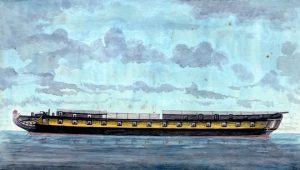 The hull of the Revolutionnaire.

The Révolutionnaire was a large new frigate which had been built at Le Havre and was on her maiden voyage, having left that port for Brest eight days previously. She carried an armament of twenty-eight cannon on her main deck and sixteen cannons on her quarterdeck and forecastle with an apparent broadside weight of metal of four hundred and three pounds. Her captain was Antoine René Thévenard who was of a similar age to Nagle, and she carried a very raw crew of three hundred and fifty-one men. She also had installed a furnace for heating red-hot shot, but although his lieutenants urged him to make use of this device Captain Thévenard declined to do so.

By 8 a.m. the Artois was in gunshot of the larger Révolutionnaire whilst her consorts were still a long way astern. Seeking to get alongside the Frenchman and engage her at pistol-shot range, Nagle did not respond when the Révolutionnaire opened up with her stern chasers, and at 9 a.m. he had the satisfaction of seeing the other vessel shorten sail and hoist her national colours. In return he ordered the top-gallant studding sails and royals taken in, and the Artois’ own colours fluttered aloft. At about 9.15 the British frigate ranged up on the enemy’s stern and let loose a broadside accompanied by a volley of small-arms fire to which the Frenchman replied in kind and a ferocious engagement began.

The first twenty minutes or so of the action saw both crews slugging it out with neither gaining an apparent advantage, and although the Révolutionnaire’s colours were shot away they were quickly replaced, much to the disappointment of the Artois’ crew who had given three hearty cheers on the assumption that their enemy had surrendered. Thereafter the exchange of round, double-headed and grape shot became even more intense and furious, with the Artois’ Scots-born lieutenant of marines, Mr Craigy, having his thigh and leg taken away by an 18-pound ball that also smote a seaman on the other side of the deck.

After about forty minutes of this mutually inflicted carnage the approach of the rest of Pellew’s squadron, and in particular the Diamond’s assumption of a raking position across the Révolutionnaire’s stern tipped the balance fully in the Artois’ favour. Upon Captain Smith’s frigate firing two warning shots, the French crew accepted their inevitable defeat and downed arms, even though their gallant captain had been determined to fight on. Shortly after her colours were reluctantly struck the breakers of the Isle de Saintes were seen through the haze ahead. Although the French vessel had suffered a lot of punishment that had left her crippled, the Artois’ condition was not much better and she would be required to fish both her fore and main masts before she could sail for Portsmouth.

The Artois’ first lieutenant, Robert Dudley Oliver, was sent across to take possession of the Révolutionnaire, and upon going aboard he received the French officers’ swords. During the action the Artois had lost three men killed, including her lieutenant of marines, Mr Craigy, who had died within half an hour of incurring his injuries, and suffered five men wounded. The Révolutionnaire lost eight men killed and five wounded, including Captain Thévenard, who received a slight injury to his arm.

In his dispatch to the Admiralty dated on 24 October off The Start, Pellew, who was as good a judge as any, praised Nagle and claimed that the victory would have been his even had the squadron not been in attendance. Some later historians found this assertion debatable, and it can probably be stated that without the presence of the rest of the British squadron the Artois would have suffered far more casualties and damage before she could have prevailed over her game opponent. With the Artois and her prize heading for Portsmouth the remainder of the squadron took the French prisoners who had been removed from the Révolutionnaire, many of whom were suffering from small-pox, to Falmouth.

On the evening of 26 October the Artois arrived off St. Helens with her prize. Initial newspaper reports were sketchy regarding the appearance of the two frigates as a boat had not yet reached the shore, and although the Artois was correctly identified, her captain was named as Lord Charles Fitzgerald. Subsequent reports corrected this error, and they also provided the intriguing information that a good deal of wine and poultry had been discovered aboard the French frigate. Mr Oliver was promoted master and commander with seniority from the date of the action, and on 12 November Captain Nagle was honoured with a knighthood by the King.

Unfortunately, the Artois only saw three more years of active service before she was wrecked off La Rochelle on 31 July 1797 when still under the command of Captain Nagle. Her prize, the Révolutionnaire, enjoyed a far more glorious career, and in acquiring the nickname of ‘the Irish Racehorse’ she lived up to the consensus that she was one of the finest frigates afloat. Remaining in service until 1822, she made a considerable number of captures including French frigate Unité 36 in April 1796 when under the command of Captain Francis Cole. Sadly, her only French captain, the brave Captain Thévenard, lost his life when commanding the Aquilon 74 at the Battle of the Nile in 1798.