Captain Essington of the Aurora accused of Murder – 19 July 1794

As the French Revolutionary War intensified so the recruitment of men to crew the ever expanding British Navy became ever more onerous, and the measures that the individual captains took to man the fleet became ever more desperate.

Captain William Essington of the frigate Aurora 28 was one such commander. At about 4 p.m. on the afternoon of 19 July he had, what seemed to him, the good fortune to fall in with a homeward-bound whaler whilst cruising off St. Abb’s Head on the Berwickshire coast. She was the Sarah and Elizabeth, and was returning to Hull from fishing the Davis Strait. After firing a couple of warning shots Essington closed with the whaler and sent the sailing master, Mr Watson, and the boatswain, Mr Williamson, across in the Aurora’s small cutter to interview her crew and press those men who were not protected. The hardened whalers were not going to make life easy for these officers however, and in locking themselves below decks by battening down the hatches they made it clear that they would resort to force to prevent any of their shipmates being taken. 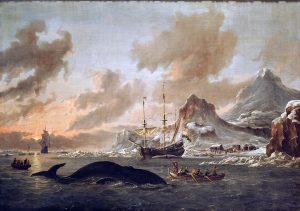 Unhappy at the time that Watson and Williamson were taking, Essington sent his second cutter across under a master’s mate to establish the reason for the delay, and this officer returned with the advice that the whalers had retreated between decks and taken to arms. A Lieutenant Seppings was ordered to man the barge and the second cutter with an armed boarding party, but by the time that these boats reached the Sarah and Elizabeth she was already in hail of the Aurora. Shouting across to the whaler’s master, Essington declared that as the latter had apparently lost authority over his men the Sarah and Elizabeth was obviously in a state of mutiny, and that the master and those men who were still loyal should come aboard the Aurora whilst the remainder would be brought to order by force. The master replied that if Essington was determined to take him he would have little option but to acquiesce.

Matters then took a turn for the worse when Essington was informed that one of the Aurora’s boarding party had been wounded. With his men in control of the Sarah and Elizabeth’s helm, Essington took the Aurora alongside the whaler at about 5 p.m. and opened a dialogue with the boatswain, Mr Williamson, who by now had a lighted match in one hand and a grenade in the other, and was seeking permission to drop the device into the whalers below. To this request Essington agreed, but fortunately Williamson was dissuaded from launching the grenade by the master of the whaler, who explained that such an act would set fire to the oil he was carrying below decks and blow everyone to Kingdom come. Thwarted in this design, the men of the Aurora set to the hatches with crowbars, but after prising them open the whalers still refused to come up on deck, and during the fracas that ensued Mr Williamson was shot and injured in the leg.

What happened next was the subject of contention, dependent on which side was to be believed. According to the whaler’s version of events a thoroughly exasperated Essington ordered his squad of eighteen marines to fire their muskets down the hatchways, and when the whalers cried out for quarter it was refused. According to Essington, his men instinctively responded to a volley of shots from the whalers without his authorisation to do so, and both he and those of his officers already aboard the Sarah and Elizabeth immediately ordered the marines to cease firing. Whatever the true account, the Aurora’s small arms fire killed the whaler’s carpenter’s mate, Edward Begg, and left three other men wounded.

Twenty-four members of the crew of the Sarah and Elizabeth who had taken to arms were removed to the Aurora and placed in irons where they remained for the next two weeks prior to being deposited at the Nore. The three wounded men were also brought aboard the frigate and given treatment. Meanwhile the master with fifteen men from the Aurora took the whaler into Hull on 23 July where the coroner, William Watson Bolton, examined the body of the dead man. The owners of the whaler instituted a prosecution against the captain and men of the Aurora, and in absentia Captain Essington and the members of his crew were tried before a jury and found guilty of wilful murder.

Essington wrote to the mayor of Hull on 22 July claiming that the whalers had been in a state of mutiny, and that they had opened fire on his men under the advice of the Sarah and Elizabeth’s master. Notwithstanding the sea officer’s assertion, a banker from Hull by the name of Robert Pease set off for London to lay the case and the jury’s verdict before the Admiralty. Anxious not to set a precedent, the naval lords decided to place Essington out of harm’s way, and in the spring of 1795 they dispatched him in the Sceptre 64 to St. Helena to collect a convoy. Thereafter he rose through the ranks, and in 1807 he served as a senior subordinate to Admiral Lord Gambier in the expedition against Copenhagen.

The affair was settled for good when in June 1810 it was announced that upon an application to the attorney-general by a Mr. William Bell of Hull, Essington would face trial at the forthcoming Admiralty Sessions for the alleged murder of Edward Begg, Providentially, apart from the captain’s original letter no other documents relating to the incident could be found, and so having no evidence on which to base a prosecution the case was dropped.