On 10 May, having recently collected a convoy of victualling ships from the Channel Islands for Newfoundland, the frigate Castor 32, Captain Thomas Troubridge, had the misfortune to fall in with Rear-Admiral Joseph Marie Nielly’s squadron of five sail of the line and four frigates. This force had left Rochefort on 6 May, and with the Brest fleet being instructed to distract Admiral Lord Howe’s Channel Fleet it had orders to see to safety a huge and desperately required homeward bound French convoy from America.

Resistance against such a superior force was futile, and so Troubridge surrendered the Castor to the French sail of the line Patriote 74 and the thirteen vessels of her convoy were taken by other ships from Nielly’s force. The Castor was then commissioned into the French Navy at sea by Nielly, and she was re-manned by a crew of some two hundred men culled from the other vessels of the squadron and placed under the command of a Captain L’Huillier.

Within the following week nine of the victuallers would be recovered some one hundred and fifty miles to the west of Brest by a squadron of six sail of the line and four frigates under the command of Rear-Admiral George Montagu, which had been detached by Lord Howe for that purpose. Although the Castor was seen standing towards Brest on the 16th she remained at large, but two weeks later, on 29 May, being some two hundred miles due north of Cape Finisterre, and having become detached from Nielly’s squadron to successfully chase the Dutch East Indiaman the Maria Gertruda, bound from Amsterdam to Batavia with iron and other cargo, she fell in with the Channel Fleet frigate Carysfort 28, Captain Francis Laforey. 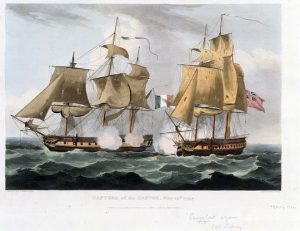 The recapture of the Castor by the Carysfort.

The Castor had been first commissioned into the British Navy during the Spanish Armament in 1790 by Captain John Samuel Smith, only to be paid off weeks later. She had then been re-commissioned in the early weeks of the French Revolutionary War in February 1793 by Captain Thomas Troubridge, the 35 year-old son of a humble baker who had hauled himself up to command a man-of-war by sheer determination, no little skill, and force of character. She had an armament of twenty-six 12-pounder cannons on her gun-deck and six-6-pounder cannons on her quarterdeck and forecastle, equating to a broadside weight of metal of one hundred and seventy-four pounds.

The Carysfort was an old frigate, having been first commissioned in 1767 and seen service throughout the American War of Independence and some years in the 1780’s. Her commander, Captain Francis Laforey, could not have been more different to Captain Troubridge, for as the son of Rear-Admiral Sir John Laforey, the commander-in-chief in the Leeward Islands, he had been promoted to commander on the back of his father’s interest in June 1791, and returning to England had been posted captain of the Carysfort in June 1793. His frigate’s armament was twenty-four 9-pounder cannon on her gun-deck, six 18-pounder carronades on her quarterdeck and forecastle, and four 6-pounder cannons on her quarterdeck, thereby also equating to a broadside weight of metal of one hundred and seventy-four pounds. She had aboard at this time a somewhat raw crew of one hundred and ninety-seven men.

Casting off the brig which temporarily made good an escape, the newly acquired French Castor attempted to put up a fight against the Carysfort, with both vessels battering each other at short range, but she soon lost her main topgallant mast to the superior gunnery of the British vessel. The action progressed for an hour and a quarter with both vessels sustaining damage to their sails and rigging, and with shot holes in their hulls, until with his mainmast severely damaged, and sixteen men killed and nine wounded, Captain l’Huillier was obliged to surrender. Two midshipmen, a master’s mate and eighteen British seamen from the Castor’s original crew were found to be still aboard the Castor, but the remainder with Captain Troubridge had previously been taken aboard Nielly’s flagship, the Sans Pareil 80. With her prize secured the Carysfort, which had lost one man killed and six wounded in the engagement, now made the best of her way to Plymouth.

There would subsequently be some dispute as to the validity of the Castor as a prize to the Carysfort, as since her original capture by Nielly’s squadron nineteen days earlier she had not entered a French port, and thus she could still be considered the property of the King and only liable to a claim for salvage. Unusually, the French captain, M. l’Huillier, was called to give evidence, and he was able to confirm that Rear-Admiral Nielly had been given the authority to condemn prizes and commission them for service without the necessity of sending them into port. This testimony convinced Sir James Marriot, the Judge of the High Court of the Admiralty, to rule in favour of Captain Laforey and his crew, and in addition to pocketing their respective shares of the prize money for the Castor they also received salvage for the Maria Gertruda, which they had retaken on the same day.

For his part in the action the Carysfort’s first lieutenant, Richard Worsley, was promoted commander, whilst another lieutenant, George Sayer, who would later reach flag-rank, was warmly praised.

Restored to British colours, the Castor continued in service until the end of the Napoleonic War before being sold out of the service in 1819. Her greatest moment of glory came in April 1809 when she participated in the capture of the French sail of the line Hautpoult 74 off Puerto Rico when under the command of Captain William Roberts. The Carysfort meanwhile finished her active service in September 1806 without gaining any further distinction.