Captain Hood and the Juno escape from Toulon – 11 January 1794

On 3 January the twelve-pounder frigate Juno 32, Captain Samuel Hood, left Malta having embarked one hundred and fifty supernumeraries made up of forty-six officers and marines from the Romney 50 and a group of Maltese sailors. Hood’s instructions were to deliver these men to his cousin, Vice-Admiral Lord Hood, whose Mediterranean fleet had been occupying the port of Toulon in co-operation with the French Royalists and the Spanish since the previous August.

Undoubtedly Captain Hood’s career had benefitted from his family association with the highly regarded Lord Hood and his brother Vice-Admiral Sir Alexander Hood, the future Viscount Bridport, yet if nepotism had been an influence in his posting to captain at the age of 25 in 1788, a year in which less than half-a-dozen officers had received that step, then it had not been to the detriment of the service, for the younger Hood, despite cutting a somewhat gangly, unprepossessing, simple and unsophisticated manner, was a first-rate officer who would enjoy an outstanding career in the years to come. 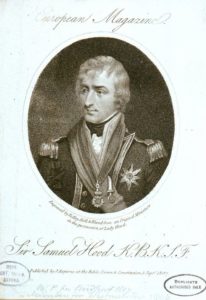 On the night of 7 January the Juno passed the south-west point of Sardinia, and by the late morning of the 9th was off Cape Sicie, to the south-west of Toulon. Over the next two days she was driven off to leeward several times by adverse winds and currents, and it was not until the evening of the 11th that she was able to work to windward and open up Toulon. Anxious not to risk being thrown to leeward once more, Hood decided to proceed into port that night rather than wait for morning, and by 10 pm the Juno was abreast of Cape Sepet at the entrance to the outer harbour, and the hands were being called up on deck to bring the frigate to anchor. Hood did not have the benefit of a pilot, so instead he placed two midshipmen with night-glasses and instructions to identify the anchorage of the British fleet, yet hard as they peered through the drizzle and gloom, not a ship was discovered during their passage through the outer harbour. Hood could only therefore surmise that the shipping had retreated into the inner harbour to escape the earlier easterly gales.

When the Juno entered the inner harbour under topsails only a vessel was at last spotted, and soon the frigate’s officers were able to pick out other lights which they imagined to be the fleet. Up ahead a brig loomed through the murk, and realising that he could not weather her Hood gave orders that the foresail and driver should be set once they had eased past her in order that he could then tack. At this point an indistinct hail arose from the brig which, the language being imperceptible, was taken to be ‘What ship ’ Upon answering ‘The English frigate Juno’, a reply ‘Viva!’ was given. Hood then tried without success to enquire in both French and English what brig she was, and where the British Admiral lay, but no response was forthcoming until the moment that the Juno passed under the brig’s stern, whereupon a curious instructed to ‘Luff! luff!’ was heard. Supposing that his frigate was approaching shoal water, Hood ordered the helm a lee and immediately the frigate grounded.

Thinking fast, Hood ordered the sails clewed up, and whilst his men rushed aloft to complete this task a boat was seen to leave the brig and head for the town. Before his men had even descended from the yards the frigate began making sternway under a sudden gust of wind that blew down from the mountains, and Hood ordered the driver and mizzen stay-sail to be hoisted in the hope that more sternway would carry the frigate further away from the shoal. Unfortunately however, as soon as the Juno lost way she swung around head to the wind and her keel grounded so firmly on the shoal that her rudder became immobile. The launch and cutter were hoisted over the side and manned in an attempt to warp her off, and in the midst of this hustle and bustle a number of French officers came aboard and instructed Hood to move his command into an anchorage in the inner harbour, in order to comply with the quarantine regulations.

Up until this time Hood and his men had considered nothing amiss, but providentially one of his midshipman noticed that the French officers had foolishly left the distinctive tricolour cockades in their hats, and that far from being the royalists they intimated themselves to be, were actually republicans. Upon closer inspection with the aid of a shaft of moonlight Hood confirmed the midshipman’s detection, and with it dawned the vulnerability of his situation. Realising that they had been discovered, the French revealed their true identities and ordered Hood to keep his men calm in order to prevent any unnecessary bloodshed, adding that they could expect to be treated well if they succumbed. The capture of the Juno seemed a foregone certainty.

Happily at that moment a wind sprung up, and the third lieutenant, William Henry Webley, advised Hood that he considered the ship could haul off the shoal under sail. Comprehending this interjection, the French officers un-shipped their cutlasses but were easily overpowered and led below by the marines wielding their half-pikes. The Maltese sailors were also ordered below, and the crew of the Juno raced so speedily to their quarters that within three minutes all the sails were set and the taut cable was cut. Then just as Mr Webley had predicted another gust of wind blew the Juno off the shoal, and with all the boats including the French craft being cut loose she began to make headway.

Thereafter Hood was able to effect his escape from the outer harbour despite the French brig and batteries opening fire, being assisted to a great degree by the rain and the darkness which had caused him to make the potentially fatal error in the first place. The frigate did receive a couple of 36-pound round shot in her hull, and although she fired little in reply one salvo did hit a French battery. Somewhat fortuitously she was just able to weather Cape Sepet, and by 12.30 she was out of harm, having suffered not one casualty in the whole affair. Without incurring any furthers mishap the Juno eventually rejoined Lord Hood’s fleet in Hyères Bay on 13 January.