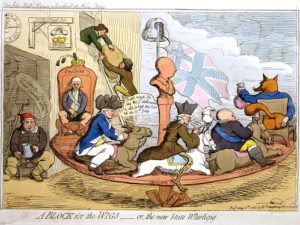 On 20 January Britain, France and Spain ceased hostilities, although the war between Britain and the Netherlands continued , whilst that with the Americans only formally ended on 3 September. As a result of the ensuing peace treaty Britain retained Canada, all of the West Indian islands they had held prior to the war, Gibraltar, and all of her possessions in India. Otherwise Tobago, Gor e and Senegal were ceded to France, St. Lucia was returned, Florida and Minorca reverted to Spanish control, and all the territories east of the Mississippi were subsumed by the new United States of America. At Westminster power passed briefly from Lord Shelburne s government in April to an unlikely coalition led by Charles James Fox and Lord Frederick North, before in December an administration was formed by the twenty-four year-old William Pitt, the son of the late Earl of Chatham.

With news of the armistice not reaching the East Indies until July Vice-Admiral Sir Edward Hughes and Vice-Admiral Pierre Andr de Suffren met for the fifth and final time at the Battle of Cuddalore on 20 June, with the French earning a moral victory in so much that the British fleet was obliged to withdraw from the siege of that town. Hughes had in fact been due to return home through ill-health but his successor, Vice-Admiral Sir Hyde Parker, failed to arrive when his new flagship, the Cato 50, disappeared after entering the Indian Ocean during January.

Elsewhere the French frigate Sibylle fought off an attack by the Magicienne on 2 January whilst preserving her convoy in the process, but in a disabled state she was then captured by the sloop Hussar 20 on 22 January, which engagement became notorious for the alleged un-chivalrous behaviour of the French captain. On 19 January the Leander 50 fought a gallant action with a larger unknown opponent which her officers believed to be Spanish, but might well have been French.

At Portsmouth a mutiny erupted in March aboard the Janus 44, and disaffection was displayed by other vessels as a result of the length of time it was taking to decommission the men-of-war and pay off the homesick crews. Back at Westminster the trial was held in June of a marine officer who had formed a grudge against Captain Sir James Wallace when they had served aboard the Warrior, and who had physically attacked Wallace outside the Admiralty.