Following the change of government in April 1782 many of the admirals who had refused to serve under the previous administration had returned to duty, and amongst them was the 67 year-old hereditary baronet Vice-Admiral Sir Hyde Parker.

Sir Hyde was a crusty bad-tempered but efficient officer of long experience who had as recently as July 1781 fought the ferocious but inconclusive Battle of the Doggersbank with the Dutch fleet. Hailed as a hero, he had then blotted his copybook by damning the Admiralty for providing him with inferior ships, had treated the King with scant regard when His Majesty had visited the fleet, and had refused the honour of a knighthood. Only with the insertion of the new government had Parker consented to return to employment, and he had been duly asked to replace the sickly Vice-Admiral Sir Edward Hughes as the commander-in-chief in the East Indies. 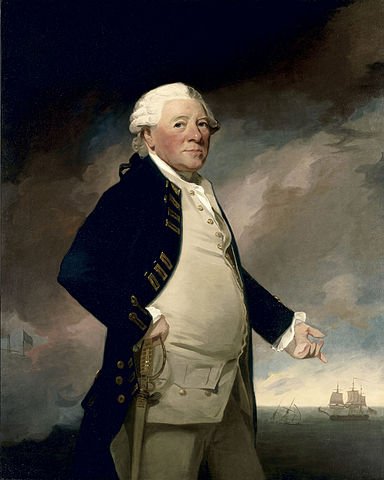 Parker s flagship was to be the Cato, a brand new 50-gun ship which had been launched at Woolwich in May. She had been placed under the command of James Clark, an officer who was duly posted captain in July, and who probably had some connection with the Parker family given that his early service had been with Sir Hyde s son.

After much delay the Cato eventually sailed from Portsmouth during mid-October in the company of the sloop Hound 14, Commander Thomas White. By the 27th the two vessels were at Madeira from whence they departed on 1 November, their anchorage being filled later that day by Rear-Admiral Sir Richard Hughes Leeward Islands bound squadron of eight sail of the line.

On their voyage down the Atlantic the Cato and Hound suffered a good deal of bad weather and were obliged to make for Rio de Janeiro to effect repairs. They then sailed from that port on 12 December, and when on Boxing Day two ships were seen to the south of St. Helena by a Portuguese ship, the Sacre Sacremento, these were surmised to be the Cato and the Hound. In October 1783 British newspapers were reporting French correspondence to the effect that the Hound had arrived at Bombay on 16 April, and that the Cato had come in four days later. The same information was included in letters received by the French in January 1784, but other reports emanating from Madras suggested that the Cato had parted from the Hound off the Cape and it was surmised that she had returned to Rio de Janeiro for repairs.

But when the frigate Medea 28, Captain Erasmus Gower, arrived back in England from India with Vice-Admiral Sir Edward Hughes despatches in January 1784 it was with the desperate tidings that the Cato had never reached India. By May it was generally accepted that Parker s flagship had been lost, and in September the authorities conceded as much when Captain Clark s will went to probate.

The fate of the Cato was never established. Various reports suggested that she had struck a rock and foundered, that she had sunk near the Maldives, or that she had overset in a squall to the south of Madagascar. Another report stated that she had caught fire and blown up near the Laccadive Islands off the south-west coast of India, this version being based on the claim that the crew of a country ship sailing between Tellicherry and the islands had seen a large ship afire on the horizon at about the time the Cato was expected in those waters.

In 1791 a further account surfaced to the effect that a Captain Burn in the service of the Nawab of Arcot, a British ally in India, had been delivering pilgrims to Mecca when he had seen a boat belonging to a Malay vessel that was being baled out by what appeared to be a British-made bucket. Upon closer inspection he had seen the name Cato inscribed on the bucket, and on enquiring how the Malay had come by it he had been told that a large foreign vessel had been wrecked on the Malabar Coast in south-west India some years previously, and that most of her crew had been slaughtered by the natives. Burn then apparently went aboard the Malay vessel and found that she was almost entirely furnished with the Cato s stores.

Whether or not Captain Burn s tale was true the newspapers soon suggested that the wrecked ship might have in fact been a French vessel by the name of the Caton . In any event, their previous suggestions that a vessel be sent to the Malabar Coast to ascertain the fate of the Cato, and if so to contact any fortunate survivors, were never acceded to by the Admiralty.