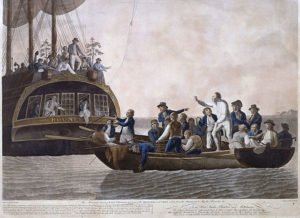 The year of 1789 was notorious for the mutiny on the Bounty.

The year of 1789 would become one of the most infamous in the history of the Navy when elements of the crew of the Bounty, which had been sent to collect breadfruit plants from Tahiti, mutinied against their commander, Lieutenant William Bligh on 28 April. Following an epic open boat voyage Bligh and those loyal crew members who had been thrown off the Bounty managed to reach safety, but a more uncertain fate awaited those men who had remained behind with the chief mutineer, Fletcher Christian. Whilst stopping off at the Cape on their passage back to England several loyalists from the Bounty met Lieutenant Edward Riou, who in a similar display of outstanding seamanship had brought his severely damaged command, the Guardian, into the Dutch colony after she had struck an iceberg on 24 December whilst bound for New South Wales.

During February a small squadron under the command of Commodore Hon. William Cornwallis set out for India where that officer s brother, the Earl Cornwallis, was the governor and commander-in-chief. The expeditionary force was notable for the number of promising young officers it carried with it, but apart from supporting the army and the East India Company in a local war with Tippoo Sahib it otherwise enjoyed little activity.

In civic matters King George celebrated his return to good health by holding a naval review at Plymouth on 18 August, whilst Lieutenant Christopher Nesham displayed such valour in confronting a mob in a French village in October 1789 that he found himself summoned to Paris to attend a ceremony in his honour.