Whenever the two countries were not at war it was often the case that British naval officers spent time living or studying in France, and at various periods in their lives admirals such as St. Vincent, Nelson, Barrington, Rodney and Smith had done so. One far less famous naval officer to make the short trip across the Channel was Christopher Nesham, the son of an army officer, who at eighteen years old had not even obtained the rank of lieutenant when he enrolled as a student at Vernon-Sur-Seine in Normandy.

By 1789, within a year of Nesham’s arrival, France was a country in turmoil, and whilst a great revolution raged in Paris there was no less an agitation amongst the populace in the provinces. With the established order breaking down supply lines soon became disrupted, resulting in shortages of essentials. In Vernon this meant bread, and when it was discovered that the wealthy superintendent of the local corn depot, 56-year-old Jean-Michel Planter, had been sending flour to Paris, he was accused by the outraged villagers of neglecting his own people. 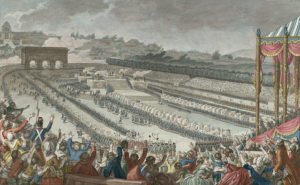 Paris celebrates the first anniversary of the French Revolution in 1790, the same year that Nesham was rewarded by the City for his great act of bravery

By 25 October the villagers’ attitude towards Planter had descended into outright hostility, and even though he had previously shown great charity to the poor they determined to bring him to account. Two days later a mob, emboldened by the news that the commander of the Vernon National Guard had been taken prisoner by the inhabitants of the nearby village of La Roche-Guyon, attacked Planter’s mill and carried him away to the Town Hall. Here he sought refuge with his advocate, but the mob broke in and dragged him down the steps to a lamppost at the corner of the building and began making preparations to string him up.

As soon as he saw a rope appear young Nesham thrust his way through the agitated throng to place himself alongside Vernon’s barrister and an elderly priest who were desperately pleading for Planter’s life. Boldly, he is said to have declared ‘I am unarmed, but I shield with my body the honest man whose life you want to take away. Begin then by taking mine’. The three men then stationed themselves around the merchant and sought to fend off the rabid blows of the mob. The rope that had been placed around Planter’s neck was severed by a slashing sword. Nesham grabbed a pistol from an assailant and used it to repulse the blows of others. At one point he was knocked to the ground, but he was soon on his feet again and warding off more attacks. Finally, and with the assistance of the two brave Frenchmen, he managed to tear Planter away from the mob, pull him down a side street, and thrust him through a door which was swiftly secured. Apparently moved by the Englishman’s heroism the mob’s anger quickly dissipated, and whilst the young midshipman was lauded as a brave fellow the beleaguered M. Planter was spirited away to safety at Rouen.

Nesham’s gallantry became the talk of Vernon, and after order was fully restored following the arrival of an armed battalion, he was granted honorary citizenship of the town on 14 November. Yet when word of the disturbances reached Paris, he found himself bestowed with an even greater honour. On 13 January 1790 a deputation from Vernon including Nesham attended the Assembly of the Representatives of the Commons of Paris, and his bravery in saving the life of M. Planter was conveyed to the members. It was immediately proposed that Nesham should be honoured in accordance with a practice of ancient Rome, which saw a civic crown placed upon the head of one who had saved the life of a citizen. Additionally, it was moved that a uniform sword of the National Guard of Paris should be awarded to Nesham, for ‘he who unarmed had exposed his life to save that of M. Planter, would always make a noble use of that sword to defend liberty, and repress anarchy and confusion.’ A member then recommended that an inscription on the guard should read ‘The Commons of Paris to C.J.W. Nesham, an Englishman, for saving the life of a Frenchman, 1790.’

Two days later the president of the assembly announced that the crown and the sword were ready for presentation, and when Nesham came before the members he was told ‘Young Stranger, you have merited much from the capital of the French empire, in saving, at the peril of your life, a citizen who is dear to it. The Assembly of the Representatives of the Commons of Paris owe you their gratitude, and they are going to acquit themselves of it to you’. The crown was then placed on his head, and the sword presented to him by the president with the declaration that it ‘will be the instrument of your courage. Your parents will not be able to read, without emotion, the inscription of the generous action for which you merited it’.

Despite this effusive acclamation Mr. Nesham had seen enough of France however, and by June 1790 he had returned home and secured himself a position aboard the Salisbury 50, flagship of Vice-Admiral Mark Milbanke and captained by the excellent Edward Pellew. In November he was promoted to lieutenant, and having been posted captain in the general promotion of April 1802 he eventually found himself awarded flag rank on the retired list some fifty years after his curious act of heroism in Vernon-Sur-Seine.