Few officers were more active in the American Revolutionary War than Captain Sir James Wallace, who whilst commanding the Experiment 50 did not have to go seeking action – it normally found him. So it was that whilst cruising in Boston Bay about thirty miles north of Cape Cod on 25 September in company with the sloop Unicorn 20, Captain John Ford, a large unknown ship with two smaller consorts obliging appeared in the north-west at about midday. This vessel would prove to be the rebel frigate Raleigh 32, Captain John Barry, to which the two British vessels immediately gave chase.

The Experiment had been in commission for three years in North American waters and had been blooded at the attack on Charleston in June 1776, following which Captain Wallace had joined her in an exchange with the injured Captain Alexander Scott. Her consort, the Unicorn, was just a couple of years old and had also spent her entire commission on the North American station under the command of Captain Ford. 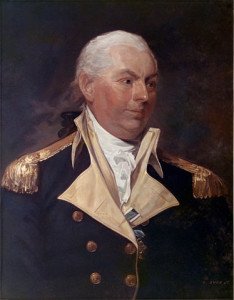 The Raleigh had first put to sea in 1777 when she had ventured across the Atlantic Ocean in company with the Alfred 30 to attack British shipping. On 3 September 1777 she had fallen in with a convoy off the Scilly Isles under escort of the sloop Druid, whose Commander Peter Carteret had been mortally wounded in successfully defending his charges. After replenishing in France the Raleigh and Alfred had made for the Leeward Islands where the latter had been captured. Upon returning to Boston the Raleigh s captain, Thomas Thompson, had been suspended for dereliction of duty in not supporting the Alfred and Captain Barry had been appointed in his stead. Now he had set sail from Boston on the morning of 25 September, a mere six hours before being discovered by Captain Wallace.

Clearly hoping to take advantage of the gloomy weather, and displaying fairly impressive sailing qualities, the rebel frigate changed course towards the north upon being sighted and detached the two smaller vessels in her company. Throughout the day Captain Wallace maintained his pursuit, but although the Unicorn was able to make use of her bow-chasers the British made little impact in closing the gap between them and their prey. The next day saw the pursuers fall even further behind, and by late afternoon the chase was no longer in sight. However, one of the American s consorts, a brig, was captured and from her Captain Wallace discovered the identity of the frigate. This information stiffened his resolve to make a prize of her.

Come the clearer morning of the 27th the two British ships initially found themselves alone on the ocean, but at about 9 o clock the rebel appeared in sight again, having apparently altered course in the night towards the south-east. As they were sailing on a south-westerly course and enjoying the benefit of the weather-gauge it was clear that Wallace and Ford would be able to cut the Raleigh off, so it was no surprise when the rebel put his ship about and assumed a northerly course towards the coast of Maine. Throughout the morning the Raleigh enjoyed a westerly breeze that allowed her to pull away from the pursuers, but as she began to close the island-strewn shore she increasingly lost the benefit of the wind, and it dropped to a calm in the afternoon. The Unicorn, outstripping her larger consort, was able to reap the benefit of the lingering wind out to sea, and she rapidly closed in on the enemy.

At about 5 pm, as the sun began to set, Captain Ford got within range. He knew full well that his chances of defeating the Raleigh were slim, but if he were able to inflict enough damage then it would slow the rebel sufficiently for the Experiment to come up and enforce her surrender. He also knew that the Raleigh would endeavour to hit him with everything she had in the hope of disabling the Unicorn and facilitating a clear run away from the Experiment. Clearly the American captain was of a similar mind, for at that moment he hoisted his colours, hauled up the mizzen sail and took in the courses in order to bring the Unicorn to action. A broadside swiftly followed to which the Unicorn responded at about 6.15. Taking advantage of his sloop s manoeuvrability, Ford then tacked the Unicorn, shot up on his opponent s lee quarter and gave her another broadside which fatefully knocked over the heavier American s foretopmast and mizzen top-gallant-mast. As the rebels struggled to clear away the debris Ford poured in more fire, inflicting many casualties. The Raleigh then tried to lay herself alongside the Unicorn but Ford was having none of that, and he sheered off. His move did not prevent the larger American from hitting him with everything she had, and soon the Unicorn was suffering a great deal of damage below and aloft as the two ships drifted away, guns blazing, to the north. Only at about 9.30 did the guns fall silent and they remained so for thirty minutes whilst Captain Ford sent up flares to apprise Wallace of his position.

The Unicorn s sacrifice had been worthwhile, for in the gloom Wallace was gradually making up the three mile leeway with every probability of getting the Experiment into the action. Having been in a contest for upwards of five hours Ford was not going to risk losing their prize however, and the mutual action recommenced and continued up until 11 p.m. when the Unicorn hove too in order to speak with the approaching Experiment. Together the two ships then attempted to prevent the Raleigh getting inshore, but after sustaining three massive broadsides from the Experiment and the continued annoyance from the sloop the Raleigh began to pull away again, her stern-most guns still spitting defiance.

A panorama of Penobscot Bay by Centpacrr at English Wikipedia, CC BY-SA 3.0,

What the British captains did not know was that these island-strewn waters were totally unfamiliar to Captain Barry and his scratch crew. He had brought his frigate inshore with the hope of finding a safe harbour, but now being heavily-outgunned and disabled he resolved to beach his command and set her alight rather than be captured by the British. Setting his ship at the centre of a cluster of islands ahead, he drove aground on what was later assumed to be Wooden Ball Island in the Penobscot Islands.

Still the action continued however, with the American gunners responding to two further broadsides from the Experiment with their own, and when Wallace s command suddenly hung in her stays whilst endeavouring to join her enemy aground she was subjected to a ferocious raking fire by Barry s stranded frigate. Even so the Experiment was then able to rake the American in turn before both British vessels posted themselves on the Raleigh s quarters and poured in more fire. Finally the gunfire ceased as Wallace, being wary of prosecuting his attack amongst the rocks in the dark, anchored his ships a mile away from their opponent to await the light of the morning. During the action the Americans had suffered twenty-five casualties, the Unicorn ten men killed and many more wounded.

At 7 a.m. the next morning the Experiment and Unicorn moved within range of the stranded Raleigh, fired a number of guns, and hoisting their boats over the side with heavily armed men sent a flag of truce ahead to offer the rebels quarter . In response the American colours were struck and the rebels still on the island numbering about one hundred and thirty were taken prisoner. Captain Barry however was not amongst them, for in the small hours he had personally began ferrying men to the mainland with the intention of getting his whole crew ashore. What he had not known was that the islands were in fact some twenty miles from the mainland, and he did not have enough time to return and rescue the bulk of his crew. Even worse for the redoubtable Barry was the fact that the sailing master and a midshipman who had been detailed with two dozen men to set the Raleigh alight had failed in their task, and even more despicably in his mind had allowed the colours to be struck.

Throughout the rest of the morning Wallace set about re-floating the Raleigh, which was easily accomplished by 3 p.m, and she was later bought into the navy although her time in commission was brief. For Captain Barry, who reached Boston two weeks later with about eighty-five of his crew, their followed an honourable acquittal at the inquiry into the loss of his ship. For the busy Wallace however, the affair probably failed to merit an entry in his personal diary.