Operating out of Port Mahon on the island of Minorca, the sloop Porcupine 24, Captain Sir Charles Henry Knowles, had already made one, albeit fruitless, cruise in company with the sloop Minorca 18, Commander Hugh Lawson, when she was ordered to undertake another off the coast of Spain. However, on his way to rendezvous with his consort off Cape de Gatte, and having been delayed by the fitting of twenty sweeps to his command, Knowles learned from a Dutchman off Valencia that two 44-gun Spanish frigates and four xebecs were about to sail from Cartagena to Majorca. His attempts to make haste and warn Captain Lawson were negated by adverse winds and current, and at 4 a.m. on 22 July the Porcupine fell in with two of the xebecs some ten miles off the Colobres Rocks.

Realising the superiority of the enemy, Knowles firstly attempted to run eastwards, but the xebecs were easily able to out-sail him and by 6 a.m. were within gun-shot on his weather quarter and running up their colours. Unhesitatingly the Spanish attacked, with one crossing the Porcupine s bow in an attempt to rake her fore and aft. Knowles determined to seize the initiative, and turning before the wind he began pouring broadsides into both his antagonists before closing on the larger of the two xebecs which was to larboard and boasted twenty-six or twenty-eight 9-pounders. His fire drove her off at about 7.20. The second xebec, carrying twenty-two or twenty-four 9-pounders, had evidently been intending to run down from her position to windward and board the Porcupine, but superior seamanship from Knowles saw this Spaniard taken aback, and she withdrew to rejoin her compatriot. 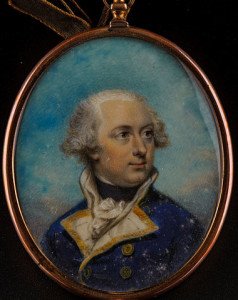 Shortly afterwards a third xebec appeared in sight, and bolstered by this reinforcement the Spanish renewed the chase of the Porcupine. From 9 a.m. they were engaging her at long distance with their bow-chasers, to which the British sloop responded with her stern-chasers. Knowles evaded the first xebec by reducing sail at about 10.15 and letting her fly by, and he then wore around to engage the second xebec, which had shortened sail. After receiving a battering from the British cannon the xebec set her courses and fled at about 11.30. The third xebec paused only to exchange a fleeting shot, and after shadowing the Porcupine for a further two and a half hours the Spanish stood off, thereby allowing Knowles to bear away for Port Mahon in safety, and having suffered four men wounded.

The day after the Porcupine reached Minorca news of the sighting of a French convoy off Majorca escorted by a lone frigate was received. Despite the absence of sixty of his men in the boats collecting fresh water, Knowles set sail at once in company with the Minorca and two small privateers. He was however unable to persuade three larger privateers to join his force, as their captains claimed that their vessels would not be ready to sail for another three weeks.

At about 5 a.m. on the morning of 30 July, the squadron came up with the French off Cape Caxine on the Barbary Coast to the west of the port of Algiers. The convoy consisted of seven tartans and the Montr al 32, a British-built frigate that had been launched in 1761, and which had seen regular service up until the time she had been captured in the Straits of Gibraltar under the command of Captain Stair Douglas on 1 May 1779 by the French 74 s Bourgogne and Victoire. She was now commanded by Captain de Vialis de Fontbelle.

When first discovered by the French convoy the Porcupine was just three miles away, with the Minorca a further five miles astern. Knowing that the local dey, Baba Mohammed ben-Osman, was neutral, if not indeed somewhat biased towards France, Captain de Fontbelle immediately ordered his charges to flee beneath the guns of a tower in Marabout Bay to the west of Algiers. Disregarding the question of the legality of launching an attack on the basis that a French frigate had recently violated the same neutrality laws in capturing two British vessels off Algiers, Knowles followed the convoy into the bay and his cannon fire quickly forced the surrender of four of the tartans. Taking possession of them was out of the question whilst the frigate was still on hand, and the privateers showed no inclination to accept this task, so it was to the Montr al that Knowles now directed his attention, although wisely he waited until his consort joined him.

At 6.45 the two sloops began engaging the Montr al in the bay, the Minorca doing so from long distance whilst the Porcupine reserved her fire until she was considerably closer. Unfortunately there was not the room in the bay for the sloops to manoeuvre inshore and assume positions off the Frenchman s quarters as the two captains would have desired, and when the Porcupine did succeed in manoeuvring across the Montr al s bows she masked her enemy from the cannon of the Minorca, obliging her to cease fire. The French resistance was momentarily stifled by the raking fire, but with the Porcupine being obliged to wear ship to avoid driving ashore Knowles found his own command subjected to three raking broadsides from the Montr al. Although he did manage to effect a final attack on the Frenchman s stern as his command came onto the larboard tack Knowles was unable to sustain the action, and the tricky conditions inshore resulted in both British sloops being forced out of the bay. 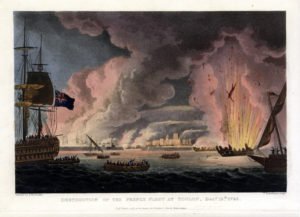 By the end of the one hundred-minute action Knowles had been wounded by falling rigging, he had only three broadsides worth of powder left, there was four feet of water in the hull, and the eight shot-holes below the waterline were letting more in. Even if the Porcupine had been able to fight on it would not have been possible for the two sloops to re-engage the French frigate as there was insufficient wind in the inner bay, nor clearly the room for them to support each other in any attack. Knowles also considered that further action would activate the Algerian neutrality, with the result that any captures would have to be forfeited.

After leaving the engagement with the Montr al, the Minorca joined the two small privateers in chasing off to the west in pursuit of the remaining three members of the convoy, which vessels were by now some four miles to leeward. However, whilst the Porcupine was working out to sea with the intention of returning post-haste for repairs to Port Mahon she discovered three large vessels in chase of her, so making the signal of recall to the Minorca Captain Knowles prepared to face yet another enemy. Fortunately the strange sail were none other than the three larger privateers that had apparently been un-ready for sea at Port Mahon, but had since been sent by the governor of the island to assist Knowles. The privateers also had aboard the sixty men that the Porcupine had left behind on the island, and their return proved most providential given the shattered state of the sloop.

Having survived the original attack by the Porcupine, Minorca and two small privateers, the French convoy had re-gathered around the Montr al and then sailed out of Marabout Bay. The three larger privateers endeavoured to give chase but by 11.00 the convoy had managed to elude the pursuit and it entered Algiers safely with no vessels having been captured.

During the action the Minorca lost two men killed, whilst the Porcupine suffered five men killed and two wounded. Aboard the Montr al three seamen were killed, whilst Captain de Fontbelle had been wounded in the right arm and then in his calf, and his injuries proved to be fatal. He had been succeeded during the engagement by the Comte de la Porte Yssertieux, and such was the meritorious conduct of this officer in securing the safety of the convoy that he was promoted to the rank of brevet captain. Meanwhile, after returning to Port Mahon Captain Knowles was found to be in little better shape than his sloop, and after falling ill through sheer exhaustion he was hospitalised for a month.

The Montreal survived in French hands until 1793, when at the end of the siege of Toulon she was blown up by the evacuating Spanish and British forces. The Porcupine remained in active service until 1802 without ever earning as much distinction as she did in her action with the Montr al, whilst the Minorca was scuttled at the entrance of Port Mahon harbour in August 1781 to thwart any intended French incursions into that harbour.