George Collier and the Shipwreck of the Winterton – 22 August 1792

For many sea-officers lacking interest and patronage the opportunities for employment in the navy during times of peace could be scarce indeed, and it was not unusual for these less fortunate men to either seek employment in the merchant marine in order to earn a living, or to sail for a foreign station where death and disease might provide a vacant berth on a naval vessel.

One such officer who took the decision to try his luck on a foreign station was 17 year-old George Ralph Collier, who had passed his lieutenant s examination but never received a commission, not least because he had failed to serve the requisite sea time of six years, although that would not have been a problem for a more well-connected youth. When in 1791 he was discharged from the frigate Juno 32, Captain Sam Hood, there seemed little likelihood of the navy being called to arms in the foreseeable future, and so Collier decided to take passage aboard the East India Company ship Winterton for the East Indies. The decision would have fateful consequences. 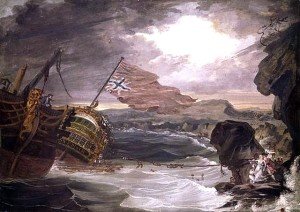 The wreck of the Winterton in many ways replicated the wreck of the Grosvenor in the same waters ten years earlier – but happily far more people survived to tell the tale.

In the last week of February 1792 the Winterton s captain designate, George Dundas, attended India House, London, where he was sworn in to his position, and on 18 April he took leave of the Court of Directors to commence his voyage to Bengal. The 40 year-old Dundas was a Scotsman who was a distant relative of the eminent politician Henry Dundas, and whose family originated from Linlithgow, situated about twenty miles west of Edinburgh. A veteran of several voyages to India and China, he was married to the daughter of a baronet, and was the father of three daughters with another child on the way. His ship, the Winterton, was regarded as something of an unlucky vessel, for on her first voyage she had sprung a leak, on her second she had nearly foundered within sight of port, and on her third she had lost fifty men to sickness. It was on this, her final voyage that her luck would run out.

Some four months into her voyage the Winterton entered the Indian Ocean, and it was whilst she was passing through the Mozambique Channel at 2 a.m. on 20 August that she struck a rock-strewn reef some seven miles off the western shore of Madagascar. The guns were thrown over the side and part of the cargo was jettisoned, but within a couple of hours Captain Dundas had to take the unenviable decision to cut away her masts. At daybreak her yawl was despatched inshore to solicit assistance, but any hopes of Dundas using her other boats were lost that evening when the long boat, cutter and jolly boat were smashed to smithereens by the sea breaking over the ship. On the 21st the yawl returned to the wreck, but conscious that the heaving sea might thrust her into the stranded Winterton Dundas ordered her back to shore.

That night the situation deteriorated to such an extent that the ship began to break up, and at 6 a.m. on 22 August Captain Dundas ushered some sixty-odd people including all the female passengers on to the safety of the poop deck with what provisions he could muster. The rest of the men were ordered to take their place in the mizzen-chains, and it would later be reported that the ultimate sacrifice was made as Dundas ordered the poop deck to be cut away. Three hours later the ship broke up into four pieces, and as the buoyant poop deck drifted slowly ashore the starboard side of the ship rolled over and the body of Captain Dundas was seen to float out of the quarter galley. Some forty other passengers and crew also met their death as the ship broke up, including the first mate and three young women.

Despite this loss about two hundred and fifty survivors including George Collier made the shore, be it on the flotsam of the Winterton, or by being scooped up into native canoes which had come out to see what was salvageable from the wreck. The last survivor made it ashore four days after the ship had gone aground, by which time what remained of the cargo, and indeed some of the personal possession of the Europeans, had been appropriated by the natives. Fortunately a more hospitable reception awaited the survivors when they reached Tulliar, the modern-day Toliara, and here they were treated kindly by the local ruler, the King of Baba. 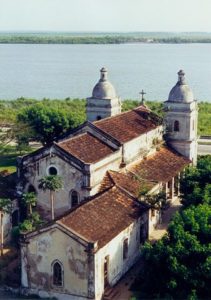 A view of Quilmane, where John Dale embarked for the Island of Mozambique to seek rescue for the castaways on Madagascar.

In the meantime the yawl had also come into the Tulliar River where an armed guard and the authority of the King of Baba dissuaded the natives from setting her alight so as to obtain her coveted ironwork. The carpenter and others soon set about strengthening the yawl so that it could undertake the hazardous seven hundred mile voyage to seek help from the principal Portuguese settlement on that coast of Africa, which was on the Island of Mozambique off the modern-day country of that name. Setting sail on 12 September, the party of seven men led by the third mate, John Dale, were unable to make a great deal of headway, and it was only with great difficulty that they eventually reached the smaller Portuguese settlement of Sofala seventeen days later, being still some five hundred miles south of Mozambique Island. Here, at first, they were well received, and they managed to obtain a larger vessel which put to sea on 12 October with the intention of heading south for Delegoa Bay, the modern day Maputo Bay, from where they might pick up a ship for the Cape. But eight days later the un-seaworthy condition of the boat forced them back to Sofala where their reception could not have been more different. No boat was made available, no assistance was offered, and they were given little option but to attempt the journey to Mozambique Island once more, although this time on foot.

Leaving Sofala on 1 November, the men soon found themselves alone in desolate and baking hot lands that were virtually uninhabited through the fear of its previous populace that they might be taken into slavery. Wary of marauding wildlife at night, and confined to walking through the heat of the day, fatigue began to overcome the party, and although by 20 November they had covered two hundred miles it was clear that they would be unable to travel much further. Fortunately the Portuguese governor at nearby Sena, learned of their predicament and sent out help, but even so, following their arrival at that place on 6 December three of the party died. Eventually Dale and a Portuguese-speaking passenger by the name of de Souza embarked on a sloop at nearby Kelim n, the present day Quelimane, and on 12 February 1793 they finally reached the island of Mozambique, some five months since leaving Collier and the others at Madagascar. Here Mr de Souza took the opportunity to embark on a French vessel for Isle de France, the modern-day Mauritius, whilst with the assistance of the Portuguese governor and a promise of payment from the East India Company Dale was able to contract a vessel to sail for Madagascar. This left Mozambique Island on 1 March and anchored near Tulliar in the Bay of Saint-Augustine just over three weeks later.

By now the original two hundred and fifty-odd survivors of the shipwreck marooned on Madagascar had been decimated by disease and illness, not only because they lacked medication and the resilience of the natives, but also because they had suffered from a constant state of anxiety and depression at their situation. The embarkation of the remaining one hundred and thirty-odd passengers and crew, including Collier, took the best part of ten days, and even after the vessel left Madagascar on 3 April another seven died before she reached Mozambique a week later. Here, although the Portuguese governor went out of his way to hospitalise the sick, the climate was no more conducive to good heath for the Europeans than it had been on Madagascar and within another two months thirty more people had died.

At length another Portuguese vessel was charted to carry the remnants of the Winterton s passengers and crew to Madras, and after setting sail on 10 June it seemed at last that their troubles would be over. Yet what Collier and his companions did not know, having been exiled from civilisation for so long, was that war had broken out between Britain and France, and thus when a ship hove into view on 7 July about a thousand miles to the south-west of the coast of India they were not overly concerned. It so happened that the vessel was the French privateer Mutin which was on a cruise from the Isle de France, and she had little difficulty in effecting the capture of the chartered Portuguese ship. Twenty-five men were taken aboard the privateer, which continued on her cruise only to be captured herself shortly afterwards by a Dutch Indiaman in the Tuticorin Roads, the modern-day Thoothukudi on the south-eastern tip of India, thereby resulting in the fortunate release of her British prisoners. Mr Collier was not so lucky however, as he was retained aboard the captured Portuguese vessel which was ordered straight to the Isle de France, and so it was that his status and that of his remaining colleagues passed from castaway to prisoners of war at one fell swoop.

It was not until August 1793 that the frigate Thetis 38, Captain Francis John Hartwell, brought home news of the Winterton s loss, the information having been carried to St. Helena on 15 June by an American brig that had touched at the Isle de France after Mr de Souza had arrived there aboard the French ship from Mozambique. Much was made in the newspapers of Captain Dundas heroism and the fact that it appeared he had sacrificed his own life to ensure the survival of the female passengers on the poop deck. What was not known at the time was that the remaining survivors had been rescued from Madagascar but had then been made prisoner by the privateer s capture.

After over a year s detention on the Isle de France Collier was eventually released, and he sailed for Madras at the end of 1794. Here he rejoined the navy as soon as his health allowed, and he was given the command of a small tender by Commodore Peter Rainier. Typically his luck soon ran out, for upon this vessel being surveyed at the Cape she was deemed unfit for service. After returning to Madras Collier was then advised by Rainier to go home to further his career, although at least by the time he arrived back in England during May 1799 he had been commissioned lieutenant. Thereafter his considerable all-round skills saw him promptly promoted commander in September and posted captain in 1802, and after a successful career in command of the frigates Minerva 32 and Surveillante 38 he was awarded a baronetcy in 1814.

Sadly the last years of Collier s life were blighted by suggestions of cowardice and incompetence concerning an incident in the War of 1812 that were laid at his door by the naval historian, William James. Amidst many fears that he would take his own life he eventually committed suicide in 1824 at the age of 50.