Having been captured without opposition in the previous month, the anchorage at Rhode Island should have been a safe haven for the British in January 1777. However, this was not withstanding the arrival on the station of the frigate Diamond 32, Captain Charles Fielding, whose first lieutenant was an officer who would become one of the most notorious and controversial in the service as he rose through the ranks – John Thomas Duckworth. 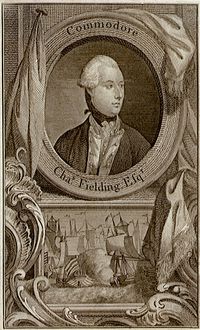 The Diamond had not been in the anchorage many days after returning from a cruise when she was obliged to fire an obligatory salute to the flag. Whilst at sea she had been engaged in a gunnery drill that had involved loading and unloading the cannon with shot. This should have been a harmless enough exercise but for the fact that one gun crew had decided to double-shot their cannon rather than load it with a single ball.

A competent first lieutenant would have ensured that all the balls were withdrawn from the cannon preparatory to firing a salute, but Duckworth was more renowned for his arrogance than his competence. He did manage to count all the balls removed from the cannon and finding that there was one ball for each gun he expressed satisfaction. So it was that when the salute was fired the unidentified ball shot across the bay and entered the galley of the transport Grand Duke of Russia, killing five seamen and wounding another two who were warming themselves around a fire.

Being a strict adherent to the articles of war Captain Fielding requested that a court martial be arraigned on Duckworth, the gunner Charles Rex, his mates and the gun-crew concerned, the charge being that of neglect of duty. Incredibly none of the accused were named in the charge other than by their official rank, Captain Fielding was allowed to sit on the court-martial of his own officers and men, and the deaths of the sailors on the transport were not mentioned. The Rhode Island whitewash was completed with the inevitable acquittal of the defendants, and with the thanks of the court of seven captains being bestowed on Duckworth for actually bothering to count the shot in the first place!

When the irregular proceedings of the court martial were brought to the attention of the commander-in-chief at New York, Vice-Admiral Lord Howe, he ordered that it reconvene with the men being charged as principals or accessories in the death of the five seamen late belonging to the Grand Duke of Russia transport . Initially the Rhode Island captains refused to sit again, claiming that as the defendants had been tried once already it would be an injustice to request them to face the court once more. The incorruptible Lord Howe was having none of that, and a letter was soon dispatched to Commodore Sir Peter Parker, commanding at Rhode Island, indicating that the captains could expect to be suspended if they did not obey his instructions.

Needless to say the second court-martial refused to hear any further evidence to that which had previously been examined, and the captains accepted the plea of the accused that they had already been acquitted of the charge of neglect of duty and thus could only be acquitted of the charge of murder. The court therefore presented another not guilty verdict, and the defendants were once more acquitted.

When at a later date Lord Howe came to Rhode Island he requested to see Duckworth in order to explain that he had ordered the second court-martial in his role as High Commissioner to ensure that Duckworth be legally tried and thus not run the risk of facing any civil action. It was perhaps typical of the great admiral that he had been so scrupulous and yet so unable to previously make his intentions clear. As far as he was concerned however, justice had not only been done but had been seen to have been done.

Captain Fielding himself was not unused to tragedy, as several years earlier, whilst commanding the guardship Kent 74 at Plymouth, he had suffered the horror of seeing his ship explode in the act of saluting the flag of Vice-Admiral Sir James Douglas, causing over forty casualties. He had been unlucky then, and he was perhaps equally unlucky to have Duckworth as his first lieutenant in 1777. It was little wonder that his contemporaries viewed him as a gloomy and grumpy individual!