It is fair to say that Captain Isaac Prescott was probably a typical old school sea officer, but as his trial in the Consistory Court of Doctor’s Commons for ‘wanton, tyrannical, unprovoked and savage cruelty towards his wife’ would prove in 1785, he was certainly no gentleman.

Born in 1737, Prescott had been commissioned lieutenant at the age of twenty-one but had then endured twenty long frustrating years before receiving his next step, to that of commander. Within a further five months he had been posted captain, and his first command in this rank was that of a flagship, Vice-Admiral Sir Robert Harland’s Queen 90, in which he had fought at the Battle of Ushant in July 1778. Thereafter his lack of ‘interest’ had seen him enjoy just two rather inauspicious appointments, to the Seaford 20 and Mercury 28, before retiring ashore in 1782.

In the meantime, on 5 January 1779, Prescott had married Jane Walter, the daughter of the Reverend Richard Walter of Portsmouth dockyard, who had served as Commodore George Anson’s chaplain during his famous voyage around the world almost forty years previously. The new Mrs Prescott would be described in court as of ‘very modest carriage and behaviour, and of a very meek, mild, affable, obliging, tractable, submissive and obedient temper’. A substantial dowry of two thousand guineas had been bestowed on the bridegroom by the Reverend Walter, who at the time of the wedding was convinced that his daughter had married a perfectly civil and pleasant gentleman.

He could not have been more wrong. 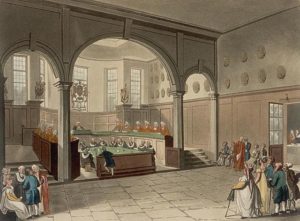 The Consistory Court of Doctor’s Commons where the trial of Captain Prescott took place.

Just six days into their marriage Captain Prescott demonstrated his own temper by thumping his new wife on the ear and throwing her bodily across a room in the modest lodgings which they had taken on Portsmouth Common. A similar assault occurred a week later, and soon he was confining Mrs Prescott to a single room, beating her with both fists, and making her kneel for upwards of two hours in what would today be termed a ‘stress position’. Witnesses, including their landlady and Prescott’s servants, would testify that the captain regularly flew into a rage and used insulting, foul language against his wife for no apparent cause.

Towards the end of May, the Prescotts spent four days with friends at Lymington, during which visit the lady of the house was alerted by Mrs Prescott’s screams in the guest bed chamber and rushed upstairs to find the captain standing over his wife with a stick in his hand. Caught in the act, Prescott barged out of the room, swearing, and cursing his wife who was immediately examined and found to have sustained fresh marks and bruises on her back and neck. Next day, the precipitate arrival of the hostess in the garden prevented Mrs Prescott from receiving another beating, but not long after the couple had retired upstairs the visibly distressed captain’s wife appeared at an open window crying out for vinegar to ease the pain of a wound that had been inflicted on her thumb. It was telling and typical of such bullying and cowardly behaviour that in company that evening Prescott was recorded as displaying tenderness and comfort to his misused wife.

Although it was not unusual for Prescott to become alarmed at the thought that he had gone too far, his savage outbursts were such that he simply could not conceal the matrimonial violence from the outside world. A friend of Mrs Prescott’s regularly witnessed the captain’s furious passions despite his repeated assertions to her that he was fortunate to have such an amiable wife. A regular witness to the ill-treatment, although she would be too young to testify, was Prescott’s illegitimate eleven-year-old daughter, Georgiana, in whose room Mrs Prescott often sought sanctuary. A servant, John Silk, was even assaulted for trying to sneak Mrs Prescott some breakfast after her husband had refused her to partake of some, the denial of food being but one of his many ill-treatments.

On 3 June a pregnant Mrs Prescott was picking fruit in the garden when the captain appeared and started throwing mud and stones at her. Snatching a bunch of cherries from the ground, he forced them into her mouth and struck her a bruising blow with his fist. The abuse did not stop when he took her aboard his new command, the Seaford 20, for in front of Georgiana he pulled his wife’s dress up over her face before ordering his coxswain to come into the cabin and view her. Thereafter, and despite Mrs Prescott’s pregnancy, the torment continued with blows to the stomach and the vigorous rubbing of her face, and although there was some respite when the Seaford sailed for Newfoundland with a convoy, it re-commenced once Prescott returned home in November, a new abuse being to make her stand in the cold for several hours.

In the spring of 1781 Prescott returned home after a brief duty with Commodore George Johnstone’s squadron off Lisbon, and prior to sailing for Newfoundland in the early summer he re-commenced his campaign of violence by slashing his wife on the elbow with his cane and even biting her on the face when he caught her writing to her father. By now spitting, kicking, throwing hot drinks and dragging Mrs Prescott down the staircase by her heels had been added to his repertoire, and when he came home in February 1782 from his duty in Newfoundland the torture was enhanced by the blackening of her face with tongs. In October he attempted to cut the clothes from her back with a garden knife, and on the 28th of that month, despite her again being with child, he beat her so cruelly that a maidservant rushed to her defence, only to be locked out of the room so that the assault could continue.

Unable to sustain her brutal treatment any longer, Mrs Prescott eventually fled the matrimonial home at Teddington on 6 November 1782 and returned to the sanctuary of her father. Thereafter she did not have any further contact with her violent husband, and at his trial in 1785 the court awarded her a divorce for reasons of cruelty, with Prescott being ordered to pay his ex-wife the sum of ninety pounds per year for the rest of her life.

Although never re-employed, the shamed Prescott rose with seniority to become a full admiral on 9 November 1805, and he died at the age of ninety-three on 3 May 1830, being at that time the second most senior officer in the service. One of his two sons would drown whilst returning from East India Company service in 1806, but the other, Henry Prescott, would have a long and distinguished service, culminating in his appointment as commander-in-chief and governor of the Newfoundland station and then becoming a lord of the Admiralty and earning a knighthood. Evidently, he was far more of a gentleman than his father.