The 12-pounder frigate Blonde 32 had been built in France during the mid 1750 s, but in February 1760 had been one of three French vessels captured in a stunning action off the Isle of Man by a British squadron commanded by Captain John Elliot. After service in the Seven Years War, and apart from the occasional survey and repair, she had been in laid up from 1763 until recommissioned by Captain Philemon Pownall for the American Revolutionary War in 1775. Since then she had remained in North American waters without gaining any opportunity for distinction, and on 24 September 1781 the 27 year-old thorough-going seaman Captain Edward Thornbrough had been posted to her by the commander-in-chief, Rear-Admiral Thomas Graves.

On 8 May 1782, being on a cruise in Boston Bay with orders to track down a similarly sized Continental man-of-war, the Blonde fell in with seven American armed ships. These vessels, all of which she apparently forced to surrender, consisted of one ship of 22 guns, three of 20 guns, two of 16 guns and another of 12 guns. Having struck her colours the largest vessel, which would prove to be the 22-gun Lion, Commander William Tuck, from Beverley, Massachusetts, then bore away and Captain Thornbrough responded by ordering the Blonde to chase. The flight of the Lion to leeward gave the remaining six vessels the opportunity to disperse, and with the night coming on Thornbrough was only able to carry through the capture of the larger vessel, which he took in tow.

Having secured his prize and found her to be laden with spars and masts that had been bound for the French fleet in the West Indies, Thornbrough set sail for Halifax, Nova Scotia. Yet the Blonde was never to reach that port, for on 10 May she drove aground on a reef of rocks off Seal Island on the southern tip of Nova Scotia near Cape Sable Island, some one hundred and fifty miles short of her destination. The prize ship Lion was in no position to help the Blonde and instead made the best of her way to Halifax. 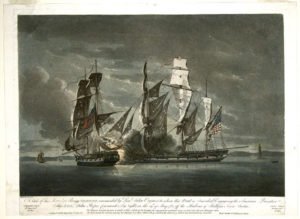 Having been rescued from the wreck of the Blonde Captain Thornbrough and members of his crew were aboard the Observer when she defeated the American privateer Saucy Jack whilst returning to Halifax.

Despite the round-the-clock efforts of both the British crew and sixty-four prisoners from the Lion who helped at the pumps, it soon became apparent that the Blonde could not be saved. Fortunately the officers and men were able to construct a raft which was used to ferry them to a nearby uninhabited island, and only one man was lost in the operation, apparently through his own intransigence. For the next two days the men of the Blonde and their American prisoners remained in some hardship on the barren island with barely any shelter from the un-abating rain, their sole subsistence being vetches. They were providentially saved from this predicament by two American privateers which arrived on 12 May.

Given Captain Thornbrough s generosity and kindness to his American prisoners the privateer captains, Daniel Adams of the Salem-based sloop Lively, and Noah Stoddard of the Boston-based schooner Scammell, delivered supplies ashore, and then a day or so later took all the shipwrecked men aboard. After seeing them well fed the Americans landed the British further up Nova Scotia s western coast at Yarmouth. In reciprocity for their humanity the two sides then provided each other with passports to secure them from detention if captured on their way back to their respective home ports, and whilst one of the Blonde s parties then set off overland for Halifax on the eastern coast the other under Thornbrough took two shallops to sail for the same port.

In the meantime the Blonde s prize Lion had reached Halifax where a number of her men were placed aboard the brig Observer 14, Lieutenant John Crymes, and despatched on a cruise with orders to rescue the stranded seamen. Coming across the shallops shortly after putting to sea, they took Thornbrough and about a hundred of his men aboard and set off for Halifax.

It was not to be the end of the excitement for the men of the Blonde however, for on approaching Halifax at about 6 p.m. on the evening of 28 May the Observer found herself under pursuit by a strange sail which within a couple of hours had come down within hailing distance. This vessel would prove to be the Massachusetts-owned privateer Saucy Jack 14, and as soon as she realised that she had stumbled upon a British man of war crewed by what appeared to be a phenomenal amount of men she turned tail and fled.

For the Americans however there would be no escape, and within a couple of hours the Observer had brought the Saucy Jack to action. As was the custom, Lieutenant Crymes commanded his own ship in the engagement whilst his superior officer, Captain Thornbrough, volunteered at a gun. The American captain was felled by the first broadside, and within a couple of hours the privateer had lost seven men killed and was in poor shape. An initial British boarding attempt was repulsed, whereupon the Saucy Jack tried to flee once more but was run down to eventually strike her colours at 2 a.m. on the 29th. Her stout resistance had inflicted casualties of three men killed and five wounded, including Lieutenant Crymes, on the Observer.

Having returned with the Observer and her prize to Halifax Captain Thornbrough promptly requested that a letter of commendation to the American captains be published in the Nova Scotia Gazette, which duly appeared on 11 June. He was subsequently acquitted by a court-martial for the loss of his vessel and after returning to England was soon given another ship. Thereafter he would rise through the ranks, so that by the end of his remarkable sixty year career he would have held a number of important commands, including that of commander-in-chief of the Downs, Irish and Portsmouth stations.