With their marine forces being unable to make any significant impact upon the superiority of the British Navy the Americans soon began considering more ingenious forms of warfare, and one such attempt was a submersible attack that was perpetrated on Vice-Admiral Lord Howe’s flagship the Eagle 64 by David Bushnell, a student of Yale University and native of Connecticut.

The young man had invented an egg-shaped submersible machine named the Turtle which was designed to manoeuvre underwater alongside a man-of-war and allow the operator to screw a charge into its hull. This charge consisted of one hundred and fifty pounds of gunpowder which would be ignited by a clockwork and flintlock fuse. Propulsion of the Turtle was achieved by the laborious method of turning her paddles with a crank, a snorkel breathing tube provided air to the operative, and glass panels at the top of the machine allowed him to look out. 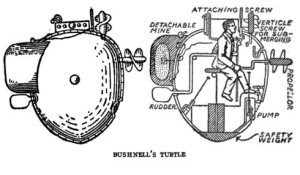 When General Washington learned of the invention he quickly commissioned it for use against the British Fleet anchored off Staten Island, New York. As Bushnell found the rigours of operating it beyond his own strength Ezra Lee, a sergeant in the rebel army, volunteered to pilot the machine, and on the night of 6 September he set out to attack the Eagle.

Lee was put into the water several miles up-tide of the British fleet in order to drift down upon their anchorage. It was to his misfortune that the strong tide actually carried him past the flagship, obliging him to expend a great degree of energy in clawing back to attack her. The operation of the Turtle was made all the more difficult by the lack of fresh air, and the greater exertion required the more rapidly the operator tired. By the time Lee arrived alongside the Eagle and attempted to screw the charge into her hull he was greatly fatigued and could not manage the task. As dawn was breaking he therefore decided to abandon the attempt and to use the incoming tide to carry him ashore. A British guard-boat spotted him and gave chase, whereupon he jettisoned the charge. This promptly exploded, much to his enemy’s confusion. By the time Lee reached the shoreline he had been rendered unconscious through his exertions, and he had to be hauled out of the submersible by his compatriots.

Alternative theories were put forward for the failure of the mission: He was unfortunate in encountering a metal bracing on the Eagle s keel; he was in fact trying to screw in to the rudder; he had lost his senses through constantly inhaling his own foul air; forces of gravity had meant that each time he pressed against the Eagle’s hull the Turtle drifted away. In all events it was a brave and inspired attack but one never to be repeated, as shortly afterwards the Americans evacuated New York and the Turtle was destroyed in October when the sloop it was being carried on was sunk by Hyde Parker s squadron.