Whilst the British and many members of the rebel Congress prevaricated over taking up arms to resolve their dispute, two American adventurers, Benedict Arnold and Ethan Allen, decided to attack the British army outposts of Ticonderoga and Crown Point at the northern end of the crucial waterway of Lake Champlain. At the head of two hundred and seventy men they captured these posts in an assault in May 1775. Their occupation not only facilitated a possible American attack on the vital St. Lawrence waterway, but more immediately delayed the movement south of a large body of troops commanded by Major-General Sir Guy Carleton, the British governor and commander-in-chief in Canada, there being no alternative route through the forested wilderness.

Four months later the American Congress, now committed to a more intensive war footing, decided to launch an assault on Canada, and by 13 November, having progressed up Lake Champlain, the Americans were able to occupy Montreal. They next advanced upon the British stronghold at Quebec, and after an abortive attack in a snowstorm on New Year s Eve, during which their leader, Brigadier-General Richard Montgomery fell, the rebels settled down to a blockade of the city.

When Carleton sent home news of the siege a relieving squadron under the command of Captain Charles Douglas was rapidly despatched from England in accordance with a plan of campaign laid down by Rear-Admiral Sir Hugh Palliser at the Admiralty. The initial force consisted of Douglas Isis 50, which left Portland on 11 March 1776 carrying the grenadier company of the 29th Regiment of Infantry, together with the frigate Surprise 28, Captain Robert Linzee, and sloop Martin, Captain Henry Harvey, which left Plymouth on 20 March. 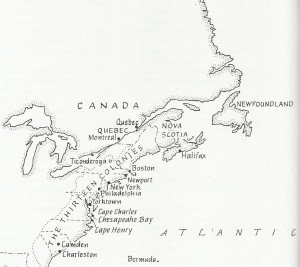 Quebec and the Thirteen colonies

On 12 April the Isis had raced to within twenty miles off the mouth of the St. Lawrence when she came upon pack ice some ten feet thick. Nothing daunted, and determined to achieve the relief of Quebec, Douglas smashed into the natural obstacle at a speed of five knots and ignoring the splintered wood that tore from the Isis bow he found that it parted. For nine days and over a hundred miles his ship battled through snowstorms and freezing conditions, the only relief for the seamen coming when they found amusement in the soldiers being forced to exercise on the field of ice. Eventually the Isis reached Anticosti Island on the 21st and later that evening entered the St. Lawrence. Despite fog and head winds the passage then became somewhat easier, the Isis anchoring near the Pilgrim Islands in a blizzard on 30 April, and being joined on 3 May by the Surprise and Martin at the Isle au Coudres. Here Douglas obtained the services of some French pilots. At dawn on 6 May, the Surprise, which had been sent on ahead the previous evening, was in signalling distance of Quebec and after anchoring between the rebel battery on Point Levi and the town she opened up a bombardment of the American positions. Later that day the Isis and Merlin arrived.

Without delay the two hundred troops were landed, and these reinforcements together with the morale-boosting presence of the men-of-war allowed General Carleton to take the attack to the enemy. The starving Americans, riddled with small-pox, rapidly threw over their siege in favour of making a retreat, one that the Surprise and Martin were able to harry by proceeding up river to the Richelieu Rapids. In doing so they were also able to recover the sunken captured mercantile brig Gasp 6 which had been taken off Boston by two privateers in the previous November, and which proved to be salvageable, although she was never re-employed in the Navy. Another capture was the American schooner Maria 6, whose crew fled ashore into the forests rather than become prisoners of war.

In the meantime General Howe had been able to despatch the 47th Regiment to Quebec from Halifax, this force reaching the city on 8 May, under escort of the Niger 32, Captain George Talbot. Two days later the remainder of the 29th Regiment arrived from England aboard the transports Lord Howe and Bute, together with three victuallers, the British Queen, Agnes and Beaver, all five vessels being under the escort of the newly commissioned Triton 28, Captain Skeffington Lutwidge, which had sailed from Plymouth on 16 March. Now the Army could really take the fight to the rebels, and by the 20th the transports were sailing up the St. Lawrence to further harass the enemy. More reinforcements arrived from England towards the end of the month, and although the Americans attempted a daring counter-attack at Trois Rivieres they were soon put to flight.

By 3 July the rebelshad retreated in poor order and, without their plunder in poor heart, to Crown Point with General Carleton in pursuit. What had been a promising American attack had ignited a potentially dangerous British counter-assault with the arrival of the Navy, and the scene was now set for a battle to gain control of Lake Champlain, the gateway to both Canada and New York.

For the British sailors who had striven in such harsh conditions to bring the Isis, Surprise and Martin to Quebec there was a reward from a grateful King double pay for the period from their sailing from England until the raising of the siege.