The British frigate Fox 28, Captain Patrick Fotheringham, was patrolling the Grand Banks off Newfoundland on the morning of Saturday 7 June when at 5 a.m. two unknown vessels were seen bearing down at great speed from to windward. These were the rebel American frigates Hancock 34, Commodore John Manley, who had been born in Torbay, England, and the Boston 24, Captain Hector McNeill, who was Irish born of Scottish descent.

The two American frigates were the heaviest and swiftest sail of a force of ten rebel vessels that had been sent out from Boston on 21 May to cruise off the Newfoundland Banks in order to take advantage of the British naval concentration at New York. From the outset there had been difficulties within the squadron, not least because the two senior American commanders were on appalling terms, with McNeill being particularly scathing of the commodore. Furthermore, during the first week of the cruise the other vessels, being privateers, had decided to go their own way rather than risk being part of such a large force that would be susceptible to a reaction from the British, and thus it was that the rivals had been left to go it alone in their endeavour to discomfort their enemy.

An early success had been the capture on 29 May of a brig from a convoy under the escort of the Somerset 64, Captain George Ourry, and Mercury 20, Captain James Montagu. At 4 a.m. the next morning the two frigates had fallen in once more with the Somerset and three troop transports, and much against McNeill’s better judgement, or perhaps to spite it, Manley had decided to risk an engagement in order to pick off another prize. After sending the Boston and the captured brig to the south, he had placed the Hancock in the path of the oncoming Somerset, but after suffering the fire of the larger ship’s bow-chasers Manley had decided that flight was the better option. Only by McNeil making a feint at the transports was the Somerset distracted from running down and capturing the commodore’s frigate. To his credit, Manley wasted little time in getting aboard the Boston to thank McNeill for his efforts, but it would not be long before they were at loggerheads again, despite sharing in a far more significant prize. 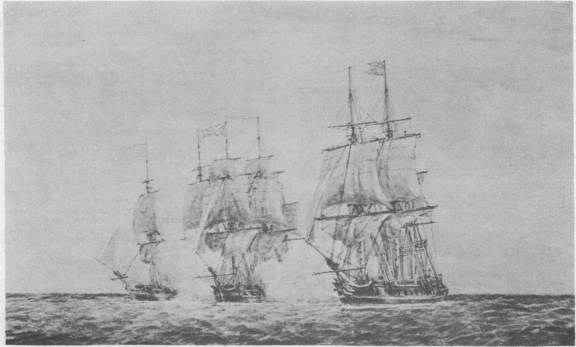 The rebel frigates Hancock and Boston close on HMS Fox

It was after the two frigates had turned their heads back to the north to resume their cruise that they discovered the Fox. Within an hour the Hancock, flying British colours, had come within close range of Fortheringham’s command. Believing that the rebels did not possess two such large vessels, the British frigate failed to clear for action in sufficient time to offer a riposte to the Hancock’s initial broadside, the rebel frigate by now having run up the flag of the thirteen colonies. There followed a verbal exchange, the American responding to Fotheringham’s hailed enquiry to the effect that they were American rovers, and ordering the British frigate to strike immediately. Fotheringham gallantly replied that he intended to ‘strike’ as soon as possible. When the British did respond, a fiercely fought half-hour action ensued but, with the Boston coming up hand over fist, Fotheringham was forced to turn tail whilst still deploying his stern-chasers on his erstwhile opponent. Nevertheless, the faster-sailing Hancock was easily able to remain in contact over the next four hours, and a second action commenced at noon.

For a further hour and a quarter, the Fox fought off her opponent, not that all the rebels appeared to be full of fight as Captain Manley could be seen running up and down her deck in his rolled-up shirtsleeves, brandishing a cutlass above his head and threatening to cut down any man who attempted to leave his quarters. After about an hour, the arrival of the Boston on the Fox’s starboard quarter added her cannons to those of the beleaguered Hancock, which was now able to engage the British frigate on her larboard bow. The dual assault, which concentrated on disabling the Fox rather than causing casualties, brought down her main yard, and with her mainmast shot through and wheel disengaged it became impossible for Fotheringham to manoeuvre his command.

A fire, which broke out when a burning wad from the Boston lodged in her mizzen chains, was unseen by the British and might even have dramatically enhanced the damage to the Fox. Displaying unparalleled chivalry, or perhaps not wishing to lose a valuable prize, McNeill hailed his opponent to warn him of the danger and a ceasefire was maintained until the flames were extinguished. At 1.45, an hour and three quarters after the second action had commenced, and with two men killed including the lieutenant of Marines, Hon. James John Napier, the son of the 6th Lord Napier, and ten men wounded, Captain Fotheringham consulted his lieutenants, the gunner, and the boatswain, and decided to strike the Fox’s colours. During the engagement the Hancock had lost eight men, whilst the Boston had lost one topman overboard in her frantic attempt to join the fight.

There next followed a farcical episode that spoke volumes for the mutual antipathy between the American commanders. Perhaps he considered that his late arrival had saved the Hancock from striking to the Fox, for McNeill despatched his first lieutenant, John Browne, to take possession of the British frigate, much to the astonishment of the Hancock’s crew and in particular Commodore Manley. A furious discourse ensued which resulted in the first lieutenant returning to the Boston.

After finally securing their prize, the Americans continued on their cruise with ultimately fateful consequences for the Hancock. Those of the British prisoners who could be accommodated on two captured fishing-vessels were despatched to Newfoundland, arriving there within four days to exchange with an equal number of American prisoners. The remaining forty men, including Captain Fotheringham and all the officers, were removed to the Hancock from the Boston, which was much to their chagrin as Manley was no gentleman. Fate determined however that they would be returned to their countrymen a month later following the Hancock’s capture by the Rainbow, and in the meantime they at least they had had the satisfaction of witnessing at first hand how much damage they had done to the Hancock, and of seeing her pumps in action to quell the leaks they had caused her to sustain.

Following his release, and upon being examined by a court martial in England presided over by Admiral Sir Thomas Pye aboard the Centaur 74 in Portsmouth harbour on 3 March 1778 , Captain Fotheringham was honourably acquitted for the loss of the Fox. Other members of the court-martial were Captains John Evans, Andrew Wilkinson, Charles Middleton, Richard King, Jonathon Faulknor, Mark Robinson, Richard Edwards, John Elliot, Digby Dent, Hon Frederick Maitland, Hon John Leveson-Gower and George Bowyer. Fotheringham would later be employed on the Jamaican station where he died, the captain of the Ruby 64, in the summer of 1781.