The Occupation of Rhode Island – 8 December 1776

The last act of the British campaign in North America during 1776 was the occupation of Rhode Island and Narragansett Bay by a squadron under the command of Commodore Sir Peter Parker consisting of five 50-gun ships together with a further eight smaller vessels and fifty-one transports. 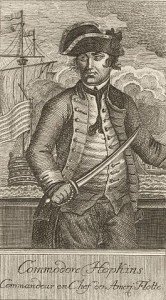 Esek Hopkins, who had overall command of the Colonial privateers at Newport, Rhode Island.

On 1 December Commodore William Hotham departed New York in command of the Brune 32, Mercury 20, the sloop Kingfisher 14 and the transports carrying seven thousand troops under the command of Lieutenant-Generals Sir Henry Clinton and Lord Hugh Percy, making their way via Long Island Sound. Meanwhile Commodore Parker, who had been given the expedition in lieu of Lord Shuldham who had leave to return home, took the larger men-of war to sea via Sandy Hook and the force made a rendezvous four days later in Blackpoint Bay in the Sound which offered a protected anchorage.

Weighing anchor again on the 6th, the expedition voyaged north towards Rhode Island, sailing around Conanicut Island to avoid the rebel coastal batteries and after coming to anchor at 3pm on the 7th the Experiment 50 led the other ships up the Narragansett Passage on the 8th. The perfectly disciplined landings commenced under the superintendence of Captain Tobias Caulfield of the Chatham 50 at 8 a.m. on 8 December and were completed by 3 p.m. Not surprisingly the rebel troops did not hang around to keep the equally anti-British residents company but took immediate flight before the Army s advance, fleeing to Bristol Ferry and from there to the mainland. General Clinton then ordered a battalion to take possession of Newport.

The natural harbour of Newport had been the leading American privateer base, and although many had since departed for European and West Indian waters, three frigates, the Warren 32, Columbus 30 and Providence 28, together with a 16-gun brig, several schooners and sloops, was discovered there under the command of Esek Hopkins. This squadron fled up Narragansett Bay to Providence, where the Navy bottled it up and where it remained inactive for over a year.

Rhode Island had been coveted by both sides, and was an excellent addition to the British cause, being able to contain the entire fleet in perfect safety, and situated within two days sailing of Boston, New York and Philadelphia. Commodore Parker retained the command of the base until November 1777, but sadly, after being brilliantly defended by Vice-Admiral Lord Howe a year later, Clinton abandoned it in 1779, much to the despair of many in the Navy. In 1780 the French occupied it, which proved much to their advantage.

Captain James Wallace of the Experiment was sent home with the despatches announcing Rhode Island s capture and he was accordingly honoured with a knighthood. The duplicate despatches were carried home by Captain James Montagu of the Mercury.