On 22 December 1786 the frigate Phaeton 38, Captain George Dawson, left Portsmouth bound for the Mediterranean station where the peace-time squadron consisted of the commander-in-chief s 50-gun vessel, four or so frigates and a couple of brigs or sloops. Here the navy s responsibilities were largely mundane, such as the duty that the Phaeton found herself undertaking in the early summer of 1788 when she was instructed to collect merchant vessels from the various ports of Italy and escort them safely to Gibraltar. What was not mundane however was the discord aboard the Phaeton, for it soon became apparent that the officers had split into three contending camps with Captain Dawson seemingly unable, or more damningly unwilling, to deal with the situation.

Dawson was evidently not an easy-going man. Of indeterminate origin and age, but certainly not in the first flush of youth, he had waited fourteen years for promotion to the rank of commander after receiving his lieutenant s commission in 1762, and it is possible that the delay had inculcated in him an unfortunate disposition. Although few details of his life have filtered down through history, the anecdote that as the president of a court martial he had told a condemned prisoner to prepare himself for death without delay, and to thank God it was no worse for him , suggests he possessed a somewhat harsh and unsympathetic character. 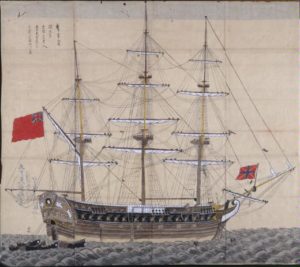 Months of continuous discord and disputes culminated on the night of 6 July 1788 whilst the frigate was at Lisbon and Captain Dawson was ashore. At midnight a commotion awoke the third lieutenant, Charles Stocker, and immediately the gunroom steward spilled into his cabin crying out that the surgeon, a Scottish family man by the name of David Wardrope, was attacking the first lieutenant, William Wall. Upon leaping out of his cot Stocker beheld the naked surgeon thrashing about, and after retiring for a couple of minutes to clothe himself he stepped out into the gunroom and ordered the assailant back to his cabin, with which instruction a calmer Wardrope obediently complied. Stocker then found a bloodied and bruised Wall prone on the deck and helped him back to his cot.

The surgeon s crime of striking a senior officer was one which could only be punished by the death penalty if brought before a court-martial, but Wall and the second lieutenant, John Lucas, decided to hush the matter up; indeed Mr Wall and the surgeon soon patched up their differences, not least because Wardrope was regarded as a valuable and worthy member of society whose aberration had been temporary. But although the first lieutenant may have considered the matter closed Mr Stocker had other ideas, and sure enough when Wardrope was brought to a court martial at the instigation of the third lieutenant he was sentenced to death. At the same time the first and second lieutenants were placed under suspension for inattention to duty in so much that they had failed to act on the assault, whilst just to compound matters the sailing master, John Wilkie, began to prepare a series of charges against Captain Dawson.

Fortunately for Wardrope the commander-in-chief in the Mediterranean, Commodore Phillips Cosby, decided that before any sentence could be carried out it would be prudent to order the Phaeton home so that the surgeon could plead for mercy, and that enough officers of rank could be convened to investigate by court martial the disputes that had broken out amongst the frigate s captain and his officers. Apparently the Phaeton was in such a state of disorder that it was openly stated how gratified the commodore was to be getting rid of her, whilst also going home was the Myrmidon 22, Captain Thomas Rawe, whose officers would provide evidence at the court-martials to follow.

The Phaeton arrived in company with the Myrmidon at Portsmouth from Gibraltar in the latter part of October, and she had barely dropped anchor before Rear-Admiral Joseph Peyton received orders to convene a court-martial aboard the guardship Edgar 74, Captain Charles Thompson, to try the two lieutenants for neglect of duty, and more specifically Wall for allowing himself to be beaten by the surgeon without bringing him to account, and Lucas for being an accessory to the proceedings. On Tuesday 28 October the trial opened with the prosecution being led by Lieutenant Stocker, and with the support of Mr Wilkie. In addition to Rear-Admiral Peyton the other members of the court martial were Captains Charles Thompson, Archibald Dickson, George Anson Byron, John Bourmaster, Edward Thornbrough, Robert Man, John Inglefield, Hon. George Berkeley, John Knight, Hugh Christian, Andrew Snape Douglas and Isaac Smith.

The evidence soon established that the physical assault on Mr Wall had indeed taken place, but with the extenuating circumstance that although Mr Wardrope was regarded as a genuinely decent man and a skilled surgeon when not under the influence of drink, he was an apparent maniac when in liquor as a result of a blow to the head received during earlier service. Lieutenants Wall and Lucas had felt constrained by motives of humanity to let the assault pass without charge, although these were motives that as professional sea-officers it had been their duty to override. Requesting a similar leniency from the court to that which they had shown Mr Wardrope, Wall and Lucas awaited their fate, and after a three-day trial the court came to the conclusion that the charges had been partly proved, and accordingly the two lieutenants were dismissed the Phaeton whilst being allowed to keep their seniority.

Then on 3 November the excitement in Portsmouth increased immeasurably when an express was received from the Admiralty ordering the trial of Captain Dawson on thirteen charges brought against him by the sailing master, Mr Wilkie. No sooner was the missive read than the master-at-arms put off from the Edgar in a boat to offer Dawson the choice of being detained aboard the Phaeton or the flagship. The captain chose the former, but being under suspension, and with the first and second lieutenants dismissed, Lieutenant Stocker took command of the frigate.

At 9 a.m. on Friday 7 November the trial of Captain Dawson began with Admiral Peyton and the other members of the previous court-martial again in attendance. The master s whole litany of charges included interference in the piloting of the frigate, refusal to provide a boat to allow the master to further his professional knowledge, of interfering in the purser s duties, of cruelty and oppression, in particular towards Lieutenant Stocker, of turning one gentleman out of the ship in a foreign port for no good reason, for degrading another by forcing him off the quarterdeck for no apparent reason and allowing him to walk on the forecastle only, of allowing and conniving in riotous behaviour on board, of seizing the men s property for his own use, of failing to acknowledge Sunday as a holy day to the detriment of those who wished to worship, resulting in the propagation and encouragement of vice and immorality , of providing false statements and reports to the Navy Board, and of simply being mean and by repute a common liar!

Disharmony there had evidently been aboard the Phaeton, but the court-martial of Captain Dawson now caused an outbreak of discord amongst the ships at Portsmouth, and fights broke out aboard the flagship Edgar between those junior officers who supported Dawson, and those who supported his accuser, Wilkie. One commentator on board the Edgar was already convinced that the master s charges were malicious, although his description of Wilkie as reptilian in appearance suggested a not altogether convincing basis on which to take sides. Clearly the newspapers also had little time for Wilkie, and whilst Mr Wall s evidence was described as tedious and of little value, and then Mr Lucas was labelled as being deficient in memory, Wilkie was said to be much confused and liable to correction by the court.

The trial eventually ended after twelve days, during which time Dawson had briefly been allowed extra time to prepare his defence. Although the court found most of the charges to be ill-founded, scandalous, and subversive of all good government and discipline of the navy part of four charges were proved, and accordingly Captain Dawson was sentenced to be dismissed from His Majesty s Service for tyranny, oppression, malversation, suttling and such like , the latter hinting at corrupt behaviour in a position of trust.

The blood-letting was not finished yet, for now Captain Dawson brought Mr Wilkie to trial on four charges, and as part of these were also proved the sailing master was sentenced to be dismissed his ship on the basis of neglect of duty, disobedience, disrespect and drunkenness. Given that the Phaeton was due to be paid off the very next day this was a harsh pecuniary measure indeed.

As for David Wardrope, all seemed up for him when on 15 November the chaplains from the Colossus and Barfleur were ordered to attend him. Yet by now a petition for clemency had been sent to the King at Windsor on the basis that Wardrope had suffered a temporary lunacy, and after being removed to the Barfleur at the beginning of December he was granted a pardon by the King and later restored by an order in council to his former rank as a surgeon in the Royal Navy.