The Childers comes under fire off Brest – 2 January 1793

Although the War of the First Coalition between Republican France and the Austro / Prussian alliance had been raging throughout Europe since the previous April, it was not until the second day of 1793 that the first shots of the conflict involving Britain were unleashed, even though, at that stage, war with France had not been declared.

The incident came about after the Admiralty sent orders to Plymouth in December 1792, instructing the Druid 32, Captain Joseph Ellison, and the sloop Childers 14, Commander Robert Barlow, together with a cutter, to monitor the state of the French fleet at Brest. 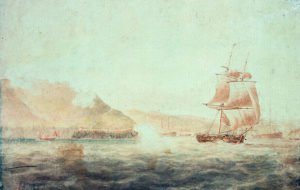 The Childers under fire at Brest

The Childers, armed with fourteen 4-pounder cannon and with a nominal crew of eighty men, had first been commissioned in the autumn of 1778 and had seen service in the Leeward Islands during the latter stages of the American Revolutionary War. Having been paid off in August 1783 she had remained in mothballs until commissioned for service in the Channel under Commander Richard Incledon Bury in November 1789. A year later the well-regarded 36 year-old Captain Bob Barlow, had assumed her command, and having served the previous three years in the Preventative Service he had continued in that duty.

On Wednesday 2 January the Childers was cruising off Brest under overcast skies and in baffling winds, and at about 2 p.m. she came within three-quarters of a mile of a French fort in the Goulet, the narrow channel leading up to the port. Suddenly a shot was fired over her starboard side, whereupon Captain Barlow ordered his colours run up to distinguish his vessel as a neutral. The French fort that had fired then ran up the tricolour with a red flag over the ensign and this was answered by another two forts. At this point it might have been prudent for Captain Barlow to withdraw, but the flood tide prevented him from doing so, and instead it carried the Childers a quarter mile nearer to the three forts, whereupon she was subjected to a ferocious crossfire.

Fortunately the Childers was equipped with sweeps, and upon taking to these her men were able to prevent her from being drawn further in towards the harbour, although she remained under fire from all three forts. Providentially a rising breeze then allowed the sloop to make sail, and Captain Barlow was able to take her to safety with only one French 48-pounder shot having struck home, and having thankfully suffered no casualties.

On 4 January the Childers entered the Cornish port of Fowey and Barlow and Lieutenant Robert Mends disembarked to set off for Plymouth, from where the captain took an express to London whilst the lieutenant reported to the local commander-in-chief, Rear-Admiral Phillips Cosby. Reaching the Admiralty on 7 January, Barlow was able to present the Lords Commissioners with the ball which had split into three pieces after smashing into a gun, and was able to report that he had identified three French sail of the line and five large frigates with their sales bent in Brest.

A month later France declared war on Britain, and bar a short period of peace it was a conflict that would envelop the greater part of the known world for the next twenty-three years. Somewhat fittingly therefore the first prize of the war was taken by Captain Barlow and the Childers when they captured the French privateer Patriote off Gravelines on 15 February. The Childers would continue in service to 1811, by which time Captain Barlow had retired ashore to pursue civil appointments, having made his name as a dashing frigate captain with the capture of two French frigates, the latter of which had seen him honoured with a knighthood.