In May 1790, with war clouds gathering over Britain as a result of the Nookta Sound dispute with Spain, Captain Charles Morice Pole was appointed to the frigate Melampus 36. Unfortunately, he was soon to find that rather than engaging in conflict with the enemy he would have to deal with a conflict in his own officer ranks.

One of the junior lieutenants aboard the Melampus was a petty tyrant by the name of Richard Hancorn, who had been commissioned to that rank aboard the sloop Bonetta, Commander William Henry Ricketts, on 15 February 1783. As soon as Hancorn joined the Melampus he made himself the enemy of the midshipman s berth by handing out harsh and unfair punishments for transgressions that were for the most part of a minor nature. One particular punishment, handed out to Midshipman William Butterfield, a twenty-four year old from a reputable Cornish family, was particular odious, for the young officer was lashed to a grating and hauled up to the mizzen peak in full view of the assembled vessels in the anchorage. His crime had been nothing other than to come up on deck fully rigged for an evening ashore without having advised Hancorn that he had received the permission from the first lieutenant, himself absent ashore, so to do. 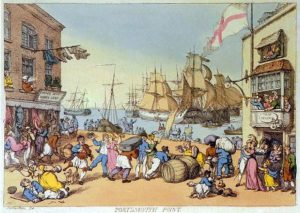 Not long afterwards Lieutenant Hancorn entered the Star and Garter Inn on Portsmouth Point to be followed some five minutes later by Butterfield and four other midshipmen by the names of Hannam, Hamlin, Parkinson and Trollop. Although Hannam was not from the Melampus he knew of Hancorn s tyrannical ways, and he lost no time in verbally abusing the lieutenant. The other midshipmen then joined in the harangue, and in no time Hancorn found himself challenged to five separate fights. Quite correctly, Hancorn responded that he was a superior officer, and that such behaviour towards him was totally reprehensible and at odds with the traditions of the service. His response only inflamed the young gentlemen further, and soon Hancorn found himself labelled a rascal, a scoundrel and a coward. Wisely deciding that discretion was the better part of valour, Hancorn vacated the premises, his exit being trumpeted by a further volley of insults and catcalls.

Returning to the Melampus, Hancorn reported the incident to Captain Pole who decided that the incident was worthy of censure, and that it should be reported to the port admiral at Portsmouth, Vice-Admiral Robert Roddam. The venerable admiral in turn referred the matter to the Admiralty, where the authorities decided that because the incident had occurred ashore it was not under their immediate jurisdiction, and that it should be referred to the Attorney-General.

Eventually the five midshipmen were brought to trial at the Winchester Assizes in early June 1791, and once the evidence had been heard the judge decided in favour of Mr Hancorn. Believing that a public censure might ruin the careers of the young officers, he referred the subject of their punishment back to the Admiralty with the proviso that the guilty parties had acknowledged their faults and had apologised to the full satisfaction of Hancorn. The naval authorities, taking into account the bullying of Butterfield by the lieutenant, then decided to let the matter rest and took no further action.

Even so, William Butterfield was so disillusioned by the affair that he decided to quit the Navy and enter the merchant service. Bizarrely, he was pressed into the Navy at the commencement of the French Revolutionary War three years later, although once his previous standing had been established he was reinstated to the quarterdeck, and in time he was commissioned lieutenant in 1794, posted captain in 1802, and advanced to the rank of rear-admiral in 1840.

As for Hancorn, he became attached to a philanthropic and financial scheme, led by amongst others Lieutenant Philip Beaver, which attempted to set up a colony on the island of Bulama off Sierra Leone for free blacks in 1792. Sadly he died on the island a weeks after the leaders of the expedition had decided to return home.