On 26 May, whilst on reconnaissance off Cape Tiburon, Haiti, the spar-decked ship Hyaena 24, Captain William Hargood, discovered a strange squadron to windward, and in accordance with standing orders from the commander-in-chief at Jamaica, Commodore John Ford, stood away to the west. On the next morning, the weather being squally and thick, the Hyaena was heading north when at about 11.30 she discovered a larger strange sail through the murk in the north-west. A private signal was ignored by the other vessel, upon which Captain Hargood took flight towards the south-east under pursuit by the stranger. This vessel would prove to be the French frigate Concorde 44, which was somewhat advanced of her consorts, the Eole 74, America 74 and three or four other frigates. 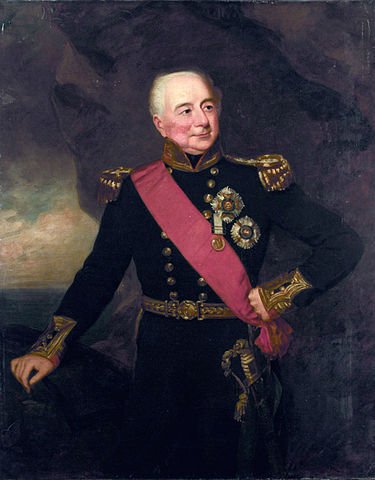 Captain Hargood portrayed in his later life as an admiral.

The 30-year-old Hargood, a former first lieutenant and good friend to Prince William, had joined the Hyaena at Plymouth on 25 April 1792, and had sailed from that port on 4 May to reach Barbados on the last day of the month, prior to heading for the Jamaican station. Here, within the first few weeks of receiving news of the French declaration of war in 1793, he had taken several prizes including a privateer schooner. The Hyaena, which had first been commissioned in 1778, was armed with twenty-two 9-pounder cannons on her gun deck and two six-pounder cannona on her quarterdeck, and although she had a nominal complement of one hundred and sixty men, she was about forty men short at this time, having been sent out to the West Indies with a peace-time complement. She was thus little match for her opponent, the recently commissioned Concorde, which bore an armament of twenty-six 18-pounder cannon on her upper deck, and four 36-pounder howitzers and ten 8-pounder cannons on her quarterdeck and forecastle. Her nominal complement was in excess of three hundred and twenty men.

Unfortunately for Captain Hargood the wind on the morning of 27 May was variable and the sea heavy, so that the Hyaena, encumbered as all such rated ships were by a heavy forecastle and quarterdeck, struggled to make headway. Soon her studdingsails were either carried or cut away, and when Hargood tried to shape a course across the bow of the Concorde an untimely gust of wind brought down his fore-topgallant mast, and with it a man who was lost to the sea. After a three-hour chase the Concorde ranged up on the Hyaena’s quarter, and realising that there was little chance of escape Hargood let loose a token fire from a few of his starboard quarter nine-pounders which was returned by some cannon in the French frigate’s waist. The wind then died to a calm, although not before it brought the Concorde alongside the Hyaena, and with no other option Hargood and his officers decided to lower their colours at about 2 p.m. The ship thus became the first British vessel in the war to become a prize to the French.

Hargood’s meagre crew were taken on board the Concorde as prisoners, whereupon they witnessed a short cruise against the British trade before the French frigate returned to Cap François on 11 June. A week later, after arguing his case with the French authorities, and with the support of the Concorde’s captain and the other French naval commanders, Hargood and all of his officers were granted parole ashore. At this stage the loss of their ship must have been soul-destroying, but what followed threatened their very lives.

At this time Haiti was in a state of insurrection, with the white settlers, the freed black and mulatto inhabitants, and the rebellious slave army led by Toussaint L’Ouverture all at loggerheads. Into the volatile mix had stepped two commissaries from the new French Republic, whose intention to grant full citizenship to all free blacks and mulattos but not the slaves was subverted when they were attacked by the white French sailors and the colonists. Desperately seeking allies, the commissaries issued a decree announcing the emancipation of any slave who would join the Republican army. Cap François exploded, and by nightfall on 21 June five hundred people had been killed, and all that remained of the town was burning cinders as the rebel black troops pillaged and murdered at will.

In such circumstances it was clearly unsafe for Captain Hargood and his officers to remain in the town. Leaving all their possessions behind, they ran for their lives through the exchanges of musketry and headed for the beach with scores of fleeing white residents before swimming out to their erstwhile opponent, the Concorde. The French had far more important issues to contend with than the confinement of their enemy, and having agreed that the deteriorating situation meant that the British could no longer be considered as prisoners of war they waived their parole and placed them aboard a cartel for Jamaica.

However, not all the officers had reached the Concorde, for the boatswain, the gunner, and two midshipmen, one of them David O’Brien Casey, had been captured by the mulatto forces and handed over to the commissaries. Casey and his comrades only survived the night of violence in Cap François through the determination of his black landlady and her servants who repeatedly extolled the slave intruders to let the British be. Four days later the men were marched to the rebel camp some four miles outside the town where they remained for upwards of six weeks in the open with barely any food or water whilst daily expecting execution. Once returned to the town they were placed in better circumstances in barracks, but even so the gunner died from the weeks of poor treatment before they were finally released. It was not the last time that Casey would find his life under threat during an uprising, for he later had the misfortune to be serving aboard the frigate Hermione during the bloody mutiny of 22 September 1797, and again he did well to survive it.

Meanwhile, on 28 June Captain Hargood and the majority of his officers had reached Port Royal where he immediately wrote of his command’s loss to the local commander-in-chief. After returning with his first lieutenant, Farmery Predam Epworth, to Plymouth in early October aboard the Hannibal 74, Captain John Colpoys, Hargood and his officers and crew were brought to a court martial aboard the Cambridge 80 in the Hamoaze on 11 October. Under the presidency of Rear-Admiral Rowland Cotton the evidence was heard and considered, and unsurprisingly they were honourably acquitted with the endorsement that every means had been used to prevent the capture of their ship.

Unfortunately, Lieutenant Epworth soon found himself a prisoner of the French again, for having joined the Alexander 74, Captain Richard Rodney Bligh, he was aboard her on 6 November 1794 when she was captured by Rear-Admiral Joseph Marie Nielly’s squadron. The Hyaena became a French privateer corvette, but she returned to British hands when she was captured off Tenerife by the Indefatigable 44, Captain Sir Edward Pellew, on 14 October 1797 after an eight-hour chase. The Concord also ended up in British colours, being captured off Brazil in August 1800 in most unlikely circumstances by the Belliqueuex 64, Captain Rowley Bulteel, and the convoy of East Indiamen she was escorting.