When the Treaty of Paris brought a conclusion to the Seven Years War in 1763, France lost all her territories in North America bar the islands of St. Pierre and Miquelon, which lay about fourteen miles to the south of Newfoundland, and which were ceded back to her after fifty years in British hands. The islands had originally been claimed by France in 1536.

St. Pierre and Miquelon were ideally situated to take advantage of the lucrative fisheries on the Newfoundland Banks, and under the terms of the treaty the French were allowed to carry on that activity. However, given their proximity to the surrounding British North American territories the Treaty of Paris had stipulated that the islands could not be used for military purposes, and neither could they be used to facilitate trading. Of the three main islands, which in total covered about ninety-three square miles, the more important was St. Pierre, which was about six miles long, and boasted the safer harbour, hence it was here that the governor’s residence and the majority of the population was housed. 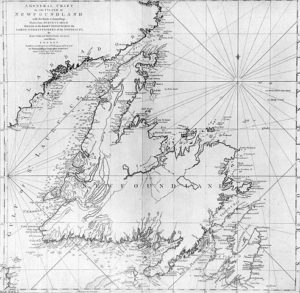 In July 1778 war with France became inevitable, and the first indication that the islands would be affected came when a Guernsey letter-of-marque intercepted a French snow bound for St. Pierre loaded with gunpowder, muskets, salt and bale goods to the value of fifteen thousand guineas. As the French were not allowed to militarize or trade out of the islands in accordance with the peace treaty, it being purely a sanctuary for the fisheries, the Guernsey men were allowed to keep the goods.

On 25 July Vice-Admiral John Montagu, the commander-in-chief on the Newfoundland station, arrived at St. John’s from England, having sailed from Plymouth on 12 June. At the time of his arrival Montagu was unaware that war with France had been declared on 10 July, but for months there had been much speculation as to the objectives of the French Toulon fleet which had sailed from that port in April under the Comte d’Estaing, and whose destination, North America, had been confirmed at the beginning of June. Montagu was thus little surprised to receive intelligence on his arrival that a squadron of French and American vessels was apparently congregating at St. Pierre and were awaiting only a sail of the line from the Toulon fleet to join them for an attack on Newfoundland. Once news was received at St. John’s of the Comte d’Estaing’s hostile activities in North American waters Montagu therefore wasted little time in acting on his orders dated 2 May ‘to attack, reduce, and take possession of the Islands of St Pierre and Miquelon as soon as he should hear that hostilities had begun’, and accordingly he ordered Commodore John Evans, whose ship had become detached from Vice-Admiral Hon. John Byron’s North America-bound fleet, to undertake that task.

Flying his broad pennant aboard the Romney 50, Captain George Montagu, and with two hundred marines, two field pieces and a party of artillery in company, Evans arrived in the St. Pierre Roads on 14 September after a two-day passage. Captain Montagu, the commander-in-chief’s son, was then sent to inform the French governor, Charles Gabriel Sébastien Sivert, Baron de l’Espérance, that in accordance with the hostile activities of d’Estaing it was necessary to demand the surrender of the islands and their dependencies, and that a response should be received within a half hour.

Thoroughly confounded, de l’Espérance immediately responded that he had no knowledge that war had been declared, and with only thirty-one soldiers and six guns he had little option but to surrender if allowed to do so with the full honours of war. He also sought assurances that the inhabitants would be allowed to carry away their possessions and their fish, that they would not be molested, and that sufficient transports would be provided to ensure their safe evacuation to France. The rendering of three hostages was then given as proof of the French governor’s sincerity.

The next day Evans responded to the effect that the French troops would be permitted to march out of the town of St. Pierre with all the honours of war, and that the inhabitants would be allowed to remain in their houses until proper provision had been allowed for their transportation to France. In return he demanded a full inventory of all the arms, ordnance, ammunition, vessels, fishing boats, fish, oil and other merchandise, and stipulated that they should all be delivered up to the British. He also demanded a full count of the inhabitants and advised that when all of this information had been provided, and once the British colours were flying over St. Pierre, he would return the hostages.

Within the islands there were a sufficient number of vessels including American privateers to embark the governor and his suite, the troops, and all the principal inhabitants of the islands, some nine hundred and thirty-two people in number, in order to return them to France. Evans then despatched the Bonavista to summon ten transports from Halifax which would collect the remaining one thousand-odd inhabitants. Leaving the Surprise and Martin under the command of Captain Robert Linzee to oversee proceedings and to destroy the fishing stages, storehouses, shallops and all the houses, Evans returned to St. Johns on 11 October with the Romney and Pallas, together with a French letter-of-marque and a snow that had come into the St. Pierre Roads after the islands had been taken.

Once news of the capture reached London the authorities wasted little time in announcing their delight at the destruction of what was deemed ‘the constant rendezvous of all the little privateers that infest Newfoundland’ but was also regarded as a valuable nursery for French seamen and a huge benefit to those French merchants in English Quebec who could trade with the West Indies under clearance obtained at St. Pierre. The British fishing industry was even more delighted with the expulsion of the French, for now they could enjoy a monopoly of fishing rights on the Newfoundland Banks, and this was particularly gratifying given that the fifty million people in the largely catholic nations of France, Spain, and Portugal, the Italian states and many of the German states, relied on fish from the Banks to maintain their supply. Less enamoured were those businessmen who had lost out with the concurrent French capture of Dominica in the West Indies, and who damningly declared that the reciprocal occupation of St. Pierre and Miquelon represented the acquisition of nothing more than a few rocks and dwarf spruce trees, and not even one single sheep.