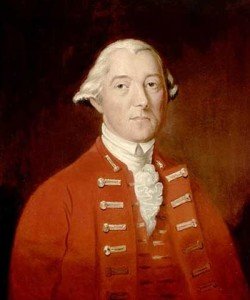 After the British relief of Quebec in May, the American forces under the command of Benedict Arnold retired down towards Lake Champlain with the British Army under Major-General Sir Guy Carleton in hot pursuit. The British intention was twofold: firstly, to advance upon New York from the north, and secondly to cut the belligerent New England states off from the remainder of the rebel supporters. However, arriving at St. John’s, the modern-day St. Jean, on the Richelieu River leading south into the lake, Carleton’s advance came to a halt as there were no passable roads through the hostile countryside, and the Americans held the ascendancy on the strategic waterway of Lake Champlain.

A race to knock down trees and build ships that would contest control of the one hundred- and twenty-five-mile-long lake began, with the enigmatic Arnold, who had captured two schooners during his raid north the previous summer, soon having a further seven vessels in commission. On 3 September he sailed north to the Narrows, about twenty-five miles from St. John’s, in order to view the British preparations, and he was pleased to note that not men-of-war, but land batteries drove him back.

Because shoals and rapids made the River Richelieu un-navigable, Captain Charles Douglas had to superintend the British shipbuilding from Quebec where pre-built vessels brought from England could be dismantled, ferried down the St. Lawrence to Chambly, and transported some twelve miles overland for re-assembly at St. John’s. This in itself was no easy task, the roads being very soft underfoot. The most impressive of these vessels was the square-rigged Inflexible18, a vessel re-built in a mere twenty-eight days, the command of which was given to Lieutenant John Schanck who was particularly skilled in engineering and ship-design. In addition, the schooners Maria 14 and Carleton 12, the ugly but potentially lethal radeau Thunderer 12, and the gondola Loyal Convert 7 were built. A further twenty gunboats carrying anything from a nine-pounder to a twenty-four-pounder cannon were also constructed. Seven hundred seamen manned the little fleet, mostly consisting of drafts from the men of war and volunteers from the transports.

The delay also allowed the rebels to undertake their own ship-building programme at the southern end of the lake, albeit it with scant resources given that skilled shipwrights were at a premium and an outbreak of smallpox had afflicted many of the artificers. Arnold, a man well skilled in marine matters, now had under his command two schooners, a sloop, four galleys and eight gondolas.

By 9 October General Carleton was ready to move, and so was the Navy. Over the next day the British fleet under the command of Commander Thomas Pringle, originally from the armed ship Lord Howe, voyaged down Lake Champlain accompanied by the twenty gunboats. On the night of 10 October, it anchored between the Grand and Long Islands, the latter now known as North Hero, some fifteen miles north of the American fleet. Setting off next morning on a southerly course with a favourable north-east wind, and despite receiving intelligence as to the likely American position, Pringle failed to notice Arnold’s force lying at anchor in a half moon formation behind the steep Valcour Island until he had sailed by. This was typical of the unfortunate misjudgements that would dog his career, and for now it allowed the Americans to retain their advantageous defensive position before the superior British force that had to beat back up from leeward.

Arnold was confident of his dispositions, believing that only a handful of the enemy would be able to prosecute an attack, and that his whole force would be able to fight them off. His faith must have been further enhanced when he realised that the British error also resulted in their having to approach the American positions in a disordered formation. Even so, the bombardment of the gunboats and the longer-range fire of the Inflexible which began shortly after 11 a.m. soon accounted for the American schooner Royal Savage, which with the four galleys had been attempting to fight on the move but was driven on to the southern point of Valcour Island. Men from the Loyal Convert led by Lieutenant Edward Longcraft boarded the grounded vessel and they began firing her guns on behalf of the British cause until half the men were lost and the remainder were forced to rejoin their vessel. Fearing that the American might try to re-board her Lieutenant Starke of the Maria later set the Royal Savage on fire and she blew up. 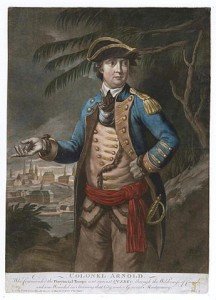 On the British side the Carleton 12 commanded by Lieutenant James Richard Dacres was almost carried by a gust of wind into the American’s semicircular defensive anchorage where she anchored with a spring on her cable. She was soon supported in a mutually ferocious cannonade of round shot and grape from about 12.30 by seventeen of the gunboats which brought up to within point-blank range of the rebels, but not the Maria 14, carrying General Carlton and Captain Pringle, which fell away far to leeward, nor any other of the larger vessels which struggled to beat up into the wind. Behind the British armed vessels, and awaiting any opportunity to board the Americans, were scores of bateaux filled with soldiers, estimated by Arnold as numbering up to a thousand

On board the beleaguered Carleton, Lieutenant Dacres was knocked unconscious, and the command devolved upon a promising midshipman, Edward Pellew. When the spring on her cable was shot away and she swung bow on to the enemy guns Pellew had to scramble over her bowsprit in the face of furious musketry in order to set the jib to windward. Two gunboats then assisted in towing the Carleton away and she was anchored at a safe distance, having suffered eight men killed and six wounded, the equivalent of half her complement, and with two feet of water in her hold.

Too late in the day the Inflexible was able to get within pistol range of the Americans, but after five enormous broadsides that did much to silence the American line she was obliged to haul off at nightfall. All the while Pringle’s ship failed to enter the action, in stark contrast to Arnold’s Congress, which was in the thick of it, her guns personally directed by the American commander. In the action the Americans lost a gondola in addition to the Royal Savage and the British had an artillery boat blow up when a shot struck her magazine.

Over confidence, allied to Pringle’s poor command, now affected the judgement of the superior British as night came on. Having anchored in a supposedly dominant position in blockade of the rebels, and with a mixed force of Indians and troops sent ashore to prevent an escape across land, they assumed that the morning would bring about Arnold’s surrender. However, a descending fog enabled Arnold to spirit his ships out of their anchorage at 7p.m, and sneaking through a mile-wide gap under muffled oars the Americans headed south unseen for Crown Point. Next day they anchored eight miles up the lake at Schuyler’s Island where repairs were effected and two badly damaged gondolas destroyed. In the face of a southerly breeze, they then recommended their retreat at about 2 p.m.

Towards nightfall on the 12th word of the new American position was brought to an incandescent General Carleton, who earlier in the day had charged off on a fruitless search for his enemy before returning to Valcour Island. The British set off in chase that evening and come the morning were five miles from the American flotilla which was near Willsborough within twenty-eight miles of Crown Point. Now the winds began to favour the British, for whilst Arnold’s fleet continued to struggle against a southerly breeze, Pringle’s ship suddenly benefitted from a north-easterly breeze that brought them down on the rebels near Spit Rock. 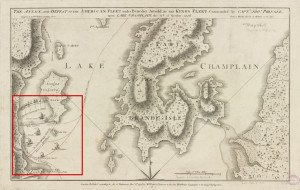 The Inflexible and two schooners were well in the fore of the British fleet, and they brought the rear of Arnold’s depleted force, consisting of the galleys Congress and Washington, to action in the upper narrows where the lake was no more than three miles wide. A running engagement through the narrow waters of up to two and half-hours followed in bad weather and the already damaged Washington was soon obliged to strike as more of the British ships got into the fight. Having got to within ten miles of Crown Point but seeing no chance of escape by water Arnold ran his galley and four consorts into a creek the next day and set them afire before escaping overland through woods and Indians to Crown Point.

American losses in the three days action numbered eighty, twice as many as the British, and the rebel flotilla on Lake Champlain was obliterated with ten of the fifteen vessels being lost. Their sacrifice had been worthwhile however, as they had delayed the British advance for that season. Although he considered the victory to be significant, Carleton was forced to withdraw his force to their winter quarters at St. Johns, and it was not until the following year that Lieutenant-General John Burgoyne took up the offensive, with disastrous results in his surrender at Saratoga.

A postscript to the affair occurred in the following year, when having read Captain Pringle’s account of the action in the London Gazette, Lieutenants John Schanck, John Starke and Edward Longcroft wrote to their erstwhile commander complaining of his acceptance of the glory for himself and Lieutenant Dacres. Going so far as to opine that no other individual had played so small a part in the squadron’s preparation and action, they blatantly stated that he wanted courage and accused him of even failing to obtain details of casualties so that the next of kin could be contacted. Again, it was not to be the first time in a long career that Pringle would be found wanting.

Meanwhile, for their part in the campaign, Carleton was created a KB and Douglas a baronet, while Dacres was given the honours of carrying the despatches, being rewarded with promotion to commander.