Throughout the month of January 1793, as it became apparent that the long-expected war with the revolutionary National Convention of France was imminent, His Majesty’s Commissioners for executing the office of the High-Admiral of Great Britain and Ireland, namely the First Lord of the Admiralty, Lord Chatham, supported by the first sea lord, Vice-Admiral Lord Hood, and the board members, Lord Arden, Hon. John Townshend, Captain Alan Gardner, Charles Small Pybus, and John Smith, began formulating plans for the Navy’s role in the forthcoming conflict. 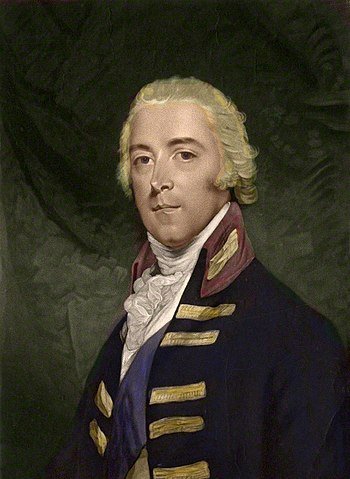 One of their first decisions was to ensure that there would be enough men of ability, vigour, and dynamism within the ranks of the flag officers to support the venerable, wise and experienced admirals who would command the various stations, and so a promotion of captains to rear-admiral was made on 1 February, and in particular it was extended to include the highly regarded junior sea lord, Captain Gardner. Amongst the other beneficiaries of this advancement who would soon be called to arms were John MacBride, John Gell and Sir Hyde Parker, whilst Hon. William Cornwallis, who at the time was commanding the East Indies station, was also promoted. On the same day, Admiral Lord Howe was appointed the commander-in-chief of the Channel Fleet at the instigation of the King, and the baggage belonging to the First Sea Lord, Vice-Admiral Lord Hood, was despatched to Portsmouth from his residence at the Admiralty amid rumours that he was about to sail for the West Indies with a powerful squadron that would protect those valuable islands from any French threat.

On 2 February the government received the news that the French had placed an embargo on the seventy British vessels within their ports, and as preparations for war began in earnest, orders were received at Portsmouth from the Admiralty on the 6th to despatch a squadron under the command of Commodore John Colpoys of the Hannibal 74, and otherwise consisting of the Hector 74, Captain George Montagu, Orion 74, Captain John Thomas Duckworth, and Juno 32, Captain Samuel Hood, to the Channel Islands to prevent any French designs upon them. Concurrently, an officer who more than any other was to make his name in the conflict with France was also summoned to war, for after five years of unemployment the virtually unknown Captain Horatio Nelson left his father’s home in Norfolk to join the Agamemnon 64, which was fitting out at Chatham.

On 8 February confirmation was received by the government that the French had declared war a week earlier, and that night a meeting of the Board of Admiralty both ordered twenty sail of the line and a similar number of frigates to be put into commission, and under great security despatched press warrants to the major ports of the kingdom so that the draconian but necessary process of manning the men-of-war could begin. Further Admiralty board meetings took place over the next few days as the press gangs swept into action on the River Thames, and these signed off the scores of commissions that would see the officers appointed to the various men of war. At the same time orders were despatched for a number of frigates to put out from Plymouth and Portsmouth to patrol the Channel in protection of the merchant marine, and it was also announced that from 10 February the shipwrights and artificers at Portsmouth had begun a punishing daily schedule of working until 10 o’clock at night.

One of the first appointments announced in the week following the commencement of hostilities was that of Rear-Admiral John MacBride to command in the Downs, and although it was not until 6 March that he raised his flag aboard the Alfred 74, Captain John Bazely, he wasted little time in making his presence felt by delivering several rousing speeches to the local gentry at Deal, the local town servicing that station. The reality of war soon revealed itself when MacBride had occasion to write to the Admiralty on 13 February seeking clarification as to how he should handle some French prisoners who had fallen into his hands, and he also directed operations from the beach when a lug-sail boat from Calais approached the town one night and boarded an ordnance sloop near the Hoop and Griffin tavern – fortunately two Deal boats recovered the sloop with the crews armed with nothing but stretchers, whilst the French lug-sail boat was also carried. Less happily MacBride also suffered negatively from the fortune of war when part of his furniture was lost with the capture by a Calais privateer of the merchant vessel Pearl from Plymouth.

On 19 February the Admiralty issued an edict ordering all sea officers absent from the kingdom to return home within six months, and at the same time it requested its unemployed officers to forward their contact details if they wished to be considered for a commission. As the threat of invasion from France was minimal at this time the commissioning of the Channel fleet was treated with secondary importance to that of ensuring that all the foreign stations were protected, and with the board’s plans beginning to coalesce it was confirmed that rather than going out to the West Indies Lord Hood would now become the commander-in-chief of the Mediterranean station, and that he would be given a special commission to allow him to take any foreign allied ships under his command. Another key appointment was made on 22 February when the pugnacious and recently promoted Rear-Admiral Gardner was named as the commander-in-chief of the Leeward Islands station, and after several delays he would eventually set sail from St. Helens on 26 March with seven sail of the line and two frigates.

With the press gangs hunting for seamen throughout February the many ships laid up in ordinary began to receive the necessary crews, and as they reached a satisfactory complement so they were added to the list of those vessels already in commission. As early as 30 January the huge flagships Queen Charlotte 100 and Royal Sovereign 100 had been ordered to fit out at Portsmouth and Plymouth respectively, and the process of bringing ships out of mothballs continued throughout the early spring. At Portsmouth Rear-Admiral Sir Hyde Parker supervised the fitting out of the Mediterranean fleet pending the arrival of Lord Hood, and on 5 April he was able to despatch Rear-Admiral John Gell, who himself had lost thirty cases of books in the French capture of the Pearl, from St. Helens with six sail of the line and a frigate in escort of an East India convoy of ten ships which he would see to a safe latitude before sailing to join the Mediterranean fleet. 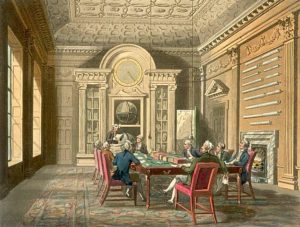 A contemporary image of the Board of Admiralty

Back at the Admiralty, the Board continued making their senior appointments, and on 10 April the venerable Admiral Sir Peter Parker was installed as the commander-in-chief at Portsmouth. A far less inspired and inappropriate decision was to order the excellent Captain Richard Keats of the frigate Niger 32 to fit out the London 98 at Plymouth as the flagship designate for the totally unsuitable 27-year-old Duke of Clarence, who had received a fast-track promotion to admiral for the sole reason that he was the King’s son, and who it was stated would command the rear division of the Channel Fleet. Fortunately, common sense prevailed and the Duke was eventually persuaded to remain at home.

By 6 May sixty-five sail of the line had been brought into commission in opposition to the thirty-nine sail of the line the French had at Brest, the ten at Lorient, twelve at Rochefort and twenty-four at Toulon, although at this stage it was not known how many of the enemy vessels were immediately ready for sea. That day Vice-Admiral Lord Hood hoisted his flag at Portsmouth aboard the Victory 100, Captain John Knight, and being in a position to commandeer a number of men who had volunteered for Channel Fleet service he was able to despatch another squadron to the Mediterranean on 11 May consisting of five sail of the line and two frigates under Vice-Admiral William Hotham. Eleven days later, Hood too got away with the East India and Mediterranean trade under convoy.

Meanwhile Admiral Lord Howe had set off from his house in Grafton Street, London, on 13 May and sixteen days later he hoisted his flag aboard the Queen Charlotte 100, Captain Hugh Cloberry Christian, as the commander-in-chief of the Channel fleet. On 12 June Vice-Admiral Sir Alexander Hood received orders to proceed to Portsmouth and raise his flag aboard the Royal George100, Captain William Domett, as Howe’s second-in-command, and on 3 July Howe was given orders to proceed to sea.

Ironically, and reflecting the personal misfortunes suffered by Rear-Admiral MacBride and Gell, Lord Howe also lost a great deal of his property after the wagon carrying it to Portsmouth was hijacked near Guildford by seven armed men. In the event, with French men-of-war and merchantmen to sweep off the seas, it would not take long for the three officers to counter the pecuniary losses they suffered in replacing their belongings