At 9.30 on the misty morning of 24 October, the twelve-pounder frigate Thames 32, Captain James Cotes, cruising on a west south-westerly wind in the north-western reaches of the Bay of Biscay, about two hundred and fifty miles due west of Nantes, identified a sail in the south. This would prove to be the larger eighteen-pounder French frigate Uranie 38, Captain Jean François Tartu, which had recently captured the Spanish brig Alcoudia 16. As the mists closed in the two frigates became invisible to each other, but at 10.15 the French vessel was discovered bearing down upon the Thames, and fifteen minutes later she fired a gun to windward and hoisted her national colours.

The Thames was an old frigate that had first been commissioned thirty-five years earlier at the time of the Seven Years War. During her first couple of year’s employment she had fought two glorious actions with the French under her captain, Stephen Colby, but her subsequent service under up to ten different commanding officers had not given her any further opportunity for distinction. Her latest commander, Captain James Cotes, was an experienced officer of about 40 years of age who had been posted captain eleven years previously in the latter stages of the American War of Revolution, but had seen little service during the peace. Her armament consisted of twenty-six 12-pounder cannon on her gun deck and six 6-pounders on her quarterdeck and forecastle, equating to a broadside weight of metal of 174 pounds. At the time of her falling in with the Uranie she carried a crew of one hundred and eighty-four men and boys.

Her imminent opponent, the Uranie, had only been commissioned in 1791. She carried twenty-eight French 18-pounder cannon on her gun deck and twelve French 8-pounders on her quarterdeck and forecastle in addition to six 36-pounder carronades, her broadside weight of metal being calculated at about 400 pounds, or over twice that of the Thames. Similarly she was almost twice as big in tonnage, whilst her crew of some three hundred and twenty men far outnumbered her British opponent. 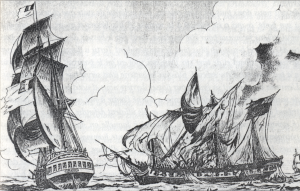 Approaching each other on opposite tacks like a pair of medieval jousters, the Uranie opened fire on the Thames with her bow guns and then unleashed a complete broadside before wearing ship, whereupon a general action commenced. The balance of the contest thereafter remained mutual until the Uranie managed to get under the Thames’ stern and pour in three raking broadsides, whereupon she attempted a boarding manoeuvre with the intention of sending her crew to fight their way over the British frigate’s starboard quarter. However, such was the double-shotted broadside in riposte from half a dozen of the Thames’ main deck cannon that at about 2.20 the French decided to throw over the fight and haul away to the south, their captain being one of only a small number of casualties.

The butcher’s bill on the Thames numbered eleven men killed and twenty-three wounded, the number bearing testimony to the musketry practised by the Uranie’s sharpshooters. Cotes’ command had also suffered damage to an equally high proportion, with all her masts and bowsprit being riddled with shot, all the stays shot away, her rigging torn to shreds, several yards hanging loose, the gangways shattered, and three guns dismounted. Any pursuit of the Uranie, which had hove-to a couple of miles away to her attend to her repairs, was therefore out of the question, and so Captain Cotes put his ship before the freshening wind to prevent the desperately wounded masts from toppling over, and he did his best to repair the damage to the Thames.

By 4 p.m. the Uranie was no longer in sight, having retired towards Rochefort, but at that time four sail were seen coming up under British colours. Any relief on behalf of the Thames soon turned to despair as these colours were run down and the French national flag hoisted in their place. The strangers were the frigates Carmagnole 40, Résolue 36, and Sémillante 36, together with the brig Espiègle 16, the squadron being commanded by Captain Zacharie Jacques Théodore Allemand. As soon as the Carmagnole manoeuvred under the Thames’ stern and raked her Cotes decided that resistance was pointless; indeed such was his frigate’s devastated condition that when summoned on board the enemy after striking his colours Captain Cotes could not claim an undamaged boat to carry him there, and whilst he awaited a boat to be sent to him he ensured that his dispatches and papers were thrown over the side. For his part Allemand, after establishing the desperate state of the Thames, was livid that the Uranie had not finished her off.

The Thames was towed into Brest by the Carmagnole the next day, where having been separated from their surgeon the wounded were left unattended for three days. Such was the barbarity of the revolutionary French navy, whose sailors also pillaged the officers and men of the Thames, although Allemand himself did do his best to make the privations of the former less arduous. The French also placed an embargo on any homeward-bound correspondence with the result that it was eighteen months before Cotes’ letter to the Admiralty, dated 9 April 1795 from Givors near Lyons in southern France, reached London. Weeks later he was exchanged, and on 30 May he arrived at Dover aboard an American brig from Calais. A fortnight afterwards he faced a court-martial on board the Royal William 100 at Portsmouth which, after just one hour’s deliberation, honourably acquitted him of blame for the loss of the Thames.

Captain Cotes was never to command another ship at sea, although he did return to France a couple of years later as an agent for prisoners. His erstwhile command, the Thames, was taken into the French navy as the Tamise but within three years was back under British colours following her recapture in the Channel by the Santa Margaretta 36, Captain Thomas Byam Martin. Another seven years service followed without incident before she was broken up at Woolwich in 1803. The Uranie, which had been renamed the Tartu in honour of her captain, also did not escape British hands for long, for she was captured off Ireland in January 1797 by the Polyphemus, Captain George Lumsdaine, and would spend ten uneventful years in British service prior to being laid up.