Born to a prominent family, Captain Charles Morice Pole had risen quickly in the service with his early promotions taking place in the East Indies under the patronage of Commodores Sir Edward Hughes and Sir Edward Vernon, and his posting to captain had resulted from his return to England with the latter s despatches. A stint in command of Vice-Admiral George Darby s Channel fleet flagship had followed, and he had then been given the frigate Hussar 28, only to lose her in the Hell Gates off New York through a navigational error by his pilot. This misfortune had affected his progression not one iota, and following his return home with Vice-Admiral Marriot Arbuthnot s despatches he had been appointed to the newly commissioned frigate Success 32 in the spring of 1781. The unassuming, dutiful, popular Pole was now eager to prove that he was worthy of the favoured command that his bloodline, rather than achievements, had earned him. 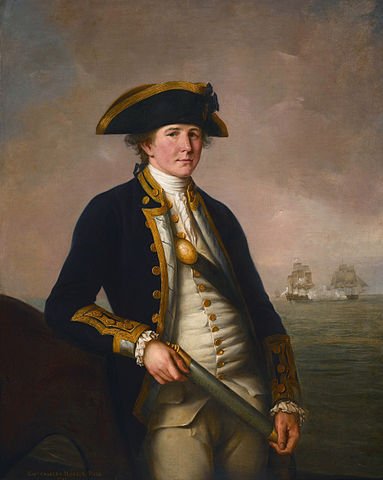 The Success had been built at Liverpool and launched in April 1781. She was a twelve-pounder frigate of the Amazon class with a nominal crew of two hundred and twenty men, and an armament of twenty-six 12-pounders on her gun deck, six 6-pounders on her quarterdeck and forecastle, and six 18-pounder carronades. Apart from capturing a French privateer in the Channel during the autumn of 1781, she had seen little action prior to Pole receiving orders to escort the private storeship Vernon 22, Commander John Falconer, and her cargo of gunboats and soldiers out to Gibraltar at the beginning of March 1782.

With the rock fortress under constant siege by the Spanish there was every possibility of running into an enemy, and sure enough, at daylight on 16 March when the frigate and her charge were some sixty miles to the south-west of Cape Spartel, a large poop-decked ship was seen in the hazy distance. The stranger was on an approaching course, being close-hauled on the larboard tack with the fresh wind in the south-west. Pole s initial impression, magnified by the large poop deck, was that he had run into a Spanish ship of the line, and so he wore on to the starboard tack to make sail away whilst the stranger tacked and set off in pursuit. Around 2.30 in the afternoon, the Success was obliged to reduce sail to allow the Vernon to pass ahead of her, and Pole then brought-to in the hope that the stranger would do the same and thereby give the valuable storeship the opportunity to make good her escape.

With the haze clearing it now became apparent that rather than a sail of the line, their pursuer was a large frigate. She was in fact the twenty-five year old 12-pounder frigate Santa Catalina 34, commanded by Captain Don Miguel Tacon, who was the senior Spanish officer in the Straits. Carrying three hundred men, and mounting twenty-six 12-pounders on her main deck and six 8-pounders on her quarterdeck, she was the biggest of her class afloat, and having been given particular intelligence pertaining to the Success and the Vernon she had been cruising to the west of the Straits for the previous three weeks on the look-out for them. Indeed, she had already seen the two British ships several times over the preceding days when in company with the San Julian 64 and three other Spanish vessels, but she had been unable to mount any successful chase. Having parted from her consorts, she had been cruising alone for the previous two days.

At 5 p.m. the Santa Catalina run up her colours and Don Miguel s commodore s pennant, at which time she also fired a gun. Pole concluded that the most effective way of protecting the Vernon was to attack the Spaniard, and after initially hoisting Dutch colours he then ran up the British flag and prepared for action.

By 6 p.m. the Santa Catalina was in range, so Pole wore ship and bore down upon the Spanish frigate s lee bow, giving every appearance of crossing her forefoot to engage from leeward. But then he suddenly hauled up, and after firing a full raking broadside into her larboard bow at half-pistol range, he shot down her unprepared windward side. Pole s clever manoeuvre and raking broadside had clearly thrown the enemy into a blind funk, and the Spanish crew panicked around their larboard guns in such confusion that they fired them blindly into the sea. 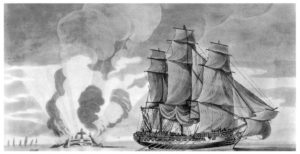 The Success leaves the burning Santa Catalina, whilst an unknown squadron appears on the horizon

Wearing ship once more, the Success now assailed the Santa Catalina remorselessly on her lee quarter at close range, being joined at a safer distance by the Vernon, which carried twenty-two 6-pounder cannon and had a crew of thirty-three men plus one hundred and twelve soldiers aboard. Soon the Spanish mizzen-mast crashed down, her rigging was torn to shreds, and she began taking in water through so many shot holes that Pole would later describe her as leaking like a sieve .

At 8.20 the Santa Catalina struck her colours, and Lieutenant Oakley went aboard to receive the surrender and attempt to make good repairs, a task which became more telling when her mainmast fell shortly afterwards. The Spanish had suffered casualties of twenty-five men killed and eight wounded in return for one killed and four wounded aboard the Success, the latter figure including Pole s esteemed boatswain who had lost an arm. One man was also wounded aboard the Vernon. Don Miguel would later claim with some justification that he had been badly let down by his crew, but Pole s tactics and execution of them had been of the first order, and the victorious commander had annihilated his opponent to such an extent that he now harboured little hope of salvaging her.

Over the next two days the men of the Success attempted to repair the shot holes in the Santa Catalina s hull, and to assemble a jury rig that would replace her fallen main and mizzen masts. This task had almost been completed when on the morning of the 18th six sail were seen on the horizon, two of which were clearly frigates. As the Santa Catalina had so recently parted from her consorts, Pole assumed that the strangers could only be Spanish, and as his men had already thwarted an attempt to seize his ship by the two hundred and eighty-six prisoners he had aboard, he could take no further chances. After ordering the firing of the Santa Catalina she blew up within fifteen minutes, whereupon he set sail on the south-easterly wind with the Vernon, intending to make for Madeira where desperately needed supplies could be obtained.

As it transpired the six strange sail were almost certainly the frigates Cerberus 28, Captain Robert Man, and Apollo 32, Captain Charles Powell Hamilton, which were in convoy of four troop transports bound for Gibraltar. Should he have thus felt dismayed at the apparently unnecessary destruction of his prize, Pole was at least somewhat compensated by Lieutenant Oakley s assertion that the damaged Santa Catalina could never have survived a subsequent gale of wind. During 24 March all eight vessels made it into beleaguered Gibraltar, and by the 30th the Success was back at Spithead from where Pole wrote to the Admiralty advising them of the engagement.

The Success would go on to have a long career in the navy, seeing service right through until the end of the wars in 1815, when she was converted into a powder hulk at Halifax, Nova Scotia, prior to being broken up there in 1820. The defeat of the Santa Catalina was undoubtedly the high point of her career, for as well as suffering the tyranny of Captains Hugh Pigot and Philip Wilkinson in Jamaican waters during the 1790 s, she also briefly served under French colours after her capture by Rear-Admiral Honor Ganteaume s squadron in the Mediterranean during February 1801. Fortunately she was then retaken seven months later by a frigate squadron led by Captain George Cockburn.