In the spring of 1782, the thirty-five year-old two-decked British fifth rate Rainbow 44 was fitted out at Chatham with a battery of carronades consisting of twenty 68-pounders on her lower deck, twenty-two 42-pounders on her main-deck, and six 32-pounders on her quarterdeck and forecastle. The idea of experimenting with the fitting of carronades to such a vessel had been promoted by Commodore Hon. Keith Stewart, who during the previous year had suggested that his pennant ship, the Berwick 74, be furnished with four carronades. It was also Commodore Stewart who recommended Captain Henry Trollope as an officer with the technical knowledge of gunnery to make a success of the experiment.

The Rainbow had originally been launched in 1747 and had seen service in three wars under such auspicious commanders as George Brydges Rodney, Charles Fielding, and Sir George Collier. Her most notable achievement prior to her refit at Chatham had been the recapture of the British frigate Fox 28 on 7 July 1777, and the defeat of the Fox’ s captor, the American frigate Hancock 34, a day later. Her new commander, the 26-year-old Henry Trollope, had served with distinction in command of the cutter Kite for three years before being posted to the experimental Myrmidon 22 during the summer of 1781. In joining the Rainbow, he would take command of a vessel that boasted a broadside weight of metal totalling 1,238 pounds, and would be far more powerful than any other ship on the sea bar a sail of the line. 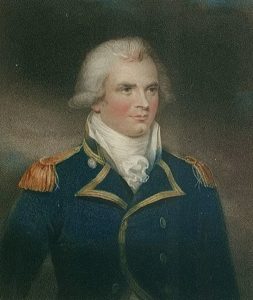 It was not until the end of August 1782 that Trollope was able to complete the manning of his ship, and he was further delayed whilst sailing to join Commodore John Elliot at Plymouth when some heavy shot broke loose and smashed through the lockers during a stormy passage down the Channel. When he did arrive on 1 September it was to see Elliot sailing in the opposite direction towards his cruising ground off St. Malo, but in his typical energetic fashion Trollope managed to persuade the Plymouth shipwrights to repair his ship overnight, and he was able to leave the Devonshire port on 2 September.

At 4 a.m. on 4 September, having yet to fall in with Commodore Elliot, the Rainbow was half a dozen miles north of the Ĭle de Batz near the northern Brittany coast when she discovered a sail in the westward and gave chase. Soon further sails were discovered close into the coast, and it would transpire that these belonged to a convoy which was bound from St. Malo to Brest under the escort of the brand-new French frigate Hébé 38, Captain Joseph Pierre de Vigny. In fact, the French frigate, whose twenty-eight 18-pounders and twelve 8-pounders threw a broadside that was barely a quarter to that of the Rainbow, was spending only her second day at sea.

At 6 a.m. the Rainbow was able to identify the Hébé as a frigate and forsaking the profitable course of pursuing the convoy Trollope immediately gave chase to the man of war. An hour later he was able to open up with the Rainbow’s forecastle 32-pounder carronades to which the Hébé responded thirty minutes later by hoisting her own colours and firing her stern chasers. The pursuit then progressed for another hour or so until at 8.30, to the British crew’s utter amazement, the French ship luffed up, discharged a single broadside at pistol shot range, and struck her colours.

The reason for Captain de Vigny’s abysmal surrender soon became evident, for upon being brought aboard the Rainbow his despair at finding her to be a mere fifth-rate vessel with a crew one hundred men short of his own complement of three hundred and sixty men was so profound that he was apparently almost moved to tears. It transpired that the impact of the Rainbow’s bow-chaser carronades had caused an inordinate amount of consternation upon the French frigate, as well as blasting away her wheel, damaging her foremast, and killing her second captain, Yves-Gabriel Calloët de Lanidy. Having examined one of the balls de Vigny had surmised that it could have only been fired by a ship of the line, an assumption that was unsurprising, given the fact that the Rainbow was of course a two-decked vessel. Convinced that he was being run down by much larger opponent, de Vigny had given his convoy the opportunity to escape into Morlaix before submitting to what he deemed the inevitable.

The Rainbow lost one man killed in the action whilst the Hébé suffered casualties of five men killed and several wounded, including de Vigny with minor splinter injuries. By 7 September the Rainbow was back at Plymouth, and Trollope was writing to the port admiral, Vice-Admiral Lord Shuldham, describing his easy capture. The Hébé was bought into the navy and enjoyed a long thirty-year career under British colours, being known as the Blonde from 1805. It was notable that the command of this ‘plum’ frigate was immediately given to the nephew of the first lord of the Admiralty, Captain George Keppel, and such was her desirability that she remained in employment throughout the years immediately following the peace of 1783.

de Vigny paid for his mistake by being dismissed the French navy following a lengthy court martial at Morlaix and sentenced to fifteen years imprisonment at the Château de Ham in Picardy, although he was released in 1785 following the intervention of Admirals Louis-Urbain de Bouënic, the Comte de Guichen, and Comte Louis Guillouet d’Orvilliers.