On 21 May the newly launched American frigate Hancock 34, Commodore John Manley, and her consort the Boston 24, Captain Henry McNeill, had put to sea from Boston with eight privateers to cruise against British shipping on the Newfoundland Banks. This force had not been long at sea before the privateers decided to go their own way; however, the Hancock and Boston soon enjoyed some success with the seizure of a brig out of a convoy, and on 7 June they had the immense gratification of capturing the frigate Fox 28, Captain Patrick Fotheringham, off the Newfoundland Banks. Some days were spent in repairing both the Hancock and the Fox, and a scratch crew was placed aboard the latter under the command of Lieutenant Stephen Hill. All three vessels then set sail for Boston, as Manley had decided to forsake his cruise and return to the colonial stronghold where the capture of the Fox could be heralded, and a proper crew allotted to her.

Whilst undertaking their westerly voyage back to Boston, the three vessels were delayed by calm weather, thick fogs and several other occurrences, not least a dispute that arose between the two captains after they had almost ran afoul of each other on the night of 26 June, an incident that led to some condemnatory correspondence. At 5 a.m. on 6 July, in clear weather and with a fresh breeze, the Americans sighted land which they correctly assumed to be somewhere between Halifax and Cape Sable on the southern coast of Nova Scotia, and an hour later they captured a sloop laden with coal from Louisbourg, which the Hancock took in tow. 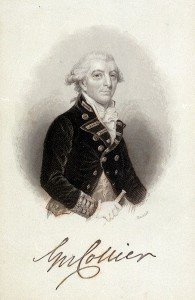 Meanwhile, unaware that the Americans were off the coast, and having no knowledge of the Fox’s capture, the senior officer at Nova Scotia, Captain Sir George Collier of the Rainbow 44, had departed Halifax at 3 a.m. that morning to venture on a cruise in the company of the brig Victor 18, Lieutenant Michael Hyndman. Collier too, somewhat providentially, assumed a westerly course, and at 4.30 that afternoon, with the weather still clear but the breeze lighter, the Rainbow sighted three sail some twenty miles to the east of Cape Sable on the south-western tip of Nova Scotia. Collier immediately ordered a pursuit, and as the Victor was some distance in arrears he signalled Mr Hyndman to make more sail and remain in company.

By sunset that evening, being appreciably closer, and with the wind at west north-west and the Rainbow on the starboard tack, Collier was able to identify the strangers as large vessels which by their south-westerly course were apparently bound for New England. He now harboured little doubt that the strangers were part of the American squadron which had earlier put to sea from Boston, and despite the Rainbow and Victor being spotted by the Americans at about 6 p.m. they managed to remain in contact overnight, not least because the Boston and Fox were required to take in sail to keep company with the Hancock and her prize sloop.

At dawn on the 7th, being about forty miles south of Sable Island, the strangers appeared on the Rainbow’s weather bow some five to six miles distant in the west, and it could now be seen that they had in company a fourth vessel. At this stage the Victor was no longer in sight from the Rainbow’s masthead, but as Collier had little doubt as to the identity of the strangers he maintained his chase. For his part, Commodore Manley suspected that the vessel in pursuit of him was the ship of the line Raisonnable 64, and so he set fire to the prize sloop and ordered his squadron into a line of battle, hoisting as much sail as they could evidently spread.

Not long after 6 a.m. a strange sail was seen on the Rainbow’s lee bow standing towards her from the south-east. Failing to answer the recognition signals, this vessel fired two guns to leeward and hoisted the British ensign as she sailed past the American line before crossing the Rainbow at about four miles distant and putting about to settle on a course in the wake of the rebels. Notwithstanding the new stranger’s colours, Collier suspected that she too was an American frigate and he did not give over his pursuit, even though by now he must have doubted why the apparently superior enemy was not putting about to chase him.

The new stranger was in fact the British frigate Flora 32, Captain John Brisbane, serving under the orders of Vice-Admiral Lord Howe at New York. Her presence was not unsurprising, for being aware that he had not the resources to deal with the threat posed by the American privateers which outnumbered his own squadron, the commander-in-chief at Newfoundland, Vice-Admiral John Montagu, had earlier written to Lord Howe asking for two frigates to assist in the protection of the fisheries. 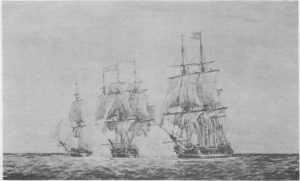 The Fox, Boston and Hancock.

Just before 11 a.m., and much to Collier’s surprise, the rear-most American vessel, the Boston, began to fire her stern-chasers at the rapidly closing new stranger, and in the exchange with the Flora’s bow-chasers that followed McNeill’s smaller vessel came off the worst. She and the Hancock then hauled their wind, but the Fox did not and instead appeared to change course several times as if unsure how to proceed. Captain Brisbane passed somewhat abreast and to leeward of the Boston and Hancock, and after trading broadsides set off after the Fox, exchanging fire with her. With Brisbane’s command easily running her down the Fox got caught in her stays whilst attempting to tack, whereupon the Flora raked her before the prize frigate wore and set off after the Boston and Hancock to regain their company, exchanging further broadsides with Brisbane’s frigate as she did so.

Maintaining her course, the Rainbow opened fire as the Fox passed her in the hope of bringing down a mast, but her shot failed to damage anything of significance. Collier then tacked in pursuit of the Fox, but shortly afterwards the Hancock put about and ran past the Rainbow just out of range to windward. At this point one of Collier’s officers, a recent prisoner of the rebels at Boston, confirmed that she was indeed the Hancock. With the Fox appearing to easily out-sail the Rainbow, and all three enemy vessels apparently intent on escaping by pursuing different courses, Collier realised that to capture all of them was an improbability, and so he resolved to put about and tackle the largest vessel, this being the Hancock. Whilst she was in stays, at about 2 p.m. the Flora, having wore ship, came rushing past in pursuit of the Fox.

The Hancock initially lived up to her expectations of being a fine sailing vessel by extending her lead over the Rainbow as the two ships raced across the ocean on a south-westerly course, but throughout an afternoon and night interrupted by foggy interludes Collier’s command began to make up the leeway once Manley erroneously shifted his water casks in an effort to improve the Hancock’s trim. As dusk began to fall the Hancock changed course, but when the darkness closed in the Rainbow was close enough to ensure that contact could be retained through the hours of darkness by the use of a night-glass.

Not long after dawn the Victor surprisingly appeared to leeward of the Hancock, and in firing as she passed she brought down a man at the American’s wheel. The sloop’s ill-sailing prevented her from taking any further part in the action, but at 4 a.m. Collier was able to bring the Hancock within range of his bow-chasers, and he even took the opportunity to yaw and get off several broadsides loaded with round shot and grape which did some damage aloft to the rebel frigate. At about 8.30 a.m. the Rainbow ranged up alongside the Hancock and Collier demanded Manley’s immediate surrender in return for quarter. A sudden gust of wind gave the American hopes of escaping, but after an exchange of broadsides the Rainbow brought her to again, and following a brief action in which the Hancock’s foremast was disabled the rebel’s colours were struck shortly after 8.30 following a thirty-nine hour chase.

The Rainbow’s first lieutenant, Thomas Haynes, went aboard the Hancock to take possession of what would prove to be a very fine new frigate, and to shake hands with Captain Patrick Fotheringham, late of the Fox, who with forty of his men was still a prisoner aboard the American vessel. Upon being brought aboard the Rainbow, Manley could not hide his dismay at having been taken by a 44-gun vessel, rather than the 64-gun vessel he had supposed her to be. Had he kept in company with the Boston and Fox he might at least have been able to put up a decent fight, particularly as the Victor, having fallen behind, had been unable to get into action and had allowed the disabled Boston to go free. His demeanour could best be summed up with his reply to Collier’s polite observation that in having the rim of his hat shot away the American had suffered a narrow escape. ‘I wish to God it had been my head!’ he cried.

In the meantime, and following a long chase to the north that had caused her sailing master to caution Captain Brisbane that they were in danger of leaving their station, the Flora had come up with the Fox. Despite damage to her fore-topmast from the prize frigate’s stern chasers the British frigate had been able to respond effectively with her own bow-chasers, and once she got alongside there was no option but for the small prize crew aboard the Fox to surrender at 4.30 p.m.

The Boston, which had only suffered one man killed and another wounded, made good her escape, but there would be some dismay at her failure to provide any meaningful support to her consorts. Perhaps it was no surprise that the two American commanders had parted company so quickly, for they were known to be on exceedingly bad terms with one another. After loitering at the mouth of the Sheepscott River, Maine, for several weeks Captain McNeill of the Boston faced a court-martial in the following June on charges of not assisting his commodore. He was found guilty, and dismissed the service.

Independently the British frigates and their prizes returned to Halifax, with the Flora and Fox arriving a day or two before Collier, who came in on the 11th after deciding to return immediately when he had found that the prisoners taken out of the Hancock were of a similar number to his crew. Manley’s pendant was packaged off to the Earl of Sandwich, and on 22nd August the first lord of the Admiralty joyfully passed it on to the King. There was some surprise in British circles that the Hancock had been caught, for as the experienced Collier explained in delighted terms to his superior she was deemed to be a swift sailor. The summarisation was that Manley had handled her poorly. On the American side Manley and his captain, Daniel Watters, were sent as prisoners aboard the frigate Siren 28, Captain Tobias Furneaux, to New York from where they were eventually exchanged in the following April.

The Hancock was bought into the Navy, being renamed the Iris, and placed in the capable hands of Captain Samuel Clayton. She would serve British colours for the next four years before being cornered in Chesapeake Bay by the French fleet and commissioned into their service. Her fate was to be burned at Toulon following the British evacuation in December 1793. The Fox was refitted under the orders of Captain Fotheringham and manned for a return voyage to England where he would face a court-martial for her original loss. Unfortunately, she was not to remain long in the British service, for she was captured by the French Junon 32 off Ushant on 10 September 1778 when commanded by Captain Hon. Thomas Windsor.