Captain George Farmer of the Quebec 32 had enjoyed a profitable year cruising against the French commerce when, in the early autumn of 1779, he was forced into Portsmouth for a refit. More pertinently he also had to rearm his vessel, for his twelve-pounder cannon had recently been jettisoned to facilitate her re-floating after she had gone aground whilst chasing a large French convoy in the stormy waters around Ushant.

As the year-old war with France had thoroughly drained the navy’s resources, supplies at Portsmouth were scarce and Farmer was unable to replace his lost twelve-pounders with anything other than nine-pounders. After returning to her station off Guernsey in company with the Rambler 10, Lieutenant Rupert George, the Quebec was thus somewhat at a disadvantage when at dawn on 6 October she fell in with the eighteen-pounder French frigate Surveillante 32 off Ushant. This vessel was commanded by a flamboyant forty-year-old Breton, Lieutenant Charles Louis Du Couëdic de Kergoualer, whose priorities had been firmly nailed to his mast with a declaration to the French King that his ship would either be his chariot of triumph or his tomb. In company with the Surveillante was the cutter Expédition 10, Lieutenant Pierre de Roquefeuil-Monpeyroux. 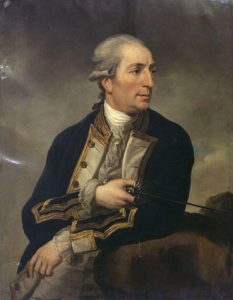 What followed would be one of the bloodiest single ship encounters in the annals of the British and French navies.

The Quebec had been commissioned almost twenty years previously and had seen sporadic service prior to being refitted and given a copper bottom at Sheerness in the early months of 1779. With her reduced battery of nine pounder cannons she carried a broadside weight of metal of 135 pounds, and her crew totalled one hundred and ninety-five men and boys. Her captain was a well-regarded mature officer in his late forties who had returned several years previously from a stint in the East Indies, one of his junior officers on that station having been a certain Horatio Nelson.

The Surveillante was little more than a year old and carried twenty-six 12-pounder cannons on her gun deck, and six 6-pounders on her forecastle and quarterdeck, equating to a broadside weight of metal of 174 pounds. She enjoyed a superior complement of two hundred and fifty-five men and boys, and her captain was an ambitious and brave French aristocrat in his late thirties, who having been taken prisoner in the previous war had an urge to repay the British for his injured pride.

With both antagonists closing relentlessly in a light wind but heavy swell, the Surveillante, which was sailing up close-hauled from the south-west, tried some long ranging shots to which the Quebec, also on the same tack, did not respond. Instead, Farmer withheld his fire until just after 10 a.m., when being within a hundred yards of his opponent he unleashed a full broadside. The two frigates were soon blasting away at each other, side to side, until about an hour into the action Farmer attempted to haul up and get across the French frigate’s stern to rake her. Realising the danger in time, the Surveillante bore up too, so that both frigates were now before the wind.

In this position they continued to pulverise each other to such an extent that their damaged masts could no longer cope with any other course but running before the wind. Farmer’s collar bone was smashed, and his finger shattered, whilst his first lieutenant, Francis Roberts, had part of his arm amputated before returning to the deck to continue the fight. Du Couëdic was twice wounded in the head by musket balls, but like his opposite number remained on deck to encourage his ever-decreasing crew. Such was the casualty rate that soon aboard the Quebec there were barely three men at each cannon instead of the usual seven.

Shortly before noon all of the Surveillante’s masts went over her larboard, unengaged side, to be quickly followed by all those of the Quebec. Unfortunately for the British frigate her masts fell fore and aft, thereby hampering the efforts of the upper deck gunners to maintain their fire, and of the remaining officers to manage her. Enjoying superiority in manpower, Du Couëdic determined to board, and the two ships drifted together with the Surveillante’s jib becoming enmeshed in the wreckage of the Quebec’s mizzen mast. Captain Farmer ordered the Quebec’s gunners to fire down through the enemy’s hull to sink her, but by now his frigate’s mizzen topsail had fallen over her engaged side and been set alight by the cannon fire. Rapidly the blaze became uncontrollable.

The end of the engagement

As the fire took hold and roared up on to Farmer’s quarter-deck, Du Couëdic, who had been wounded again, recalled his three nephews who were leading his boarders, cut his bowsprit loose from its entanglement in the British masts, and began to boom the Quebec off. Some of the fire had spread to the Surveillante but it was soon extinguished. The French firing was briefly wild as she rolled uncontrollably in the swell, but realising that the Quebec’s situation was hopeless and that the battle was certainly over, Du Couëdic ceased firing. Aboard the British frigate Farmer tried to flood the magazine and prevent any explosion by turning his pumps on it, but by now the fire was winning the battle.

In such circumstances enmity usually turned to humanity and the aggressor ship could be expected to do all she could to save the lives of her erstwhile opponents. But on this occasion, with a heavy swell running and barely any wind, the Surveillante was unable to work up from leeward, whilst the Rambler and Expedition, which had been in action since 11 p.m., were too distant to windward to be of any assistance. In desperation Lieutenant George sent off a boat with his master and five armed seamen, and it was able to pick up a masters’ mate, two midshipmen and fourteen seamen, although a second rescue attempt was deemed too dangerous as the Quebec’s guns were going off as the fire reached them. The French did not even have any boats left to send away and could do little more than throw floating objects to help the Britons in the water, one of the eleven men rescued in this fashion being the first lieutenant, Mr Roberts. One account later suggested that the French fired upon the Rambler’s boat, but given the subsequent French chivalry towards the surviving British sailors it is likely that this shot either came from a rogue gun-crew, or more likely from the heated guns of the Quebec. To the contrary it was reported that the Expedition had broken off her engagement with the Rambler to try and help the stricken men of the Quebec, although in the confusion of battle this could not be confirmed either.

For five hours the fire raged aboard the Quebec, and when it inevitably reached the magazine she exploded and went down with the sun at around 6 p.m. Of her crew totalling one hundred and ninety-five men and boys only sixty-eight survived, being picked up by the Surveillante, the Rambler, and a foreign vessel which had arrived on the scene, and which by various accounts was Russian, Prussian or Dutch. The Surveillante, having suffered casualties of thirty men killed and eighty-five wounded, only got back to Brest under tow of the Expedition, and with the assistance of the British prisoners that had been taken aboard her. As an act of good faith these men were immediately returned home by the noble French, who had treated them well.

Sadly, Captain Farmer was not among the returnees. He was so badly wounded that his men had earlier considered removing him to the Rambler, and the most reliable account of his death suggested that he had remained seated on the anchor-fluke until the Quebec had gone down, resolute in his defiance not to surrender. Another account suggested that he had jumped overboard and drowned whilst trying to swim for the Rambler, but given the state of his wounds this was unlikely.

Farmer’s gallant defence and conduct was recognised by the bestowal of a baronetcy and a promotion to the rank of lieutenant for his eldest son, whilst his pregnant wife and each of her eight children in addition to the unborn ninth were granted a pension by the government. Mr Roberts, who returned to Portsmouth on parole on 28 October, was promoted master and commander. Meanwhile the bold and chivalrous Du Couëdic died of his wounds three months after the action, having been promoted captaine de vaisseau, and been honoured by his country. Sadly, a monument erected in Brest to this honourable and most admirable man was destroyed during the French Revolution.