Having spent two years aboard the Romney 50 at Newfoundland in the relatively comfortable role of flag-captain to his father, Rear-Admiral John Montagu, twenty-nine year old Captain George Montagu must have relished the prospect of joining his first frigate command, the Pearl 32, when he was ordered to recommission her in July 1779.

The Pearl, which had been built at Chatham and launched in 1762, had seen regular service throughout the years of peace and in the early stages of the American War of Revolution. More recently she had returned from the Leeward Islands and been paid off in March, prior to being docked for several months at Plymouth to be copper-bottomed and fitted out for service in home waters.

If Montagu was expecting to find a crack crew for his excellent new command, then he was soon disabused of the hope. Of the two hundred and twenty officers, men and boys who were mustered to complete her complement only ten of the crew had ever served in the navy before, and such was the haste under which she was sent to sea that at the time of sailing the hands had not even been watched or quartered. 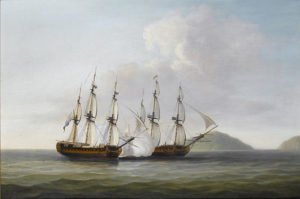 The engagement between the Pearl and the Santa Monica

Thus, when four weeks into his cruise Captain Montagu fell in with the Spanish frigate Santa Monica 32, Captain Don Manuel de Nunes, off Fayal in the Azores at 6 a.m. on 14 September, he found himself facing not only a superior crew in number of two hundred and seventy-one men, but also presumably in experience. In tonnage the two-year-old Santa Monica was half as big again as the Pearl, she was some twenty-feet longer, and she carried twenty-six 12-pounders on her main deck and two 4-pounders on her quarterdeck. By contrast the Pearl boasted a slightly heavier weight of metal with twenty-six 12-pounders on her main deck and six 6-pounders on her quarterdeck.

The Santa Monica was part of a squadron of four sail of the line and two frigates under the command of the outstanding explorer and scientist, Don Antonio de Ulloa y de la Torre-Giral that had been patrolling between Galicia and the Azores following Spain’s entry to the war in June. It was a singular fact that Don Antonio had been made a Fellow of the Royal Society when a prisoner of war in England some thirty years before, and such was his thirst for knowledge that apocryphal stories would later be told of his being distracted by a book when he should have been looking to the security of the Santa Monica.

Upon sighting the Spanish frigate, and giving little thought to the inexperience of his crew, Montagu set off in pursuit to the north-west, and by 9.30 a.m. he had brought the enemy to action some eighteen miles to the south-east of Corvo Island, itself the most northern of the Azores. The frigates quickly got to grips with each other, and over the next two hours a merciless combat ensued. It was the Spaniard that suffered the greater however, and at the end of the engagement she had been cut to ribbons aloft, and thirty-eight of her crew had been killed in addition to forty-five wounded. Those uninjured men had fled their guns when they could no longer resist, leaving Captain Nunes little option but to strike his colours. The Pearl’s casualties were twelve men killed and nineteen wounded, but materially Montagu’s frigate was little damaged.

The Santa Monica was the first Spanish loss of the war, and she was purchased for the navy with a 36-gun rating to be commissioned under her given name. Unfortunately, she only remained under the colours for a couple of years before she was wrecked off Tortola on 21 January 1782 when under the command of Captain John Linzee. The Pearl remained in active service until 1801, and although she always proved to be a successful cruiser, she never achieved any greater glory than on the day her very raw crew took the Santa Monica.