Upon gaining intelligence that two Spanish treasure-ships were shortly due to arrive at the principal Spanish fortress on the Honduran coast in Central America, San Fernando d Omoa, Vice-Admiral Sir Peter Parker commanding the Jamaican station assembled a force to attempt their capture. The command of the operation was given to Captain Hon. John Luttrell of the frigate Charon 44, and the squadron otherwise consisted of the frigates Lowestoft 32, commanded by the admiral s rapidly promoted son, Christopher, and Pomona 28, Captain Charles Edmund Nugent, in addition to the schooner Racehorse, commanded by a Lieutenant Trott, and several small craft.

Having put to sea in calm weather on 8 September, Commodore Luttrell ordered Captain Nugent to remove into the Racehorse for the purpose of obtaining pilots conversant with Omoan waters from St. George s Key, a small island off the present day coast of Belize. As he had visited the peaceful cay just some six weeks earlier, Nugent had not the slightest inkling of any danger when he returned on the dark night of 19 September. Unfortunately however, Spain had conquered this disputed cay just four days previously with a force of six hundred men. 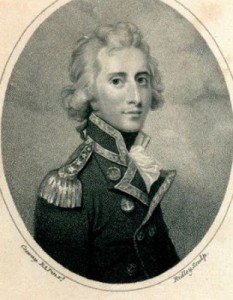 As Captain Nugent s barge came inshore a flotilla of Spanish gunboats in company with a brig flying British colours came out to meet it, and after the merest engagement the sailors were easily overpowered and their boat sunk. Nugent s situation was now extremely desperate, for the Spanish were under orders to summarily execute for treason any inhabitants who resisted what was deemed to be their valid occupation of the cay. A scaffold was erected and Nugent and his men were kept in close confinement whilst arrangements were made for their execution. In the act of liberating the British of their possessions however, Nugent s orders were discovered, and with his identity being established he and his men were put in irons, blindfolded and thrown into prison rather than subjected to the death penalty.

In the meantime the Spanish occupiers had pushed further out to sea in the hope of capturing the Racehorse, but in a brief engagement they were thrown back by the schooner s crew who sunk a couple of gun-boats and caused some fatalities aboard an eight-gun schooner in return for the loss of two men killed and three wounded. Lieutenant Trott then rushed news of Captain Nugent s capture to the Pomona at Key Boquel, and both vessels returned to St George s Key, causing such panic amongst the Spanish forces that they fled in their boats. Nugent and his men were now able to break gaol, and showing great initiative they pursued the Spanish, albeit unsuccessfully, in the British brig, before returning to St. George s Key. The brig was immediately re-commissioned into the navy and left on guard over the settlers as they collected their property and slaves prior to conducting them to Rattan Island.

Whilst the arrangements pertaining to the settlers were being effected, Nugent sailed with the pilots to rejoin Commodore Luttrell at Glover s Reef, from where the squadron departed in search of the treasure ships. Defying British expectations, the Spanish were not to be found upon the squadron s arrival in the Gulf of Dulce on the evening of the 22nd, and neither were the goods they had transported to be found in the abandoned warehouses up river. Luttrell accordingly sent the Racehorse away to seek intelligence, and she soon returned with the advice that the treasure ships were under the guns of Fort San Fernando at Omoa, where two vessels were apparently ready for sea and a third had her topmasts and yards struck. Lieutenant Trott also advised that the defences at Omoa appeared to be surmountable.

Accordingly at midnight the British squadron arrived off Omoa, but an immediate attack was vetoed by the pilots who had not the confidence to take the ships inshore. Daylight revealed a 40-gun defence that was far superior to Lieutenant Trott s estimation, whilst all three ships in the port had by now struck their topmasts and yards down on deck and been moved to safety in a creek. Luttrell decided that it was imprudent to prosecute an assault with the forces at his disposal, so instead he decided to put back to sea in the hope that his departure would convince the treasure ships it was safe to come out, and that he could subsequently attack them off Cape Antonio.

Not long after departing Omoa, the squadron had the good fortune to fall in with the Porcupine 20, Captain John Pakenham, which was conveying from Jamaica a mixed bag of five hundred troops from the Royal Irish Regiment and some Mosquito Coast Indians, the whole led by Captain William Dalrymple being intended to offer protection to the Bay of Honduras settlers from the marauding Spanish. Deciding that this force in addition to his own would be adequate for attacking Omoa, Luttrell convinced Dalrymple to throw in his lot with the enterprise, and having collected further reinforcements in the shape of some two hundred and fifty settlers, a suitably strengthened British force returned to attack Fort San Fernando at Omoa.

A landing of one hundred and fifty troops, Indians, and a naval contingent was superintended by Captain Pakenham at Puerto Cabello on 16 October, and this force commenced a nine-mile march at 11 p.m. towards Omoa in the expectation of commencing a night assault. The terrain was anything but friendly, with mangrove swamps and mountains proving such natural obstacles that the invaders were occasionally forced to wade through the sea. Come the morning the fatigued and fragmented force was still over five miles from its objective and so Dalrymple allowed it a two-hour rest. Suitably refreshed, they routed a party of some fifty Spaniards who came out to dispute their advance, sending them scurrying into the fort and the town, from which they continued to fire upon the invaders. Facing such a heavy resistance the British had no option but to set fire to the town, and now those defenders who could not reach the fort raced into the woods. 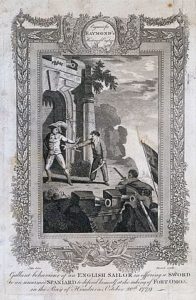 A gallant British sailor allows a sword-less Spanish officer to defend himself.

To the backdrop of the fires raging in the town, the Lowestoft, Charon, Pomona and Porcupine sailed in under such a ferocious cannonade from the fort that it stilled the wind and prevented the squadron from assuming its favoured position. The Lowestoft and Charon were able to lay down a determined long-range bombardment, but when the former attempted to move under fire into closer range she drove aground. Although the frigate was subsequently heaved off it was only after incurring such damage from the fort that she was obliged to anchor and effect repairs both aloft and below. With the Charon too receiving damage to her rudder, wheel and mizzen-mast Commodore Luttrell withdrew in order to consider his options.

Two days later some of the Porcupine s guns were landed and dragged up to a battery erected by Dalrymple, but the fire from these proved so ineffectual that the Luttrell was again obliged to re-think his tactics. Next the Pomona was towed closer inshore on the night of the 19th and a more sustained bombardment on the fort was opened up. This diversion allowed Captain Dalrymple s men to advance silently in the dark of the early hours and they began to storm the fort at 4 a.m.

At the head of the party which scaled the walls of the fort were two seamen who guarded the tops of their ladders as their comrades ascended and broke through the enemy defences to open a gate. Another British seaman earned himself eternal glory by passing a cutlass to an unarmed Spanish officer who in a sleepy confusion had rushed out without a sword, thereby allowing the man to defend himself. The majority of the Spaniards showed no such stomach for a fight however, and whilst a hundred or more fled from a sally port the remainder of the garrison numbering some three hundred and seventy men surrendered.

In no time, and although the British had been outnumbered by two to one, the fort had been secured. Five Britons, including a midshipman, were killed in the assault, and total casualties in both the rag-tag army and navy numbered twelve killed and twenty-six wounded. The treasure ships laden with goods to the value of 250 quintals of quicksilver or three million dollars were seized, Fort San Fernando was garrisoned, and Captain Pakenham was sent back to England with despatches announcing the brilliant conquest.

Regrettably, the postscript to the capture of the treasure ships was far from happy. With regard to the fort, the British only retained possession of it until 28 November when in the face of a Spanish counter-attack, and with the garrison being riddled with disease, it was abandoned. The booty from one of the treasure ships that had been sailed by Lieutenant Bartholomew James of the Porcupine to Jamaica was lost after the storeship to whch it had been removed, the ex-sail-of-the-line Leviathan, foundered in rough weather on 26 February 1780 – to make matters worse for Lieutenant James, he was actually in a small boat alongside the Leviathan when she went down. Finally the seaman who had so honourably passed a sword to the unarmed Spanish officer, and who had been appointed a boatswain by Sir Peter Parker as a reward for his astonishing humanity, was some years later court-martialled, condemned to death and executed for having struck a lieutenant aboard the Ferret.