After an education at Winchester, Ogle entered the Navy in 1788 under the patronage of Captain John Nicholson Inglefield, seeing service aboard the Adventure 44 and from 1790 the Medusa 50 with that officer on the West African station. In September 1791 he joined the Portsmouth-based Alcide 74, Captain Sir Andrew Snape Douglas, and further service followed on the Newfoundland station with the Winchelsea 32, Captain Richard Fisher, and in home waters with the Edgar 74, Captain Albemarle Bertie, and the Boyne 98, Captain William Albany Otway.

On 14 November 1793 he was appointed lieutenant of the Woolwich 44, Captain Charles Craven, serving in the West Indies, and in December he removed to the Vengeance 74, Commodore Charles Thompson. Within a month he rejoined the Boyne 90, Captain George Grey, the flagship of Vice-Admiral Sir John Jervis, from which he was fully employed in the boats and ashore during the Leeward Islands campaign which opened in January 1794. This service included commanding a boat in the successful cutting-out of two schooners at Maran, Martinique, fighting with the army ashore in the campaign preceding the surrender of Fort Bourbon on Martinique, and storming Fort Fleur d’Epée on Guadeloupe. 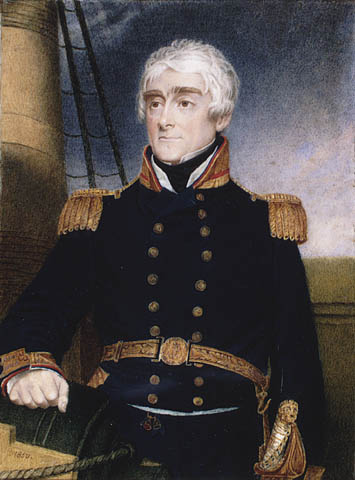 At the end of May 1794 Jervis appointed Ogle the acting-captain of the Assurance 44, and on 21 May he was promoted commander of the sloop Avenger 16, which returned to Portsmouth with the homeward-bound convoy in September and was paid off in the following month.

He was next appointed to the sloop Peterel 16 in June 1795, which came into Portsmouth from a cruise in the following month before going out to the Mediterranean with a convoy. Here on 11 January 1796 he was posted captain to the Minerve 38 by the new commander-in-chief, Admiral Sir John Jervis, in which frigate he undertook convoy duty out of Leghorn and served off Cadiz with the Mediterranean Fleet. On 1 July he was brought to a court martial aboard the Barfleur 98 on a charge of allowing a French privateer to capture a merchantman out of the Peterel’s convoy in January, but happily the charge was proven to be ill-founded and he was acquitted.

In August 1796 Ogle exchanged with Captain George Cockburn into the Meleager 32, serving with the Mediterranean Fleet at the blockade of Cadiz in 1797 and visiting Lisbon to pick up a convoy to replenish the fleet. Towards the end of the year his command captured a homeward-bound packet from South America, and on New Year’s Day 1798 she went into Cadiz with a flag of truce to land some prisoners, taking the opportunity to count the Spanish fleet. The Meleager departed Oporto for England with a convoy in March in the company of the Minerve and Captain Cockburn, and she remained at Spithead during the summer before on 29 September she was dispatched with two other frigates for the coast of France to return a week later.

At the beginning of November 1798 the Meleager was waiting at Portsmouth for a fair wind to sail for the West Indies with a convoy, and she eventually got away with this fleet and three other frigates on the 20th. The passage out to the Caribbean was disrupted by bad weather which saw forty vessels part company in the Bay of Biscay, with one sinking and another being captured. Arriving at Martinique in January 1799 and later serving on the Jamaican station, the Meleager captured nine richly-laden prizes in the Gulf of Mexico including one carrying quicksilver. After exchanging with Captain John Crawley into the Greyhound 32, Ogle departed Jamaica for England on 25 February 1800 to arrive in the Downs at the end of April, and shortly afterwards his new command entered dock at Chatham.

Retaining the Greyhound when she returned to sea, on 1 September 1800 Ogle departed Portsmouth with a convoy, and at the beginning of 1801 his frigate was at Smyrna awaiting the completion of a convoy of transports carrying horses and forage before departing in February for the Egyptian campaign, which commenced with the landings by British forces on 8 March. In October the Greyhound captured a 10-gun Genoese privateer, and Ogle eventually returned home in the French prize Egyptienne 40 which reached Portsmouth on 30 January 1802 from Malta and underwent quarantine before sailing around to Chatham.

A newly-wed Ogle remained on the beach during the early years of the Napoleonic War until he was appointed to commission the new frigate Unite 38 at Woolwich in April 1805. A hot press on the Thames in May provided him with sufficient men to go down river, and he reached Portsmouth on 21 August from the North Sea. Days later the Unite took a convoy around to the Downs, and she was back at Portsmouth by 16 September to be fitted out for service on the coast of Portugal. In November she left with a convoy of thirty transports carrying two regiments for the Mediterranean, although she had to escort them into Lisbon on the 21st of that month upon being informed that the Rochefort squadron was at sea.

On 19 June 1806 Ogle was appointed to the yacht Princess Augusta, and he returned from the Mediterranean to Portsmouth on 4 September aboard the sloop Racehorse 16, Commander Robert Forbes, being presented to the King at a levee shortly afterwards. He remained in command of the yacht until June 1815 when he returned to active service upon succeeding Commodore Sir Thomas Masterman Hardy aboard the Ramillies 74. Arriving at Portsmouth on 21 June, his vessel’s lower deck guns were removed and a number of her crew released in order for her to go around to the Downs and embark French prisoners of war for further conveyance to Stapleton in Bristol. By October the Ramillies was fitting out for guardship duties at Plymouth, and on 20 November Ogle transferred at the Devonshire port to the Malta 80. He remained with this vessel for just a few weeks before joining the Rivoli 74 on 20 January 1816, which was fitting out as a guardship at Portsmouth, and which he retained until September.

On 27 August 1816 he succeeded to his father’s baronetcy, and he was promoted rear-admiral on 12 August 1819. For a number of years he held the position of steward at the Winchester Races, and he was a prominent member of society in Hampshire. In January 1827 it was announced that he had been appointed the commander-in-chief of the North American station, and at the end of May he hoisted his flag at Portsmouth aboard the Hussar 38, Captain Edward Boxer, with William Barwell as his flag-lieutenant, prior to setting sail for his station on 8 June. Largely dividing his time between Bermuda, Halifax, and Quebec, his tenure on the North American station was a quiet one and he even had the opportunity to visit Niagara Falls in the late summer of 1829. Shortly after coming home in July 1830 he was presented at court to the newly installed King, William IV, and he was advanced to the rank of vice-admiral on 22 July. 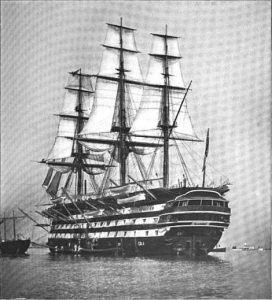 Despite his financial clout Ogle came bottom of the poll for election to Parliament as the M.P for Norwich in the General Election of September 1830, but he was returned unopposed by the fifteen electors for Portarlington as their M.P., holding the seat in the Tory interest; however, he retired at the dissolution in the following year having never spoken in parliament.. During the next dozen years he was a frequent visitor to Brighton, and in 1833 he chaired the committee meeting of the management of the Arctic Land Expedition when it sat following the return to England of its leader, Captain John Ross. He continued to attend levees and enjoy private audiences with the King, and in addition to being promoted admiral on 23 November 1841 he was elected President of the Royal Naval School by his peers in the same month.

In July 1845 it was announced that he would become the commander-in-chief at Portsmouth, and on 1 October he hoisted his flag aboard the Excellent 98, Captain Henry Ducie Chads, transferring it in the following month to the St. Vincent 120, Captain Sir Richard Grant. Typically he threw himself into the role, being an active host and patron of the town, whilst also being sufficiently elevated in society to be invited by Queen Victoria to lunch with her at Osborne House on the Isle of Wight. In June 1846 he flew his flag aboard both the Excellent and later the Victory 104, Captain John Pascoe, before going back to the Excellent and then to his regular flagship, the St. Vincent, the captaincy of which passed that year to Alexander Milne. In July he hosted both the elderly Ibrahim Pasha of Egypt, who was undertaking a tour of Western Europe, and a week later Queen Victoria, who was returning to London from the Isle of Wight, this being a duty he regularly undertook due to Portsmouth’s location. Alongside these official responsibilities he also took the occasional cruise in his yacht, the Fanny. In October 1846 he resigned his presidency of the Royal Naval School to concentrate fully on his duties at Portsmouth, and in August 1847 he took ten days leave of absence to visit his old flag-captain Sir Richard Grant. By March 1848 he had transferred his flag to the Victory 100, Captains Charles Eden and Francis Blackwood, and he left his post as commander-in-chief at the end of September when after paying a final visit to his flagship he took the late afternoon train to Brighton.

In his final years of retirement Ogle remained ever-active, taking a vacation at Southsea in 1850 where he was able to interest himself in the comings in the naval operations, and visiting Woolwich Dockyard in February 1851. He also maintained his lofty position in society, as illustrated in June 1852 when he attended a huge assembly given by the chancellor of the exchequer, Benjamin Disraeli, at his residence in Grosvenor Gate, Park Lane. His crowning glory came on 8 December 1857 when he became the admiral of the fleet.

Admiral Ogle died at Tunbridge Wells on 16 June 1858 after a short illness, having gone down into Kent to escape the hot weather. He was buried in St. Mary’s Church, Ponteland, Northumberland close to the Ogle family seat.

He married Charlotte Margaret, the daughter of General Hon. Thomas Gage and sister of Admiral of the Fleet Sir William Hall Gage, on 22 April 1802 at St. George’s Church, Hanover Square. She died in September 1814 after having issue two daughters and a son, Chaloner, who joined the army. One of their daughters, Charlotte, died as the Countess Charlotte Briedenback in Darmstadt in July 1840. Ogle then married, Letitia, daughter of Sir William Burroughs Bt. at St. George’s Church, Hanover Square on 4 September 1820, who died at Belgrave Square on 13 November 1832, and by whom he had one son. He was married a third time on 10 April 1834 to Mary Anne, the daughter of George Cary of Tor Abbey, Devon, who herself was twice a widow, and who died on 4 February 1842 without issue. Ogle owned New Place, Alresford in 1802, and his London address in later life was 4 Belgrave Square.

Ogle was a pillar of the community and a keen supporter of charitable causes, in particular naval institutions such as the Royal Naval Benevolent Society, of which he was president. In old age he was a great friend of Admiral Hon Sir Thomas Bladen Capel, whom he often visited.