1743-92. He was born on 1 April 1743, the eldest son of Thomas Pakenham, the 1st Lord Longford who was an Irish peer of modest means, and of his wife Elizabeth Cuffe. He was the brother of Admiral Hon. Sir Thomas Pakenham.

Having been educated at Kilkenny College from 1753, Pakenham joined the Navy six years later and after service in the Seven Years War was commissioned lieutenant on 12 August 1761. 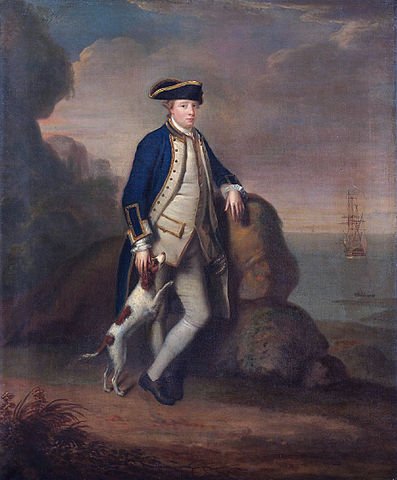 In 1765 he was the second lieutenant of the Romney 50, Captain James Ferguson, which vessel flew the flag of Rear Admiral Lord Alexander Colville on the North American station. Somewhat astonishingly he was allowed to buy out Captain James Feattus of the storeship Crown 44 from his post for a sum of 1,200 and assume the command himself. He took the Crown back to England where she was paid off in September at Woolwich, and where he found that he had already been promoted commander of the sloop Bonetta 10 on 20 June 1765.

During 1765-6 Pakenham sat as the M.P for County Longford in the Irish Parliament, and in the latter year succeeded to his father s Irish barony. He was also posted captain on 31 May 1766.

Being wary of fighting the American colonists with whose cause he had great sympathy, he remained unemployed until war with France became inevitable, whereupon he commissioned the new but ill-sailing America 64 at the beginning of 1778. In the prelude to the Battle of Ushant on 27 July he displayed great forbearance by refusing to return the fire of the frigate Licorne 32 when she struck her colours immediately after firing into the America whilst Longford was conversing with her captain. During the winter Captain William Garnier temporarily acted for him, but he was back in command of the America with the Channel fleet during the early summer of 1779.

Having succeeded Captain Richard Kempenfelt, he commanded the Alexander 74 in the Channel fleet retreat of August 1779 and during June-December 1780 in the Channel fleet campaign. Continuing in the Alexander, he captured the French privateer Duguesseau off the coast of Ireland and was present at the Channel fleet s relief of Gibraltar on 12 April 1781 where Rear-Admiral Sir John Lockhart-Ross shifted his flag into the Alexander to enter the harbour with three sail of the line and offer greater protection to the men unloading the convoy. For part of 1781 Commander Thomas Boston and Commander Thomas Farnham both acted for him, but Longford commanded the Alexander in the Channel fleet campaign of June-November, and was subsequently present in the under Vice-Admiral Lord Howe s orders during the Channel fleet summer campaign of April-August 1782, and at the relief of Gibraltar and the engagement off Cape Spartel on 18 October. He left her shortly afterwards and although he was appointed to the new Carnatic 74 hostilities came to an end and he retired to his estate and growing family in Ireland.

Longford died in Ireland on 3 June 1792 having suffered several years of poor health and fading eyesight.

On 25 June 1768 he married Catherine Rowley and had issue five sons and six daughters. His second son, Major-General Hon. Sir Edward Michael Pakenham, served the Army in the Napoleonic Wars with distinction and was killed at the Battle of New Orleans in 1814. His third son was Lieutenant-General Sir Hercules Robert Pakenham, and his fourth son Captain Hon. William Pakenham who lost his life in 1811 when the Saldanha 36 was wrecked off Lough Swilly. His daughter Catherine, known as Kitty became the wife of the future Duke of Wellington. Longford s residence was Pakenham Hall Castle, near Castlepollard, County Westmeath which he did much to improve.

Regarded as humble, benevolent and just, he was a friend of Captain Lord Mulgrave who as a lord of the Admiralty was able to obtain him a command in 1778.