At daybreak on the glorious morning of Wednesday 19 June, some twenty miles south of Start Point, Devon, the Nymphe 36, commanded by Captain Edward Pellew, and two days out of his home port of Falmouth bound for Spithead, found herself in the company of the one year-old French frigate Cl op tre 36, Captain Jean Mullon, three days out of St. Malo. Upon bearing down on his enemy, one that he had first sighted during the night and had followed throughout the hours of darkness, Pellew was delighted to see her take in her sails and await him.

The Nymphe was French built, having been launched in 1777 at Brest and captured off Ushant by the Flora 36, Captain William Peere Williams, in 1780. Shortly afterwards she had flown British colours under Captain John Ford at the Battles of the Chesapeake in 1781 and St. Kitts and the Saintes in 1782, but apart from being briefly commissioned during the Dutch and Spanish Armaments she had remained unemployed from the end of the American Revolutionary War until Pellew had fitted her out in January 1793. Details of her armament at this time vary but she was probably carrying twenty-six 12-pounder cannon on her main deck, twelve 24-pound carronades on her quarterdeck and forecastle, and two further long-nines on her forecastle, equating to a possible broadside of 309 pounds. Amongst her inexperienced crew of two hundred and forty men were eighty raw, incomprehensible, brutal but loyal and eager tin miners from Pellew s home county of Cornwall. 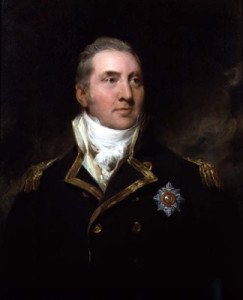 The Nymphe was facing a formidable commander in the 42 year-old Captain Mullon who had learned his trade under the brilliant Commodore Pierre Andr de Suffren some years earlier, and who led a crew of three hundred and twenty men on the Cl op tre. The French frigate had a nominal armament of twenty-eight 12-pounders and eight 6-pounders, but at the time was apparently carrying forty cannon with a broadside weight of metal of 286 pounds. Rather than focusing on the destruction of British trade, as was the usual French approach, the traditional Mullon was anxious to show his ship s mettle, and thus he did not hesitate in accepting an engagement from the British frigate.

Once the ships were within range at about 6 a.m. Pellew hailed the Frenchman, but receiving no answer shouted hoa hoa , prompting the hitherto silent British crew to man the shrouds and cry Long live King George the Third . Immediately the French responded by proclaiming Vive la Nation , whilst Mullon defiantly waved his cap of liberty from the gangway before passing it to a sailor who pinned it to the main truck. Pellew swept off his hat in a chivalrous gesture to his opponent, and he held it for some minutes in his hand before eventually replacing it on his head at 6.15 a.m., this being the pre-ordained signal for the Nymphe to open fire.

With the two ships running before the north-easterly wind a hot and close action followed between the well-matched opponents at hailing distance from about 6.30. Shortly before 7 a.m. the Cl op tre lost her mizzen mast and wheel, the latter being shot away by Pellew s brother Israel, who would later be described as being accidentally on board , and who had been given command of the after guns on the main deck. His gunnery would also account for the helmsman and his three subsequent replacements. At about the same time Captain Mullon was hit by a round shot that smashed into his back and tore away his left hip, and he fell to the deck, fatally wounded.

These mortal blows caused the Cl op tre s bows to swing aboard the Nymphe, and her disintegrating bowsprit became wedged against the British frigate s badly damaged mainmast. With some agitated apprehension Pellew s men waited to see whether the mast would fall, but fortunately it was the French jib-boom that tumbled away. The two vessels became locked together, head to stern and held fast aloft by the Cl op tre s main topmast larboard studding sail boom hooking on to the Nymphe s main topsail larboard leech-rope. Anxious lest this entanglement would inflict fatal pressure on his mainmast, Pellew offered a reward of ten guineas to any man who would go aloft and cut free the leech rope, and two men immediately rose to his challenge and successfully completed the task. At the same time up aloft the ships were in such close proximity that men from the Nymphe were already attacking their enemy on the French frigate s yards.

Back on deck, and having surmised that the act of the Cl op tre s ramming presaged a French attempt to board, Pellew called forth his own boarders to defend their ship. This force contained most of the Cornish tin miners and was led in two parties by Lieutenants Amherst Morris and George Luke. But French boarders there were none, and so instead the British leaped across to the Cl op tre s forecastle from the quarter-deck, other men rushed through the main deck gun-ports, and soon the French were being forced back along their own gangways. The impetus was comprehensively with the men of the Nymphe, and within ten minutes Mr Luke was able to oversee the raising of the British colours. It was 7.10 and the battle had been won. 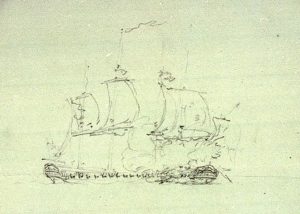 A sketch of the action between the Nymphe and Cleopatre.

During the bloody fifty-five minute encounter, one in which Pellew would later assert that the French had fought bravely, the Nymphe suffered twenty-three deaths including the boatswain, Tobias James, and twenty-seven men wounded, including Lieutenant George Luke, and Lieutenant John Whittaker of the marines who lost an arm. This was no small number for such a single-ship action, but it was dwarfed by the French casualties that numbered about sixty men killed and wounded. Amongst the dead and dying in the carnage on the Cl op tre s deck were all of her senior officers including the mortally wounded Captain Mullon, who in his death throes had desperately tried to swallow what he believed to be the private signals. Sadly, and perhaps poignantly, the paper was merely his commission.

On the morning of 20 June the Nymphe and her prize arrived at Portsmouth to the cheering of all the vessels present, and when Pellew went ashore that afternoon he was accorded three cheers by a huge crowd at the New Sally Port and the church bells were ordered to be rung. Once the news of his victory was received in London the King gleefully announced the tidings from his box at the opera, and on the 29th he did Pellew the honour of knighting him at St James Palace. At the same levee the newly posted Israel Pellew was also presented to His Majesty, whilst at the Admiralty Lieutenant Morris was promoted commander, although he sadly died on 29 April 1803 before securing any further advancement.

The empathetic Pellew earned further personal honour, if somewhat less tangible, when having buried Captain Mullon with all due ceremony in Portsmouth churchyard on 23 June he sent money and her late husband s personal effects to the Frenchman s widow. To their credit the French republican authorities wasted little time in complimenting Pellew on his gallantry, whilst in England the Committee for encouraging the capture of French privateers awarded Pellew plate to the value of 100 guineas. A claim by Captain Jonathon Faulknor of the Venus 32 that he was entitled to a share of the prize money pertaining to the Cl op tre s capture, as per a previous agreement with Pellew that the two captains would pool their rewards when cruising together, temporarily threatened to sour the affair, but Pellew was having none of that on the basis that Faulknor had been under Admiralty orders on the day of the engagement. The dispute would eventually be settled in Pellew s favour and the prize money paid out to his men at Spithead on 23 December.

The Cl op tre was bought into the navy as the Oiseau 36, and she would see service in the East Indies during the late 1790 s before returning to Europe and being fitted out as a prison ship at Plymouth in 1806. The Nymphe enjoyed further glory when under the command of Captain John Cooke she assisted the San Fiorenzo 36, Captain Harry Burrard Neale, in the capture of the R sistance 40 and Constance 22 from under the noses of the French fleet at Brest in March 1797. She thereafter remained in commission until she was lost in the Firth of Forth under the command of Captain Edward Sneyd Clay in December 1810.