As the American War of Revolution progressed, so the omnipresent Captain Sir James Wallace remained as active as ever. Despite his command, the Experiment 50, having been captured by the French fleet off North America in the previous September, he had been quickly exchanged, acquitted of any blame at a court-martial for the loss of his ship, and speedily appointed to the Nonsuch 64, a vessel that had recently returned home from the Leeward Islands.

Sent to cruise off the French coast, Wallace soon captured the French corvette Hussard 18 near Ushant on 5 July. Nine days later the Nonsuch was off the mouth of the River Loire when at 10 a.m. she fell in with a convoy of twenty-two coasters bound from Brest to Nantes and Bordeaux. This convoy was under the escort of the frigates Belloné 36, Etourdie 36, and Légère 36, although the latter was only carrying twelve cannons on board. Wallace easily captured three of the coasters and in the process drove the Légère onto the Blanche bank. After burning the beached vessel the next morning, he was still in the vicinity of Croisic at midday when three French vessels were observed exchanging signals in the north-west. To these he immediately gave chase. 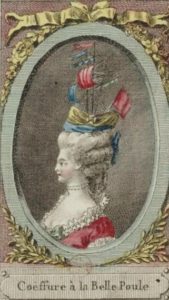 It was not until about midnight, after a pursuit of some fifty miles to the south, that the Nonsuch was able to come up with the stern-most of the sail near the Ĭle de Yeu, and she proved to be the celebrated twelve-pounder frigate Belle Poule 32, commanded by the Chevalier de Kergariou-Coatlès. This was the frigate that had fought a ferocious two-hour duel with the Arethusa 32 prior to the Battle of Ushant in 1778, following which a fashionable Parisian hairstyle had been invented in her honour.

Despite being run down, the French frigate still endeavoured to make good an escape, but inside twenty minutes her captain came to realise that this was a pointless exercise. The Belle Poule’s only hope of salvation lay in disabling the superior Nonsuch, and this Kergariou-Coatlès bravely tried to do, yawing three times across his pursuer’s bows and firing off full broadsides on each occasion at his opponent’s masts. The fire had little impact on the Nonsuch which ploughed on relentlessly, her cannons slowing down the out-gunned French frigate and enabling the muskets of her marines to account for many men on the Belle Poule’s unprotected deck.

Having manoeuvred onto the Belle Poule’s larboard bow, the Nonsuch set up a relentless bombardment from about 2 a.m., and Kergariou-Coatlès, who had been exhorting his men with the battle cry: ‘Courage mes enfants! Courage!’ was amongst many casualties, being severely wounded and taken below. He was succeeded in command by another wounded officer, Lieutenant Lamotte-Tabourel, who fought on for another three quarters of an hour until there were fifteen shot holes in the frigate’s hull, and she was taking in such water that her pumps could no longer prevent the depth in her hold from rising to a level of six feet. At 3 a.m. the Belle Poule struck her colours, and an hour later Wallace got a boarding party aboard the badly damaged French frigate. Its first task was to organise repairs to prevent her from foundering on the spot.

Their noble resistance resulted in French casualties of twenty-four men killed and forty-seven wounded out of her crew of two hundred and seventy-five men, the former figure including her gallant commander whose wound proved fatal. The Nonsuch lost three men killed and ten wounded, of whom two later succumbed to their injuries. The Belle Poule’s consorts, Amiable 32 and Rossiniolle 20, meanwhile made good their escape.

The Belle Poule, which had been launched in 1766, was later bought into the British Navy as a 36-gun frigate under her existing name, and after a fitting out at Portsmouth she was commissioned by Captain Philip Patton. Amongst the other officers who would serve aboard her before the end of the war was a certain sailing master by the name of William Bligh. Following the war she would be laid up at Chatham, and thereafter she saw no further service.