On 7 July news of the impending war with France reached the British governor-general at Calcutta, and with immediate effect the commander-in-chief in the East Indies, Commodore Sir Edward Vernon, was ordered to assist the army under Major-General Hector Munro in undertaking the capture of the enemy s principle base of Pondicherry.

Departing Madras on 29 July with the Rippon 60, two frigates, a sloop and two East Indiamen, Vernon was soon obliged to return one of the latter, the Glatton, when she proved to be a poor sailor. Upon anchoring off Pondicherry on the evening of 8 August the British forced a French frigate to flee into the roads, but Vernon s intention of instigating a blockade of the port was thwarted at 8 a.m. the next morning by the arrival in the south-west of a French squadron commanded by Captain Jean Baptiste Francois l Ollivier de Tronjoly. This consisted of the flagship Brilliant 64, a frigate, and three merchantmen that had been hastily commandeered for service as a further frigate and two corvettes, the manning of which had severely drained the French naval vessels of fighting seamen. 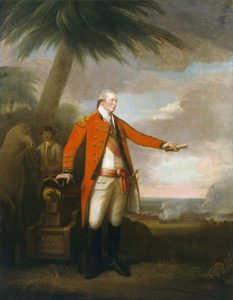 The British gave chase, but due to light winds it was not until 6 o clock on the morning of the 10th that there was any possibility of commencing an action. The French formed line of battle in five ships abreast to bear down upon the British whilst Vernon quickly formed his four men of war into a line ahead before hoving to at noon in order to receive the attack. Forty-five minutes later the wind veered in favour of the British who took immediate advantage of the weather-gauge by standing toward the French with the intention of passing on opposite tacks before coming about to force an engagement. But once more the winds changed, and Vernon was forced to engage on the opposite tack after all, with a brisk and close-range action ensuing from about 2.45.

Although neither side could justifiably claim to have enjoyed the better of the resulting two-hour fight the French, being less damaged aloft, were able to withdraw to the south-west at 4.45, whilst Vernon retired towards the north-east in order to effect repairs and hopefully renew the action with a favourable wind the next morning. During the brief action the British had lost eleven men killed and fifty-three wounded, with the French suffering similar casualties, Tronjoly being one of the wounded with an injury to his arm.

To Vernon s consternation daylight arrived without any sign of the French, and it soon became apparent that Tronjoy could claim a tactical victory, for by clearing the British away he had been able to gain entrance to Pondicherry on the evening of the 10th. Here they were soon further strengthened by the arrival of the Elizabeth 26.

Vernon was not to be outdone however, and after being hampered by contrary winds and currents he finally returned to anchor between Cuddalore and Pondicherry at midnight on the 20th. A vessel was soon spotted on a course toward the enemy base, chase was given, and not long after dawn what proved to be a Frenchman in ballast from Mauritius was captured. More importantly, at about the same time the French squadron was discovered to be underway heading north-easterly in the Pondicherry Roads, but as the winds were again unfavourable it became clear to Commodore Vernon that there would be no action until the next day. When at last a sea-breeze enabled him to get underway that evening he came to anchor in the Pondicherry Roads.

Come the morning, the British were astonished to find that the French squadron was no longer in view. With provisions running low in Pondicherry Tronjoly had departed for Mauritius in order to preserve the supplies of the French defenders. This inevitably left Vernon a free hand to blockade the French base, and that same day the mixed European and Sepoy army under General Hector Munro commenced their siege operations.

There was further satisfaction for the British on 25 August when the Seahorse 24 and Coventry 28 ran down one of the commandeered French merchantmen, the Sartine 32, which had departed Tronjoly s force in order to deliver supplies to the rebel Sultan of Mysore, Hyder Ali. The French vessel surrendered after the merest of resistance, and a young lieutenant from the Seahorse who would become one of the finest officers in the navy, Thomas Troubridge, led the boarders and personally hauled down the Sartine s colours. The vessel, being but two years old and of excellent quality, was bought into the service with the command going to Captain Alexander M Coy.

On 17 October, having been besieged from land and blockaded by sea, Pondicherry surrendered to the British army. Vernon s flag-captain, George Young, was sent home with despatches announcing the capture, and after arriving in March 1779 he was rewarded by the King with five hundred guineas to purchase a sword. Captain Marlow of the Coventry replaced him on board the Rippon, with Lieutenant Andrew Mitchell of the Coventry being directly advanced to her captaincy. A further change in command arose when Commander William Owen of the Cormorant 18 died in a drink-related incident in October, being replaced by Lieutenant Charles Morice Pole of the Rippon, whilst the British squadron was also bolstered by the arrival of the Asia 64, Captain George Vandeput.

East Indies Squadron as of 10 August: