On 27 June the Admiralty sent orders to 36 year-old Lieutenant John Bazely to report to Deptford and take command of the cutter Alert 10, which having been launched three days earlier was daily expected from Dover. Instructions were given for this vessel to be manned with sixty hands and laden with three months stores for a cruise in the Channel, and several weeks later Bazely received orders from the Admiralty to intercept a rebel vessel that was about to sail from France with despatches and private letters for members of the Congress.

So it was that in light winds some forty-five miles off Ushant at 5 a.m. on Friday 19 September, the Alert found herself in sight of a brig. This vessel was the Bermudan-built American privateer Lexington 16, Captain Henry Johnson, which was bound for her home port of Boston having departed Morlaix, France, two days before. She had previously been operating with some success off the Irish coast with two other rebel privateers, the Reprisal and Dolphin, making at least fourteen prizes, although according to contemporary newspaper reports she had taken, sunk, burned or destroyed up to fifty-two vessels. Her armament consisted of sixteen 4-pounder cannons and twelve swivel-guns, and she was crewed by eighty-four men. 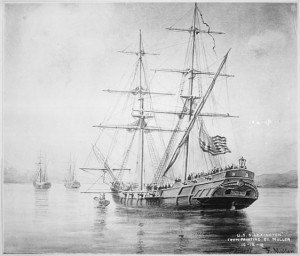 When discovered by the Alert the Lexington was in the east, heading in a westerly direction away from the French coast. Bazely immediately hoisted topsails and royals, cleared for action, and set off in chase. At 6.45 the Alert was close enough to fire a swivel gun and bring the stranger too. A shouted enquiry elicited the response that she was from Guernsey, but then the American rebel colours were suddenly hoisted aloft and they were accompanied by the firing of a broadside into the Alert. A mutual action commenced and continued from 7.30 until 10 a.m. when the Lexington, having caused a great deal of damage to the cutter’s rigging at the cost of her stock of ammunition, hove her sweeps over the side and made off.

Lieutenant Bazely was not to be deprived of his prize however, and having quickly set up new rigging he resumed the chase. Fortunately a rising wind came to his assistance, and at 1.30 in the afternoon the Alert was able to renew the action. After a further hour Captain Johnson, being unable to respond, hailed the Alert and requested her to cease firing as he wished to surrender, and his men were afraid to go aloft and strike her colours. The British commander instructed him to bring-to and come across in his boat, and on clambering aboard the British cutter the American surrendered his sword and Congress commission. Bazely then advised Johnson that he considered him to be a rebel prisoner, but that if he behaved with propriety he would be treated as a gentleman

During the action the Lexington had lost seven men killed including her master, and eleven wounded, whilst casualties from the British crew numbered two men killed and three wounded, one of whom died shortly afterwards. Bazely sent his midshipman, Peter Bruff, and a prize crew of seventeen aboard the American, took sixty-eight prisoners out of her, and after renewing his rigging set sail. A search of the Lexington’s papers would eventually provide valuable information, but it failed to unearth the most vital documents as these had been thrown overboard by the rebels prior to the striking of their colours.

Next morning, with the wind strengthening and the weather getting heavier, the Lexington’s mainmast went by the board, and during the night the two vessels parted company. By the 24th the Alert was in Plymouth where Bazely sat down and wrote to the Secretary of the Admiralty to inform him of his capture. The next day the Lexington made it into the Downs where her wounded were removed to Deal, and where the local population celebrated the victory by their ‘Dover Boys’. Somewhat paradoxically the remaining members of the rebel crew who had not been removed were discovered to be mainly Irish and Scottish youths, whilst conversely the naval midshipman, Peter Bruff, was found to be a nephew of the rebel Major-General Philip Schuyler, having joined the service six weeks previously after being barbarously treated in his native America for refusing to fight in the rebel cause.

Captain John Elliot of the Trident 64, the senior officer in the Downs, reported the Lexington s arrival to the Admiralty on 25 September, and also advised that Mr Bruff had subsequently fallen in with an eight-gun privateer but had been unable to take her because of his prize s poor condition. On the following day Elliot wrote seeking instructions as to what to do with his only fit prisoner, the American surgeon. Soon he received confirmation that the man should be put aboard the Proserpine 28, Captain Evelyn Sutton, and sent along to Portsmouth with instructions for the commander-in-chief, Admiral Sir Thomas Pye, to incarcerate him in Forton Prison.

Meanwhile at Plymouth Vice-Admiral Lord Molyneux Shuldham received orders to send Mr Bazely up to the Admiralty where he was to hand over some important papers found aboard his capture. The remaining American prisoners who had been brought into Plymouth aboard the Alert were placed in the Mill Prison. To their amazement their belongings were not stolen by their captors, and although Captain Johnson was asked to hand over his hanger he was allowed to draw on the vast amount of money he had with him over the following weeks.

On 29 September Mr Bazely was interviewed at the Admiralty by the sea-lord, Rear-Admiral Sir Hugh Palliser, who wrote of the young officer s high spirit to the first lord, Lord Sandwich, adding that he had instructed Bazely to remain in town pending a reward for his gallantry. Sure enough on 1 October the young officer was rewarded with promotion to the rank of commander. There was also interesting news to be passed on regarding correspondence from Benjamin Franklin that had been found on the prize, and telling information that seven Frenchmen had been discovered amongst the Lexington s crew.