Captain Jervis and the Foudroyant on Cruise – April to August 1777

In September 1775 the highly regarded Captain John Jervis was appointed to what could only be considered a plum command that was worthy of him the twenty-five year-old French built Foudroyant 80, which had been captured by Admiral Henry Osborn s fleet off Cartagena on 28 February 1758. For Jervis it was a case of being re-acquainted with an old friend, for as a lieutenant of the St. George 90, Captain Alexander Hood, carrying the flag of Rear-Admiral Sir Charles Saunders, it had been his honour to take the captured Foudroyant to England where she had been commissioned for the Navy. 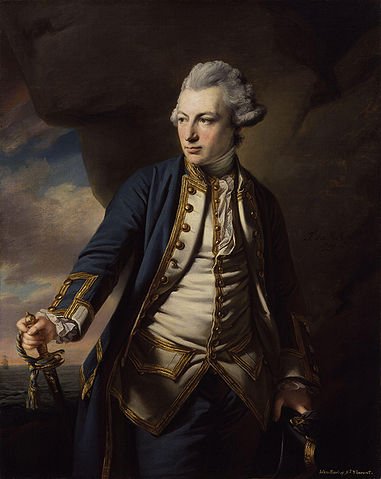 Having spent the previous winter at Plymouth, the Foudroyant was sent out from Portsmouth on 11 April 1777 to cruise in search of American shipping, and she soon made an early capture off the mouth of the Loire on 1 May when she took the Charleston sloop Alice, Captain John Porter, with a cargo of rice, indigo, pimento and tobacco. On 4 May the merchantman Barbara, Captain Welsh, arrived at Plymouth having been retaken by the Foudroyant after the privateer Freedom had captured her in passage from Bordeaux to Dublin with wine and brandy, and further success came to the south of Belle-Isle in the Bay of Biscay on 19 May when the Foudroyant captured the Finch, Captain John Adams, which schooner had been returning to America from Nantes with a cargo of arms, having previously delivered despatches for the rebel representatives in Paris, Benjamin Franklin and Silas Deane. This vessel was escorted into Plymouth when the Foudroyant returned there in May.

Having quickly returned to sea, the Foudroyant was cruising near Belle Isle at dawn on 23 June when she ran in with a division of the Brest fleet under the command of Commodore Jean-Toussaint-Guillaume de La Motte-Picquet de La Vinoyère. The French force, consisting of the pennant ship Robuste 74, together with the Réfléchi 64, Captain Didier-François-Honorat de Baraudin, Protée 64, Captain Charles Picot de Dampierre, and Curieuse 10, Chevalier Gouzillon de Bélizal, immediately set sail to come up with the Foudroyant, whilst the unimpressed Jervis, refusing to be intimidated, allowed them to close. The two countries were at peace, after all.

At 7 a.m. the French came alongside, and after exchanging the usual compliments the Foudroyant and Robuste 74 each sent boats over to the other with refreshments. La Motte-Picquet then asked Jervis for his permission to sail in company with the Foudroyant, which request the British captain rejected. Nothing deterred, La Motte-Picquet kept company with the Foudroyant for the rest of the day and the ensuing night, changing course whenever the British man-of-war did. Still refusing to be intimidated, Jervis made a careful note of the other ships in the French squadron and having eventually parted company he returned to Spithead on 5 July and reported the incident to the secretary to the Admiralty, Philip Stephens.

The Foudroyant resumed her cruise two weeks later, and at 4 a.m. on Wednesday 6 August, being thirty miles to the south of the Scilly Isles in fair weather and light winds, she spotted a brig to the south and gave chase. Unfortunately for Captain Jervis and his officers the calm conditions did not allow them to make any immediate progress on their prey, and indeed the latter benefited from the use of her sweeps to such effect that she was hull down by 7 p.m. Daybreak thankfully delivered more favourable elements for the ship of the line, and the chase was soon discovered to leeward. Now the Foudroyant spread all her canvas, and within an hour and a half she had driven the brig into Mounts Bay near Penzance in Cornwall where it anchored. Jervis brought the Foudroyant in to within a mile of the brig and sending a boat to take possession he also despatched two detachments of marines to pursue the crew who had landed and fled up Helston beach.

At 11 a.m. the first boat returned with nine prisoners who advised that their brig was the privateer Fancy 12, Commander John Lee, manned by eighty men. She had sailed from Marblehead seven weeks earlier and made four prizes, all of which had been sent back across the Atlantic. Throughout the rest of the day the Foudroyant remained at single anchor in the bay as her boats brought back more and more of the privateersmen. The hunt ashore was made in co-operation with the local gentry, and by the end of the day all but nine of the Americans had been captured.

Suspecting the remainder of the Americans to be in the hands of the local Cornish people, Jervis sailed for Plymouth where upon arrival on 10 August the privateersmen were committed to the Mill prison. Here they found harsh and Spartan conditions which were no doubt quite dissimilar to those they had enjoyed as Jervis’ prisoner, for the crusty commander had been praised by Captain Porter for his kindness to his prisoners. This was no doubt because as a staunch Whig and no friend of the war, Jervis was somewhat averse to counting the Americans as his enemies.