News of the outbreak of war with France had failed to reach the Jamaican-based frigate Minerva 32, Captain John Stott, when on 22 August she came across an unknown vessel whilst cruising near Cap Fran ois in the West Indies. Initially suspecting the stranger to be a merchantman, the Minerva closed in to establish her identity. She would be in for a fatal surprise.

It is fair to say that life had involved a series of surprises for Captain Stott. That he had ever made it to the rank of post captain at all had been a surprise, for having entered the navy through the hawsehole it had been as boatswain to the great Admiral Hon. Edward Boscawen that he had first been taken onto the quarterdeck and began his unlikely rise to the command of a frigate. Not long afterwards a greater personal surprise had been sprung upon him when, after arriving home from a three and a half years absence at sea, he had discovered a pregnant Mrs Stott with a two year-old daughter in tow. A well-publicised divorce had duly followed amidst rumours that the real father was old Admiral Boscawen himself. And had he lived to old age, Captain Stott would no doubt have been greatly surprised to find that a mischievous midshipman he had turned out of his ship for ridiculing his mistress, young Edward Pellew, had become arguably the greatest all-round officer of his age, and had eventually entered the House of Lords as Viscount Exmouth. 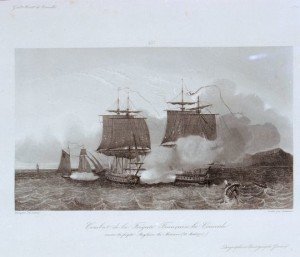 The Minerva and the Concorde do battle

Unfortunately though, Captain Stott did not live to see old age, for his defining surprise occurred on this day of 22 August 1778 when the stranger he was obliviously bearing down upon to investigate proved not to be an innocent merchantman. She was in fact the similarly-rated French frigate Concorde 32, commanded by the 45 year-old Captain Armand le Gardeur de Tilly, and unlike Captain Stott the Frenchman was fully aware that Britain and France were at war.

Quickly comprehending that the British frigate had not cleared for action, the Concorde opened fire with a full broadside which tore into her opponent, and she was even able to despatch another devastating salvo before the Minerva could respond. When Stott s frigate did manage to clear for action her men initially fought bravely, and as the two frigates were equally matched a closely fought engagement might have been envisaged. But then a mortal blow struck the Minerva when some powder exploded under the half-deck, leaving eighteen men killed or wounded and three guns disabled.

Thereafter the action continued in favour of the French, with the British response being further diminished when Captain Stott was carried below having twice been wounded in the head. Soon the Minerva s wheel was in pieces, her mizzen-mast was over the side, and the other masts were on the verge of collapse. Now the British seamen started to lose their nerve and began to flee their stations. When the first lieutenant fell wounded the remaining officers were unable to regain control, and after a two and a half hour action the decision was taken to strike the Minerva s colours.

Not long after the conclusion of the engagement Captain Stott and his first lieutenant succumbed to their wounds. The Minerva s remaining casualties were not established, but they far outweighed the French list of four men killed and fifteen wounded, including de Tilly s brother who had been aboard, and who later died of his wounds. The captured Minerve was taken into the French Navy as the Minerve.

On 4 January 1781 the Courageux 74, Captain Lord Mulgrave, recaptured the Minerva after a gallant and perhaps foolhardy resistance on behalf of the Frenchman, one that ended upon the approach of a second sail of the line, the Valiant 74, Captain Samuel Granston Goodall. The frigate was restored to British colours as the Recovery, and after employment in the latter stages of the American Revolutionary War was sold out of the service in 1784.

The aristocratic Captain de Tilly would later achieve the rank of admiral in the French Navy, and having survived imprisonment in the Terror of the early 1790 s he died at the age of 79 in 1812.