When the Mediterranean fleet was anchored off Gibraltar prior to sailing for the blockade of Toulon, the commander-in-chief, Vice-Admiral Lord Hood, formulated a devious plan that was so cunning in its aspiration as to entirely lose itself on the man who would be selected to put it into effect, the decent if somewhat unsophisticated Captain George Lumsdaine of the Iris 32. As a result the plan would be aborted, the unsympathetic Hood would be infuriated, and Captain Lumsdaine would end up facing a court-martial.

Upon being summoned to the flagship Victory 100 with Commander Thomas Byam Martin of the sloop Tisiphone 18, Lumsdaine was ordered to take the latter vessel, a transport, and the frigate Mermaid 32, Captain John Trigge, under his command and proceed to Tripoli with a consul-elect who would deliver gifts to the pasha as a solicitation to obtain the regular supply of fresh provisions that Hood needed for his fleet. This seemed a straightforward enough task, but both Lumsdaine and Martin were somewhat perplexed by a supplementary order to the effect that Lumsdaine should despatch Martin to sail alone three days ahead of his consorts into the port of Tunis and deliver a dispatch to Perkins Magra, the British agent and consul-general at the court of the bey. That Hood conveyed this supplementary order with obvious deliberation and an emphasis that the assignment could only be undertaken by a senior captain in whom he sincerely trusted, simply added to their confusion 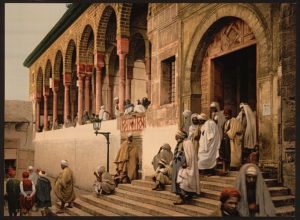 Tunis – Captain Martin’s apparent destination, although Lord Hood’s plan would have resulted in his capture before he reached the city.

Lumsdaine s small squadron departed Gibraltar and initially made its way along the African coast in such fine weather that the captains were able to take it in turns to dine with one another. Their arrival at Tripoli coincided with a local dispute between the pasha and his son, one that involved a great deal of wayward and inaccurate cannon fire that was barely a threat to either antagonist. More alarming was the disdainful manner in which the pasha greeted the new consul, and it took the threat of an immediate departure with his presents to prevail upon him the necessity of following the normal respectful protocols. In the event these protocols were exceeded in a lavish ceremony that saw Captain Lumsdaine, to his utter consternation, kissed by the pasha, an act that caused only the briefest amusement to Captain Martin before he was also accorded the same honour to the general laughter of the whole ensemble. The last laugh was on the pasha however, for within a few days he would be unseated by a new arrival from Constantinople who from the outset received the British contingent with good grace, despite being obliged to continue the fight against the ex-pasha s son. Thereafter the only discomfort for the British came when Captain Martin and Lieutenant Edward Brace of the Iris ventured too far inland and had to flee a party of hostile Arabs on horseback.

Pursuant to their orders, the squadron left Tripoli and shaped a course for Tunis, and as per Hood s instructions the Tisiphone was detached three days out of the port to enter it alone. Battling a stiff westerly wind, Captain Martin had barely lost sight of the two British frigates and the transport when on the second day he discovered a large French corvette ahead, to which he gave chase. After initially appearing to accept an engagement the French vessel set sail inshore for Port Farina, situated on the northern tip of modern day Tunisia, and here she anchored in neutral waters under the guns of a fort. With some regret Martin reminded his officers of the strict laws of neutrality and how misguided it would be to ignore them and thus offend a nation from whom Britain was anxious to secure supplies. Even so, this did not prevent him from sailing in as close as he dared to the corvette in the hope of provoking an engagement but it was to no avail – the enemy simply refused to become involved. Martin therefore put back to sea and sought out Captain Lumsdaine to apprise him of the situation before being detached once more to fulfil his original orders. By now of course Lumsdaine squadron was far less than the requisite three days behind the Tisiphone on its own course for Tunis.

On this occasion a brisk wind carried the Tisiphone back towards the African port at a race of knots, but as she rounded Cape Carthage and opened the bay of Tunis her officers became aware of a dozen French ships at anchor, including the sail of the line Duquesne 74. In the nick of time Martin shortened sail and threw out the signal enemy in sight to the distant Iris. Believing that Hood s orders had been negated by the circumstances of this discovery, Lumsdaine sailed in to reconnoitre the situation, took note of the strength of the enemy, and after consulting with his fellow captains despatched the Mermaid with a letter to Hood advising him of the French presence. With night coming on the remaining three British ships then bore away, whilst the French, believing that they had been discovered by the advance squadron of the British fleet, worked closer inshore and bolstered their defences.

On their return to the fleet Captains Lumsdaine and Martin were soon made to feel Hood s displeasure at the Tisiphone s failure to enter Tunis, and they were advised that the admiral was to bring them to a court martial for failing to adhere to his orders. It soon transpired that Hood had been fully aware of the large French presence in Tunis, but had purposefully withheld the fact from the hapless Lumsdaine in the expectation that by detaching the Tisiphone she would be captured by the enemy, thereby allowing the British to exact retribution by attacking French shipping in any neutral Mediterranean port they so wished.

Fortunately Captain Martin was able to talk himself out of facing a court-martial as he had followed his senior officer s orders at all times, but there was to be no reprieve for Lumsdaine. The Iris captain was hauled before a court aboard the Britannia 100 under the presidency of Vice-Admiral William Hotham and with the other members being Rear-Admirals Samuel Granston Goodall and Sir Hyde Parker, and Captains Skeffington Lutwidge, Samuel Reeve, Robert Manners Sutton, John Knight, John Matthews, Archibald Dickson, Charles Morice Pole, John Holloway, John Child Purvis and Benjamin Hallowell. The court s examination of the affair concluded that there was insufficient evidence against Lumsdaine to secure a conviction and he was acquitted of any wilful or improper disobedience, it being deemed that he had not shown any neglect in respect of his orders, but had rather shown prudence in not attempting to enter Tunis Bay where the enemy was harboured.

No doubt the verdict of the court enraged Hood yet further for he had been playing for high stakes, not least in the selection of Martin for the role of sacrificial lamb, given that he was the son of the influential Comptroller of the Navy, Captain Sir Henry Martin. The commander-in-chief would soon make amends with the young officer however, for in early November he would post him captain of the captured French frigate Modeste 36, an early step that would see Martin eventually ascend to the lofty position of admiral of the fleet fifty-six years later.