On 10 April 1794, the American privateer commander John Paul Jones departed Brest in command of the Ranger 18, having enjoyed the hospitality of the French Navy and the Congressional ambassador to Paris, Benjamin Franklin, whilst refitting his ship. His intention was to take the American War of Independence to the British Isles, and to inflict the sort of punishment that the colonial power had been doling out to coastal towns and shipping across the other side of the Atlantic Ocean.

Jones did not enjoy the reputation of an admirable man. Born in Scotland and the son of the Earl of Selkirk’s gardener, he had gone to sea as a young teenager and undertaken several voyages to the West Indies. Having risen through the merchant ranks he had first run afoul of the authorities after flogging a ship’s carpenter so viciously that the man’s death on his voyage home to Scotland had been attributed to this punishment. After being arrested and imprisoned in Kirkcudbright during 1770, Jones had been released on bail and fled back to sea, but not two years had gone by before he had cut down another man in a dispute over wages. Still fearing a trial in the civil court because of the first death, Jones, or the plain John Paul as he was then known, had decamped to America. At the exquisitely named Piscataway in New Jersey he had managed to talk himself into the command of a privateer by claiming an intensive knowledge of the Scottish coast, and at about this time he also added the additional surname of Jones to John Paul. 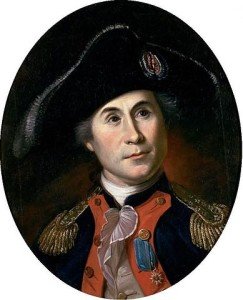 After sailing from Brest in the Ranger, Jones quickly captured or destroyed four small vessels in the Irish Sea, and on the morning of 20 April he appeared off the Carrickfergus lighthouse to discover the four-pounder naval sloop Drake 20, Commander George Burdon, in the bay. This vessel, along with the frigate Boston 32, Captain William Duddingston, and the armed ship Harpy 20, had earlier been ordered by the Admiralty to patrol the St. George’s Channel in protection of the trade. Requesting a pilot and then detaining a fishing boat and her crew who had come alongside, Jones sailed into the bay at 1.30 the next morning to close up on the Drake, but he had misjudged the weather conditions and was forced to cut his cable and flee after the anchor had been let go in a most disadvantageous position. He would later claim that the man detailed for the task of casting the anchor had been drunk, and that his officers, rather than inspiring the crew on this occasion, had unintentionally encouraged the indiscipline because they felt that there were no financial inducements in attempting the capture of a King’s ship.

Crossing the Irish Sea, Jones took to his boats with thirty-two men and led an attack upon the Cumbrian port of Whitehaven after midnight on 23 April. Having spiked the cannon of the small port’s ancient batteries, his intention to set fire to the town and the hundred and fifty or so ships packed high and dry in the harbour was subverted by a lack of fuel. A group of men despatched to raid a public house on the Old Quay in search of combustible material resorted to the more gratifying course of stopping for a drink, and by the time they returned it was nearing twilight. To compound their dereliction, a deserter from the ragged band by the name of David Freeman had raised the alarm in Marlborough Street at 3 a.m. Consequently, Jones and his men were rapidly forced to retreat from the enraged townsfolk before 4 a.m. and head for their ship, which had lain about two miles offshore. Although two surviving guns from a battery were fired at the boats, they were unable to score a hit, but the townsfolk at least managed to preserve their shipping by extinguishing the fire that the Americans had started on one coal ship, the Thompson, before it could reach the rigging and engulf the remainder of their fleet.

Jones next decided that it would be a good idea to kidnap his father’s ex-employer, Lord Selkirk, from his estate near Kirkcudbright and to use him as a hostage in return for the release of a number of American prisoners, or even for a bounteous ransom. Arriving in Kirkcudbright Bay at 10 a.m., his plot failed when His Lordship was inconveniently found to be absent from his residence, the House of St. Mary Isle; he was in fact in London. Even so, Jones’ men did not hesitate to terrorise the pregnant Lady Selkirk into giving up the family silver, although this was apparently against the wishes of their commander who fancied himself a gentleman above such piracy. That evening several fishing boats were taken off Belfast Loch but being determined to accomplish something more worthwhile than harassing the local aristocracy and fishermen, Jones returned to Carrickfergus Bay on the morning of the 24th where he found the Drake still at anchor. 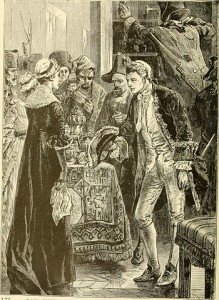 Upon the appearance off the harbour of the Ranger, the aged Commander Burdon brought the British sloop out of her anchorage at 7 a.m. and began working his way up against the light northerly breeze and tide to investigate. With progress slow, Burdon despatched a midshipman and a gunner’s mate with six men in a boat to ask the stranger’s captain his business. Why he did so was a mystery, as given the odd occurrence a few days before when the Ranger had tried to anchor alongside his sloop before fleeing, he was clearly aware that an American privateer was in the vicinity; indeed, the night before he had embarked several score soldiers and locals to boost his crew from one hundred-odd to one hundred and fifty-four. Not being a man to stand on ceremony, Jones simply hid his men below decks until the boat came alongside the Ranger and then un-chivalrously imprisoned the occupants and stood out to sea.

The loss of this junior officer and the gunner’s mate was a major blow to Commander Burdon, for not only was his existing crew mainly composed of pressed men and landsmen, let alone the new volunteers who had come aboard the night before, but he was also missing his lieutenant, George Stoddard, who had died of a fever two days earlier. Also absent was the boatswain, who had been killed whilst employed in the Impress Service, and the master’s mate and the gunner, who were hospitalised in Portsmouth. The latter would be badly missed, as the Drake’s powder was found to be poor, and for want of paper an insufficient number of cartridges would be provided for the cannon and muskets by the inexperienced acting-gunner. At least Burdon’s lack of support was somewhat alleviated when a recently married naval lieutenant by the name of William Dobbs came aboard at 1 p.m. to volunteer his services. This officer brought with him a letter addressed from Whitehaven to the Mayor of Belfast giving details of the American privateer’s attack on the Cumbrian port and a description of that vessel. It was one that matched the stranger.

As crowds of onlookers gathered to watch from the shore, the American privateer led the Drake out of the harbour and into North Channel under a strengthening easterly wind. At about 6 p.m. the two ships were within hail of each other, and when Dobbs shouted across to seek confirmation of the stranger’s identity Jones replied dramatically ‘The American Continental ship Ranger! It is time to begin!’ The volunteer lieutenant responded to the effect that as the Americans were waiting for the Drake she would soon be on the rebel’s larboard quarter. Being an ex-merchantman that was armed with her original guns, the British sloop carried a third less firepower than her opponent, and she had not been built to withstand a prolonged engagement with a man-of-war. Her intention was to win the engagement by grappling the American and sending her boarders and volunteers across to overwhelm the rebels.

The subsequent engagement could not have begun more disastrously for Commander Burdon and his inexperienced crew as Jones immediately wore ship and took his command across the British sloop’s bows, gaining an immediate ascendancy by raking her with his eighteen superior six-pounder cannon. The third broadside stuck down Lieutenant Dobbs, and even though the action continued at a range of half-pistol shot the Drake’s sixteen usable four-pounder pop-guns caused so little impact to the Ranger that the shot did not even pierce her sides. To make matters even worse, the useless cannons continually fell upon their muzzles, the gun-captains struggled to keep their matches alight, there was the scarcity of cartridges, and although the acting-gunner seemed to be doing his best the powder monkeys were bringing insufficient quantities of powder up from the magazine. Then when the American privateersmen opened with their swivel guns the British small-arms men were only able to respond for some thirty minutes before their muskets ran out of cartridges. 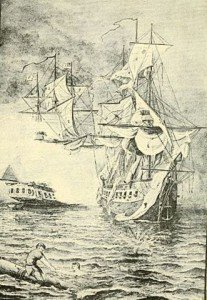 The Drake and the Ranger

The one-sided action was almost an hour old when Captain Burdon was killed by a musket ball to the head and the command devolved upon the sailing master, John Walsh. Soon the British sloop was unable to manoeuvre as her helm would not answer, her rigging and sails were in tatters, and three other men had been mortally wounded. By now most of the gun crews and small arms men had gone below, being unable to use the cannon or muskets, and only a dozen people remained on deck. After an action lasting seventy-four minutes, during which the Drake had the topsail yard and spritsail yard shot away, the sloop’s position was deemed to be hopeless and Mr Walsh agreed that the British colours, which had already been shot away twice, should come down.

Whilst the action had been underway Jones had kept his prisoners in irons below deck, but upon its completion he set some of them free and returned them to the shore via the fishing boats that he had so recently captured. Two days later, as the two ships sailed north around Ireland, Mr Dobbs succumbed to his wound and died. His death brought the casualty figures to five men dead and twenty wounded on the British side for the loss of two Americans killed and six wounded.

Jones took his prize back to Brest on 8 May where twenty Irishmen from the Drake’s crew switched their allegiance to him. His daring raid had certainly succeeded in bringing the war to the British Isles, but it had not altogether endeared him to Benjamin Franklin. The great man bitterly castigated Jones for the theft from Lady Selkirk and demanded that her property be restored. Jones duly wrote a flowery and kindly letter of apology, although whether this was at Franklin’s behest remains unknown. Some seven years after the theft he at least made greater amends by purchasing a stolen teapot and plate which he returned to the Selkirk Estate.

The court martial into the loss of the Drake eventually took place aboard the sloop Hyaena in Portsmouth Harbour on 17 November 1779 under the presidency of Captain Samuel Uvedale. The other members of the court were Captains Mark Robinson, John Brisbane, John Houlton, Sir Hyde Parker, William Dickson, George Montagu, Richard Rodney Bligh, John Bazely, Thomas Lloyd, Thomas Lenox Frederick and Walter Young. In the absence of his late captain, John Walsh and the remaining officers and crew were acquitted of any want of conduct or bravery, the loss being blamed upon the sloop s disability that had been caused by the damage she had incurred aloft.