Early in August 1780, one of the first eighteen-pounder frigates to be ordered for the British Navy, the Deptford-built Flora 36, Captain William Peere Williams, sailed from Spithead to link up with Admiral Francis Geary s Channel Fleet.

At 4.30 on the afternoon of the 10th she was off Ushant in search of the fleet when two vessels were sighted in the haze some four miles to leeward in the south-west, laying-to with their bows facing north. With the wind in the east north-east, Captain Williams eased down towards them, whereupon the larger of the two ships, the twelve-pounder French frigate Nymphe 32, Captain Chevalier Charles Marie de Trolong-Durumain, hauled her wind and backed her mizzen topsail to await him. The Nymphe s consort, a cutter, stood away. It would later be claimed that the meeting of the two frigates had been arranged following a challenge thrown out by Captain Durumain to Captain Williams when the former was anchored at Ushant. Certainly the Nymphe gave every indication of being willing to give battle. 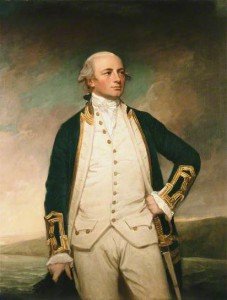 The Flora was a brand new frigate that had only been commissioned in the early summer. She was carrying twenty-six 18-pounder cannon and ten 9-pounders, in addition to eight of the newly assigned 18-pounder carronades on her poop and quarter-deck, giving her a broadside weight of metal of 333 pounds. She was manned by two hundred and fifty-nine officers and crew, and in every respect was as modern a fighting man-of-war as could be. The Nymphe had been launched four years earlier, and by contrast was carrying twenty-six 12-pounder cannon, and six six-pounder cannon, giving her a much smaller broadside weight of metal of just 174 pounds. Her crew numbered two hundred and ninety-one. As she lay too and calmly waited the approach of the Flora, the officers and men of the Nymphe were not to know that the forthcoming engagement would be the first in which the futuristic carronades would be used against a French vessel.

At 5.10 the Flora took in sail and hoisted her own colours, and the action commenced five minutes later when the Nymphe opened fire with her larboard broadside at a range of two cable lengths. Moving in, for over an hour the two frigates battered each other relentlessly from a matter of only one cable length, and about thirty minutes into the action Captain Durumain was injured by three musket balls, the command passing to Lieutenant Pennandref de Keranstret. Meanwhile one of the Flora s new 18-pounder carronades, manned by the boatswain and a boy, began to cause great a deal of damage to her opponent.

At 6.15 the under-gunned Nymphe suddenly gained the upper hand by shooting away the Flora s wheel and tiller rope, thereby disabling her. With her shrouds, rigging and back-stays in tatters the British frigate fell aboard her enemy, her spare anchor hooking on to the Frenchman s fore-shrouds. For another quarter of an hour the two vessels pounded each other at close quarters, whereupon the French suddenly rushed from their guns and attempted to board the Flora. They were quickly thrown back in great disarray and panic, and the momentum of the attack was lost when Lieutenant Pennandref fell dead, the next in command was lost between the hulls, and all the remaining officers were wounded. An explosion of a box of cartridges aboard the Frenchman added further to the carnage. 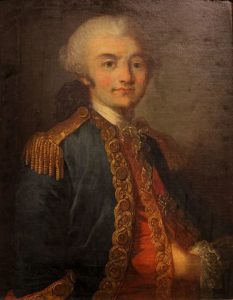 Realising the French confusion, Captain Williams decided to turn the tables on his enemy and send his own boarders across to the Nymphe, and these were led by the Flora s first lieutenant and thoroughgoing seaman, Edward Thornbrough. The Britons flooded aboard the Frenchman and in no time the enemy colours came down, with the surrender being made on the orders of the senior surviving officer, the badly wounded Lieutenant Sieur de Taillard.

The British had carried the Nymphe with the loss of only nine men killed and seventeen wounded, whilst inflicting casualties of fifty-five men killed and eighty-one wounded. Amongst the dead were the Nymphe s three senior officers, for the grievously wounded Captain Durumain lost his life in the hours after the engagement.

Following the action the Flora returned to Falmouth with her prize, from where Captain Williams wrote his victorious despatch to the Admiralty. Lieutenant Thornbrough was deservedly promoted to the rank of commander for his part in the action, and after being appointed to the armed ship Britannia 24 he went on to enjoy an unparalleled lengthy and distinguished career in the navy.

The Flora would enjoy another twenty-eight years in the service before she was wrecked off the Terschelling Reef on the Dutch coast in 1808 during a gale, having been beached when it was clear that she could not be saved. During her career she would enjoy another frigate engagement in 1781, this time with the Dutch, would be present at the Battle of the Saintes in 1782, and would make many profitable captures. The Nymphe also had a long and distinguished career, not least as the command of the brilliant Captain Sir Edward Pellew who captured another French frigate with her in 1793. She met her end when she was wrecked at the entrance to the Firth of Forth in 1810.