In September 1786 Captain Arthur Phillip was chosen to head an expedition to establish a convict colony and the first white settlement on the east coast of New Holland, which part of what is now known as Australia had been claimed and named New South Wales by Captain James Cook in 1770 during his first voyage of exploration. For remaining there as governor, Phillip would receive a salary of 500 guineas, whilst his second in command, an officer originally intended to be of master and commander rank, would receive a salary of 300 guineas as the lieutenant-governor.

Approaching his fiftieth year, Captain Phillip had seen service in a non-commissioned role during the Seven Years War, and after being promoted lieutenant had long lived the life of a country gentleman in Hampshire. A five year spell in the Portuguese Navy during the mid 1770 s had preceded a return to British colours and the command of a fireship in 1779, before at the relative old age of 43 he had been posted captain in 1781. Having become a trusted advisor to the new home and colonial secretary, Thomas Townsend, Phillip had then advocated and joined an expedition to attack the Spanish possessions in South America, although the dispersal of the squadron in a storm had forced the abandonment of that enterprise. Following the peace he had undertaken field intelligence work in the south of France, whereupon his patron Townsend, the now ennobled Viscount Sydney, had chosen him to lead the expedition to New Holland despite the opposition of the first lord of the Admiralty, Admiral Lord Howe, who considered Phillip insufficiently qualified. 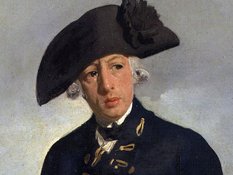 The officer selected as Phillip s deputy and lieutenant-governor, John Hunter, had seen far more action, but due to his humble origins had been even less fortunate with his own career progression, although he was a favourite of Howe s. Joining the Navy in 1754, he had obtained a wealth of experience in all aspects of seamanship, which supplementing his fertile mind and versatile practicality had seen him appointed a sailing master by the exacting Commodore Samuel Hood in the late 1760 s. Such was his growing reputation that when Lord Howe had taken over the command of the North American station in 1776 he had requested that Hunter join him aboard the flagship Eagle, and he had soon been accorded the honorary title of master of the fleet. Political machinations against Howe had delayed Hunter s deserved promotion to a commissioned role, but with his patron s return to favour following the fall of the government in 1782 Hunter had eventually been promoted to the rank of commander at the end of that year.

On 15 December 1786, with his part in the expedition to New Holland secured, Hunter was posted captain by Howe, and at the beginning of January 1787 Phillip was accorded the honour of an audience with the King at St. James Palace to celebrate his own appointment. By now the ex-Indiaman Sirius 24 had been nominated as Phillip s pennant ship for the expedition, and with Hunter holding her command Lieutenants William Bradley, Philip Gidley King and George William Maxwell were appointed to serve under him. The small tender Supply under the command of Lieutenant Henry Lidgbird Ball has also been commissioned to join the expedition.

Early in February it was reported from Portsmouth that the Sirius and Supply were off the port, and that Commodore Phillip was merely awaiting the bill for the management of the new colony to receive its royal assent before departing. Meanwhile back in London groups of convicts had been removed from Newgate Prison to a lighter at Blackfriars Bridge for conveyance to the prison hulks off Greenwich, prior to their eventual departure for Portsmouth and transportation to New South Wales. Also being despatched to the vessels that would make up the first fleet were all number of supplies and provisions that would enable the colony to survive in the short term, together with agricultural tools and numerous seeds and roots which would allow the settlers to begin planting, growing and harvesting their own food. The fact that the latter included a feed of a plant intriguingly named Mungol Wargell, or the Root of Scarcity, suggested that nothing was being left to chance.

Finally on 18 April the King s commission appointing Phillip as governor and captain-general of the new colony arrived, and it seemed that all that the expedition required to sail was a fair wind. Even so there were further delays, with Phillip only reaching Portsmouth on 9 May, and thus it was not until the early morning of the 13th that the fleet departed the Motherbank for the Antipodes. In total there were eleven ships in the fleet, with the Sirius and Supply being joined by three storeships and six transports carrying eight hundred convicts, of which a quarter were women. A guard of one hundred and sixty marines had been placed upon the transports, and many of those men were taking their families out to the new settlement. An escort out of British waters was provided by the Hyaena 20, Captain Hon. Michael de Courcy.

The character of the men being transported soon became evident when a plan by the prisoners to seize the convict ship Countess of Scarborough was discovered. Having dealt with that distraction Phillip continued with the voyage, and after watering at Tenerife in early June the fleet spent most of August at Rio de Janeiro, where repairs were effected and fresh provisions purchased. Leaving the Brazils on 4 September, the ships reached the Cape of Good Hope on 13 October and additional livestock and fresh provisions were taken aboard before their departure for the Indian Ocean on 12 November. Two weeks later Phillip shifted his broad pennant into the Supply in order to sail ahead of the main party with three of the faster convict vessels, but foul weather meant that when he did reach Botany Bay on 18 January 1788 it was only a couple of days before he was joined by the remainder of the fleet.

Upon the recommendation of Sir Joseph Banks, who had sailed with Cook on his first voyage, Botany Bay had been intended as the site of any settlement, but as soon as the first fleet arrived it became apparent to Phillip that this location was not feasible. He therefore sailed around to Port Jackson four days later with a small party including Captain Hunter, and here fresh water, fertile soil and a sound anchorage held out a greater promise. On returning to Botany Bay to gather the rest of the fleet Phillip was astonished to find two further vessels off the coast, and these were soon established to be those of a French expedition led by Jean Fran ois de Galaup, the Comte de Lap rouse, who clearly had knowledge of the British intention to create a colony and had expected to be able to purchase supplies. In this he was to be disappointed, and after hanging around for the better part of two and a half weeks, during which time the two parties treated each other courteously, the French departed. Sadly they were never seen again, and later investigations would conclude that the two ships had foundered on Vanikoro Island in the Santa Cruz group.

In the meantime the British expedition had sailed around to Port Jackson where, on 26 January 1788, the new colony was named Sydney in honour of the secretary of state, Viscount Sydney. On the 7 February a government was formed, but it soon became apparent that the local soil was still insufficiently fertile to guarantee a satisfactory crop that would sustain the thousand or so members of the settlement, and so in October the Sirius was despatched under Hunter to the Cape for supplies, a voyage he would undertake via Cape Horn.

Within the colony prospects remained bleak, and matters were little helped by the convicts apathy towards their new lifestyle and their inherent laziness. The situation barely improved following the return of the Sirius and the arrival of other vessels laden with provisions in May 1789, and with no news from England, the marines in a state of almost open mutiny, and everybody on half rations, it took all of Phillip s immense character and humanity to keep order in the colony throughout the winter. Although the following September saw an improvement in the food supply, the subsistence of the colony took up the majority of Phillip s time, and apart from a second visit to Botany Bay in March 1788 it was not until April 1791 that further explorations could begin in earnest. 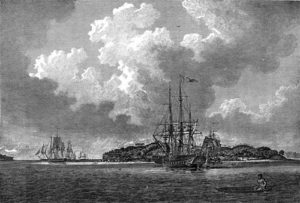 Meanwhile in early 1790 Captain Hunter had been sent to form a settlement on Norfolk Island, some nine hundred miles to the east, it having been reported by Lieutenant King that the environment there was more conducive to providing subsistence for the Europeans. With Hunter sailed over two hundred convicts, a detachment of marines, and the Supply, but having disembarked the human cargo but not their provisions on 13 March disaster struck when the Sirius was blown out to sea and then driven onto a reef and bilged whilst trying to regain the bay six days later. By ingeniously floating a line ashore her crew were able to secure a substantial seven inch hawser to a tree and in groups of three or four they were hauled through the surf to safety. The provisions could not be recovered however, and although the Supply sailed away to secure extra supplies it was not until August that two relief vessels arrived from Port Jackson.

Back at Sydney the colony was gradually prospering, but by December 1791 Captain Philip was himself in poor health. Contrary to the wishes of the government he demanded a return home, and the request being granted he eventually arrived at Falmouth in May 1793, having taken passage in the Atlantic commanded by a most promising young lieutenant, Richard Bowen. With him he brought four kangaroos and an aboriginal man and boy, although sadly the British climate took its toll on the latter and he did not survive to see his homeland again.

Captain Hunter had previously arrived home in April 1792 aboard the brig Waakzaamheid, and although he later returned to New South Wales as the second governor in 1795 his tenure was cut short by a dispute with the military. After coming back to England in 1801 he saw active service at the beginning of the Napoleonic War, yet his greatest achievement was when he displayed his immense experience and seamanship in ensuring the safety of all of the crew of his command, the Venerable 74, after she had been wrecked off Paignton in 1804.

Of the remaining four commissioned officers who sailed with the First Fleet, Lieutenant Bradley was to see active service throughout the next twenty years as a post captain until mental illness eventually led him to a minor defrauding of the post office, for which crime he received a death sentence that was commuted on appeal. Lieutenant King went home in 1790 but promptly sailed back to become the governor of Norfolk Island, and after returning to England again in 1796 he was appointed to succeed Hunter as the third governor of New South Wales in 1800, his successor six years later being the infamous Captain William Bligh. Lieutenant Maxwell also suffered a mental disintegration, and after being declared insane in 1789 he embarked with Captain Hunter on the Waakzaamheid in 1791, only to die at sea a few weeks later. Finally Lieutenant Ball returned to England in April 1792, was posted captain three years later, and eventually rose with seniority to become an admiral.