When intelligence was received that the trade in the waters around Barbados was about to be attacked by a group of American privateers from South Carolina, the British merchantmen were ordered to remain in port whilst the Yarmouth 64, Captain Nicholas Vincent, was sent to seek them out and destroy them. 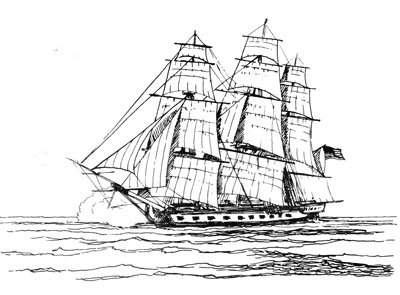 At 5.30 p.m. on 7 March the Yarmouth was sailing under clear skies some one hundred and fifty miles to the east of Barbados when she observed some six sail to larboard in the south-west, standing to the north. Giving chase, it soon became evident that the strangers consisted of two ships, three brigs and a schooner, and benefitting from the weather-gauge Captain Vincent decided to ignore the lesser vessels and go after the largest, which was at that time ahead of her consorts. She would prove to be the Continental frigate Randolph 32, which had sailed with the small squadron from Charleston for the West Indies on 14 February.

The Yarmouth was a very old vessel, having first been commissioned in 1745. A veteran of five battles including three in the East Indies during the Seven Years’ War, she had a nominal armament of twenty-six 32-pounder cannons on her lower gun-deck, twenty-six 18–pounder cannons on her upper gun-deck, and twelve 9-pounder cannons on her quarterdeck and forecastle, giving her a broadside weight of metal of seven hundred and four pounds. Crewed by some four hundred and eighty men, her commander, Nicholas Vincent, was an experienced officer in his fifties with thirty years experience as a captain, who had enjoyed almost full employment throughout his career despite having the stain of a charge of cowardice on his record in the Seven Years’ War, a charge for which he had been found partially guilty and dismissed his ship.

Armed with twenty-six 12-pounder cannons on her gun-deck and ten 6-pounder cannons on her quarterdeck and forecastle, the two year-old Randolph had a much smaller broadside weight of metal of one hundred and eighty-six pounds. She was manned by a crew of three hundred and fifteen and commanded by the 28-year-old Captain Nicholas Biddle, who five years earlier had served in the British Navy as a midshipman with Captain Hon. Constantine Phipps’ expedition to the Arctic, becoming acquainted with no less a young officer than Horatio Nelson.

After a four-hour pursuit, Captain Vincent got up on the weather quarter of the Randolph, and at about 9 p.m. he hailed her with a demand that she reveal her identity by running up her colours. In response the rebel flag of the American Congress was raised, and the frigate fired a full broadside into the Yarmouth. A twenty minute or so engagement then ensued in which the second American ship, which was later discovered to be the privateer General Moultrie 20, added her cannon to the fray. During this action, the Yarmouth’s heavier 32-pounder main-deck cannons gave her a significant advantage over her two smaller opponents, even though the frigate was able to fire at least three broadsides to her one. But then in a blinding flash the engagement came to a sudden end when the Randolph dramatically blew up.

Being to windward, the Yarmouth escaped serious harm from the resulting debris, but she was still struck by a great deal of burning wreckage, including a six feet piece of timber that struck her poop, and another piece that temporarily became enmeshed in the fore-topgallant sail before tumbling on to the cap. The suggestion that ‘providence’ alone had spared the Yarmouth was enhanced with the arrival on the forecastle of a rolled-up unblemished American ensign that had somehow survived the blast without so much as being burned. During the action and the subsequent explosion, the Yarmouth lost five men killed and suffered twelve men wounded.

The remaining American vessels now all fled the scene in different directions, easily outsailing the Yarmouth whose sails and rigging had been much damaged in the engagement. In vain the Yarmouth concentrated on the pursuit of the second enemy ship, the General Moultrie, but she was unable to close with her, and after losing contact in the night Vincent returned to Barbados.

There was a footnote to this engagement when in the process of chasing another sail five days later, the Yarmouth’s masthead lookout spotted movement on a piece of wreckage. Closer inspection revealed four men in distress. Forgoing the chase in the spirit of humanity, Captain Vincent ordered the Yarmouth to haul her wind and a boat was sent to the rescue. Once the men were brought aboard they were able to reveal that they were survivors of the destruction of the Randolph. They reported that Captain Biddle had been wounded in the thigh during the early part of the action and was having his wound attended to whilst sitting on a chair on deck when the explosion had occurred. After being blown out of the cabin the men had been able to rescue a large blanket and had survived by sucking in the rainwater collected in its cloth.